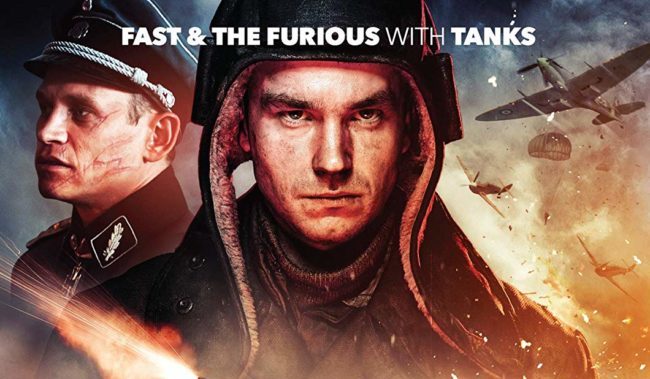 On paper the story of Iron Fury (2018) is an intriguing one. A Russian film about a Soviet tank crew who are captured as prisoners of war after a tank battle in 1941 following the German invasion of Russia that Summer. They are sent to a concentration camp in the state of Thuringia in Germany (which is probably meant to be Buchenwald as this was the only major concentration camp in Thuringia, but was filmed at the real former concentration camp in Theresienstadt, Czechoslovakia). There they are treated cruelly by the SS. When the tank crew are tasked to restore a damaged captured T-34 Soviet tank filled with dead bodies and, as it happens a few live shells. They plot to restore the vehicle and break out, fighting their way to Soviet lines.

Of course no such story ever happened and the Nazis would never have been dumb enough to allow prisoners to restore a tank! The Russian title of the film was T-34, which is probably a better one than the title of its release in the UK. But that is the least of the film’s problems. The tag line for the film is “Fast and Furious with Tanks”, which probably says all you need to know aout Iron Fury. “Tanknado” might have been more appropriate. It has to be one of the most dumbed down films committed to the screen, surprising given the opportunities presented. This dumbing down of the film has to be partly blamed on the dreadful American accents in the dubbing; a shame that the original Russian language options or version was not made available by 101 Films, the DVD’s release; it must rank up there with one of the worst examples of dubbing of any UK release. One is almost relieved when the nasty Germans show up and we hear German language.

The opening tank battle generates mixed feelings. The filmmakers went to great lengths with the scene, building a small village in the Kaluga region of western Russia in order the fighting Panzers and Russian tanks can charge through the dwellings. The slow motion shots of shells being fired out of the canons and richocheting off the opponent’s tank or exploding is not only overdone, but appears ridiculous and cartoony. Throughout the film there is little sense of the terror of being in a tank in a battle zone, a concentration camp or being shot at by a fearsome enemy. The heroics are absurd and do little more than belittle the real life heroics of those who fought fearlessly against the brutality of the Nazis, whether it were the tank battles on the Russian Steppes, Stalingrad or the brutal treatment they faced as PoWs (most Soviet prisoners were not shown the same respect as Western European PoWs and instead were either left to starve and freeze or sent to concentration camps to die).

Some of the actors have good faces for the roles, whether it is some of the tank crew or of the nemesis SS Officer, Jager (Vinzenz Kiefer), but the nice looking girl concentration camp prisoner who works as a servant for Jager (Irina Starshenbaum) is ridiculously good looking and well kept for a prisoner enduring such captivity.

What sits so uncomfortably with the film is the degree with which it goes into attention to detail with uniforms, using an old T-34 Soviet tank and actually even uses parts of a real former camp. And then there is the faux heroics, dumb dialogue and ridiculous situations. This kind of war film is not without precedent and war parody was done much better in such films as Kelly’s Heroes (1970) or even Inglorious Basterds (2009, although this film is overrated) and even the TV comedies like Hogan’s Heroes (1965-71) and ‘Allo ‘Allo (1982-92). This is not to say that films set in concentration camps can’t be spoofed as Life is Beautiful (1997) ably showed us.

Iron Fury is released by 101 Films with no extras.