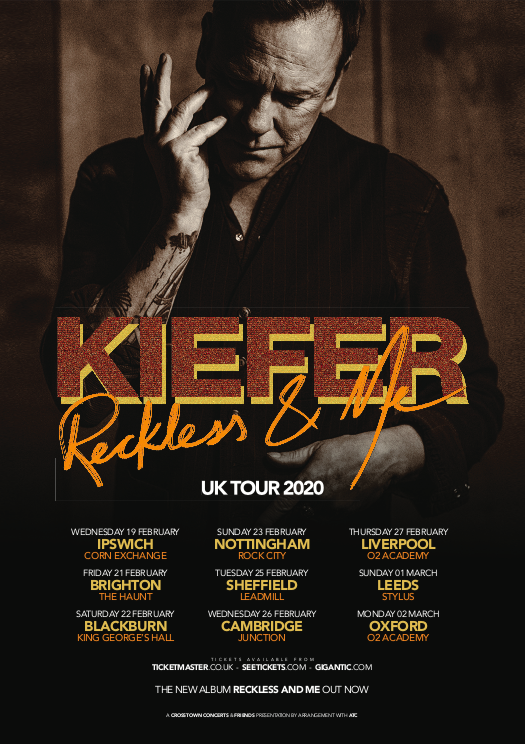 Kiefer Sutherland heads back to the UK & Ireland

Kiefer Sutherland will be returning to the UK next month for a string of UK dates (full dates below). Sutherland‘s second album, the 10-song ‘Reckless & Me’, arrived last year on a wave of praise and a deluxe edition of the album is also available now via BMG. ‘Reckless & Me Special Edition’ includes the original album along with a bonus disc featuring Sutherland’s full concert in Berlin. Recorded on March 1, 2019 at SchwuZ in Berlin, Germany, the live disc captures an energetic and dynamically-tight set from Kiefer and his band.

‘Reckless & Me’ delivers Sutherland’s Americana and country rock-infused songwriting style and highlights his gift of soulful storytelling. On the bonus disc, ‘Live In Berlin’, Sutherland gets to dive deeper into storytelling and reveals some personal anecdotes behind the songs.

“We’ve played so many shows over the past five years, to have one of them recorded so that fans who couldn’t make a show because we didn’t play in their particular town or city, is very special to me. I hope you enjoy listening to it as much as we enjoyed playing it”.

‘Reckless & Me’ holds beautifully arranged ballads and authentic country rockers such as the album’s lead single, ‘Open Road’, ‘This Is How It’s Done’ and ‘Something You Love’ – all delivered with Sutherland’s distinctive, whiskey-soaked and gravel-laced voice. Produced by Jude Cole, ‘Reckless & Me’ marks the follow up to Sutherland’s critically acclaimed debut album, ‘Down In A Hole’ (2016).

Tickets can be bought at: https://kiefersutherland.net/tickets