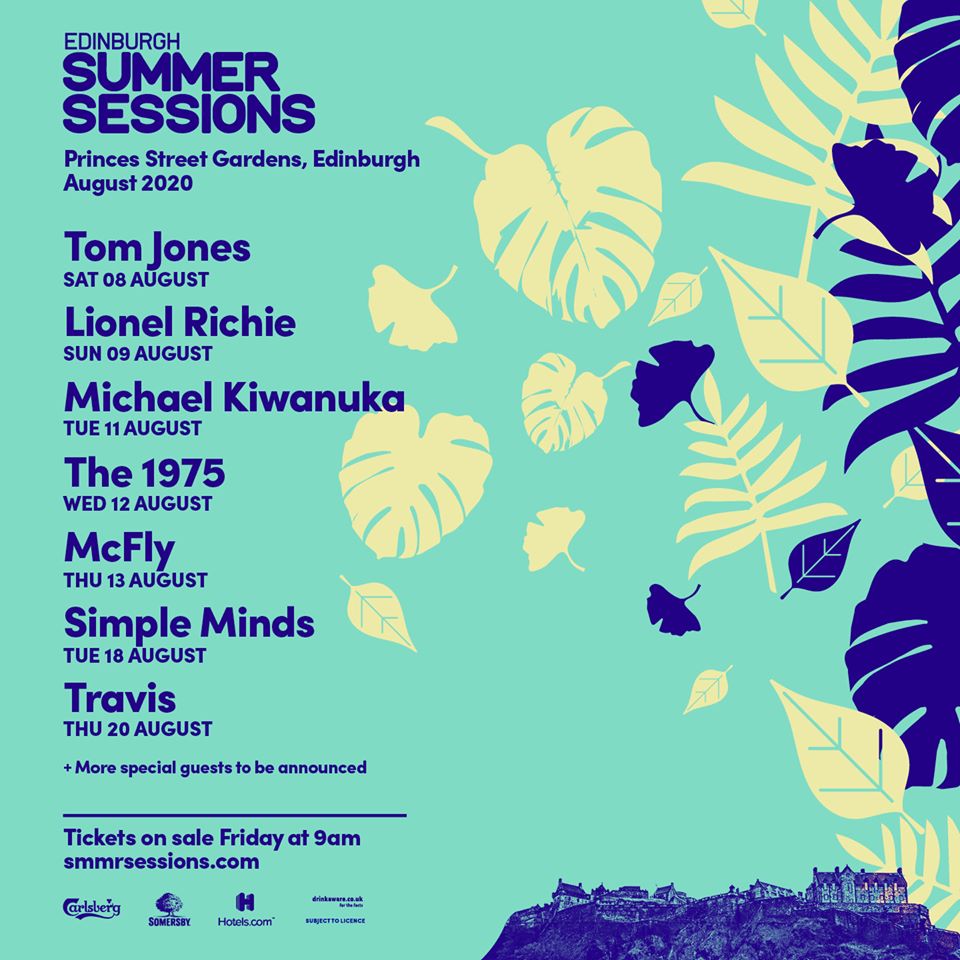 With a plethora of Grammy, BRIT, NME, Ivor Novello, Mercury Music Prize and even Golden Globe and Oscar award winners and nominees on this year’s Edinburgh Summer Sessions bill, the festival will be a truly unique landmark event in the UK’s 2020 music calendar.

Set to return to Edinburgh Summer Sessions after opening the festival’s inaugural year, Tom Jones headlines on Saturday 8th August. One of the most influential showmen in music, the singers’ appearance at the 2018 festival went down a storm as Tom Jones opened proceedings fully clad in a tartan jacket. Expect timeless classics like ‘It’s Not Unusual’ and ‘Sex Bomb’ plus non-stop entertainment from one of the UK’s biggest superstars on what is set to be an unforgettable Saturday night in the capital.

Lionel Richie will make his Summer Sessions festival debut on 9th August as another international superstar brings his talents, and a discography like no other, to Princes Street Gardens. With timeless pop hits such as ‘Hello’, ‘Endless Love’ and ‘All Night Long’, Lionel Richie is a true music icon who will make his return to Edinburgh after over five years away from the city.

Lionel Richie said, “I’m really looking forward to heading back to Scotland next summer, the crowds are some of the best in the world and I can’t wait to get back over there to see you all!”

This year’s award-winning line-up includes Michael Kiwanuka, nominated for two Brit Awards in 2020 and whose album was hailed as “one of the greatest of the decade” by The Guardian. The London singer-songwriter has established himself as one of the UK’s most gifted and unpredictable of artists with the release of his compelling and broadly acclaimed self-titled third album last year.  Fans can expect a night of revelatory, triumphant sounds from Kiwanuka, perfect in the serene surrounding on a summer evening in the capital, making him a truly outstanding addition to this year’s line-up on 11th August.

Playing one of their most intimate Scottish shows since the band transcended to arena settings, The 1975’s fans are set to be treated to new music as the four-piece make their Edinburgh Summer Sessions festival debut in August. With their highly anticipated fourth album due for release in April the band, fronted by the charismatic Matty Healy, will perform their biggest festival tunes like ‘Chocolate’ and ‘It’s Not Living (If It’s Not With You)’ alongside latest single ‘Me & You Together Song’ on 12th August.

Pop rock boyband McFly will be welcomed to the festival on 13th August as they continue their massive comeback, after a hiatus. The band released some of the most successful pop songs of the 2000s and now fans have the chance to watch McFly in one of the most intimate concert settings in the country. With classic hits like ‘Five Colours In Her Hair’ and ‘All About You’, their electric performance at Summer Sessions will be a singalong pop extravaganza.

McFly said, “We’re so excited to play Edinburgh Summer Sessions for the first time ever. It’s going to be an amazing show in front of Edinburgh Castle and we really can’t wait to get back to Scotland – see you this summer!”

Scotland’s most successful rock band ever, Simple Minds, join the 2020 line-up as they headline on 18th August. With one of the most iconic back catalogues in the world and celebrating 40 years of hits this year, the legendary Glasgow band are responsible for huge anthems that will go down a storm with the Edinburgh Summer Sessions crowd, like the classic ‘Don’t You (Forget About Me)’ ‘Alive and Kicking’ and ‘Belfast Child’.

Jim Kerr said: “Among the 100 plus shows we have lined up for our upcoming World tour, we are delighted to now be added to the line-up for Edinburgh Summer Sessions. No one enjoys playing in Scotland more than we do, and we are sure that Simple Minds fans from far and wide will want to join us for what is set to be a memorable concert in our capital city. We look forward to it immensely!”