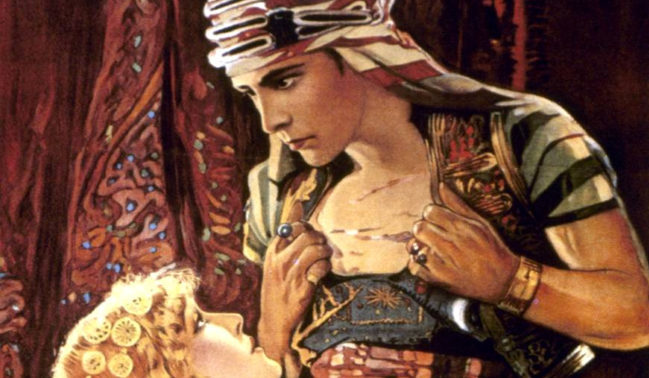 Rudolph Valentino was arguably one of the first superstars of cinema. Buff, good looking, square jawed and every woman’s dream hero, he was the perfect as an imaginary romantic hero. Setting this romance in an imaginary Middle East is as Orientalist as any painting by Lawrence Alma-Tadema in both its Western interpretation, its exoticism and romance.

Released by Eureka Entertainment in their Classics series and sporting a nice design of the poster on the sleeve, The Son of the Sheik (1926) is a sequel to the earlier The Sheik (1921), the Italian born, and it is said, sexually ambiguous romantic was as David Cairns describes in a featurette, ‘Loitering Within Tent’ on the disc as loved by women, hated by men. By the time the sequel was made, Valentino was by now an established star and at least some of the sexual aggression of The Sheik was toned down. This and the previous film were adapted from a novel by romantic English novelist Edith Hull, whom Cairns compares to the E.L. James and her ‘Fifty Shades of Grey’ books of their age. The books and the first film demonstrated a now very controversial impression that the Western character of Diana was raped, but seemed to like it. This aspect is toned down in both films and more so in The Son of the Sheik.

The film is by no means an arthouse classic, but what it is, is an example of popular culture as to a box-office draw. It draws closely on the narrative of the films predecessor. The plot is a simple one with Vilma Banky playing a dancer (a prostitute or slave, or both?) who has caught the eye of the Sheik’s adventerous sonAhmed (both parts are played by Valentino), but when both are kidnapped and tortured by rival tribes, Ahmed believes that it is she who betrayed him. This of course leads to an erotic love-hate clash that will inevitably lead to them coming together.

Valentino is hammy when playing the father and uses some occasional odd split screen when they’re together. The women and of course Valentino look very Western with the two women in the film are called Yasmin (Banky) and Lady Diana (Agnes Ayres reprising her role from The Sheik), while all the other characters are devious and sly in the Western imagination of the Orientalist world.

Rudolph Valentino died just two weeks before the films release from the effects of peritonitis at the young age of 31. Famously women were said to have committed suicide as a result of his early death. This should have ensured his legend and in many ways it did. It was not long before he was recognised as not having been a good actor and merely a good looking icon and indeed his performance to a modern audience appears somewhat hammy.

In the Hollywood imagination at least, Orientalism continued to thrive as an other worldly place with the Latin Lover being transferred to the Arabic world while the women are very Western looking. The only realist aspect to the film are the magnificent desert locations of the sand dunes of the Yuma Desert, Arizona which are splendid with some aspects maybe recalling the exploits of a British officer, T.E. Lawrence or Lawrence of Arabia, the westerner playing at being an Arab during the First World War, who’s exploits had also fired the public imagination. The film does otherwise contain some wonderful production design by William Cameron Menzies who would go on to be production designer to many big films as well as becoming a director.