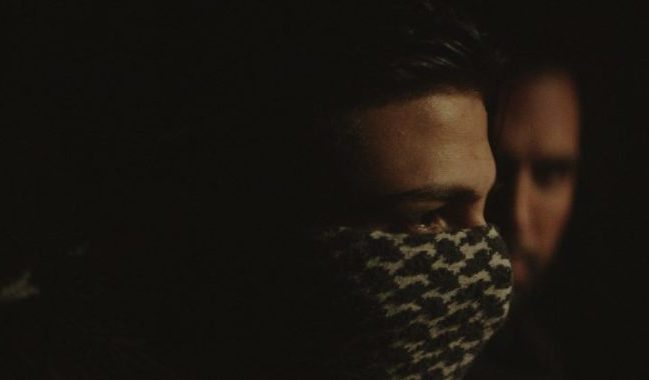 Released on Montage Pictures, an offshoot label of Eureka Entertainment is the highly acclaimed Danish film, Sons of Denmark (2019). The film tackles the European challenge of the age headfirst. This makes the timing of Salim’s film all the more poignant. It is a very poignant and powerful film that draws on both anxieties of the day and live issues across Europe. Indeed, that this film is Danish and has Denmark in the title is in itself irrelevant and could be set and made in any European country across the continent and of course also in the UK.

The film is set 5 years in the future and opens with a terrorist attack in the Nørreport quarter of Copenhagen that kills 24 people. A year later a populist far right politician, Martin Nordahl (Rasmus Bjorg) is exploiting the atrocity and is at a plaque commemorating the attack. He is being interviewed by a TV crew about his rise in popularity. Meanwhile, a far right group of neo-nazis, Sons of Denmark have been stoking tensions and carrying out attacks against the immigrant Muslim communities, many of whom have fled war and persecution in countries such as Iraq and Syria. Nordahl is making similar veiled threats as Sons of Denmark about ‘repatriating’ those who are non-Danes with no mention of whether this includes other Europeans or causcasians from outside or inside Europe. Naurally, the Muslim community is particularly concerned. One of the concerned is a young man called Zakaria (Mohammed Ismael Mohammed), recruited by an elder neighbour who convinces Zakaria that action needs to be taken against those perpetrating the attacks. They attack a Sons of Denmark meeting with the escalation of violence between the two sides now intensifying.

Zakaria works with another Muslim man, Malik (Zaki Youssef) who takes Zakaria to the country to train him how to use a gun and to carry out a covert attack and is later made welcome in Zakaria’s home by his mother. Zakaria breaks into Nordahl’s home, only to find he has been set up by Malik and is arrested and eventually sent to prison. Despite being personally praised by Nordahl as being “different from the others”, in time Malik begins to feel guilt and has misgivings, starting him on the course of turning against his former paymaster.

Like many of the Montage Pictures releases, Sons of Denmark is a debut directorial feature for Ulaa Salim, a Danish born immigrant of Iraqi parents. Salim has made a number of short films before making this his first feature with much of his work being informed by his duality of living with two cultures. The genesis of the story of Sons of Denmark were born out over several years since he was a student and the timing of the film seems to become more relevant over the years. Of course in 2015-16 the refugee crisis was a front page story for days and months, particularly for the right wing tabloid press. As a humanitarian call, Sweden and paricularly German opened its doors to those fleeing war in Syria and Isis in Iraq and Syria, along with economic migrants from elsewhere around the world. This of course led to an inevitable rise by far right groups opposed to immigrants, especially those from the Muslim world, stoking fears of terrorism. During the 2015 crisis the strain was also felt by Denmark. In 2016 there were concerns raised by Danish politicians that some of those who had entered the country were radical Muslims. All this makes the timing of Salim’s film poignant. Of course he is not neutral on the subject, but nevertheless he realistically handles the subject and although Nordahl is the villain of the piece he does not treat him as a cartoon character, yet nevertheless is still a sinister devious nasty piece of work with public appeal.

The end of the film is quite shocking, yet remains plausible. Salim encouraged the cast of mostly non-professionals to improv, giving the film its spontaneity. Culturally too, women in the film are treated as observers or fall into traditional roles as housewives or mothers such as Nordahl’s passive wife or Zakaria’s welcoming and loving mother. Otherwise Sons of Denmark is most definately a European film of its age and is released on Montage Pictures in dual format. Asides from a trailer there are no extas on the disc.