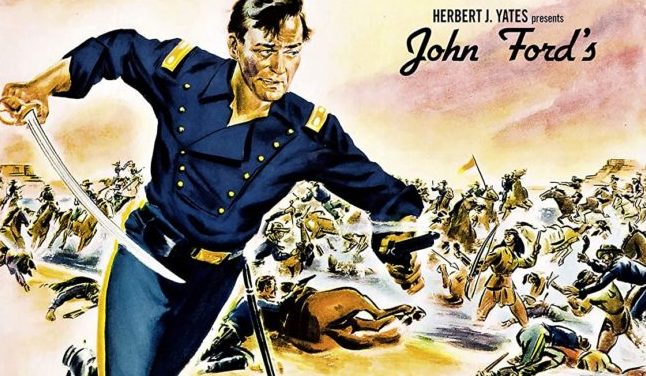 Joining The Quiet Man (1952) and Two Rode Together (1961) in Eureka Entertainment’s dual format Masters of Cinema series is one of John Ford’s cavalry films, Rio Grande (1950). Indeed, this was the third and final of Ford’s cavalry trilogy, following Fort Apache (1948) (starring Henry Fonda and John Wayne) and She Wore a Yellow Ribbon (1949) (with Wayne). All three films were shot in Ford’s beloved Moab, Utah and Monument Valley, although they were seldom set in these areas, with the Colorado River in this film doubling for the Rio Grande, the river that separates the United States with Mexico. Indeed the cavalry trilogy represent the most typical tropes of a John Ford Western. If Hollywood mythologised the Western genre, then John Ford turned his westerns into icons.

The opening title sequence of Rio Grande is as typical and signature as any film of the master’s. We see shots (in black and white) of Monument Valley, a trooper silhouetted against the Big Sky and the typical serifed titles, as well as a score by Victor Young that would always heavily punctuate the emotions of a John Ford film. A the cavalry patrol returns from a skermish with their wounded and look fatigued, all shot silently without dialogue. 18 new recruits (of an expected 180) arrive at the tented outpost, one of which turns out to be Lieutenant-Colonel Kirby Yorke’s (Wayne) son, Trooper Jefferson Yorke (Claude Jarman Jr.) who has arrived having not seen his father for 15 years, since Yorke had left to fight for the Confederacy in the American Civil War. Yorke Snr. is angry at his son, a failure at West Point. His son makes it quite clear that he is here to do his duty. This is classic Ford machismo and few actors could present this better than Wayne in a Ford movie.

One of the most extraordinary scenes in the film is the Roman horse riding stunt as the new recruits (including Jarman and John Ford regulars, Ben Johnson and Harry Carey Jr.) all perform their own stunts. Most film producers would have fits seeing this, but thankfully Ford was a law unto himself. A short while later, Mrs. Yorke, Jefferson’s mother Kathleen (Maureen O’Hara) also arrives with the intention of taking their son away and finalising her separation from the big man. However, young Jefferson doesn’t wish to leave as he has a strong sense of duty.

This is the thrust for the majority of the plot. Layered onto this is the skermishs being carried out by Natchez and his Apaches who raid and then run across the Rio Grande to Mexico (where of course the US Army have no juristiction). Wayne being Wayne of course has a plan and will break the rules to get the end result. It’s all classic John Ford. Machismo and masculinity, as with most of Ford’s movies is again at the very heart of the film as the men pit themselves against the frontiers of the usual Ford landscapes of Utah (standing in for Texas) facing off the noble savage, though here, as in most of the great man’s films the Indian is less noble and more savage. Wayne’s character is too macho to show pride for his son, too macho to show any emotion or compassion and too macho to show any sentiment at a troop serenading his wife with the ballad ‘Kathleen’. Once played the ballad becomes a continual motif throughout the film. This song, as well as all the others in the film are performed by Ford’s favourite group, Sons of the Pioneers. In fact in this film more than any other they are present singing many tunes. They later sang the wonderful theme song to one of the greatest Westerns of all time, The Searchers (1956), also starring John Wayne.

Indeed, the film is once again supported by the regular cast and crew of a Ford Western, his stock company. Asides from Wayne and O’Hara, there is the burly Irishman Victor McLaglen who had been acting in many films with Ford for years, Ben Johnson, Harry Carey Jr. and Steve Pendleton. McLaglen also provides a good deal of comic relief as the tough, broken nosed bare knuckle fighting Sergeant-Major, Quincannon. It is also very easy to place a John Ford Western in time. They were nearly all set in the 1870s and this one talks about 15 years after Shennandoah which make it 1879.

It’s surprising to learn that this film was a contractual obligation to secure funding for Ford’s pet project, The Quiet Man (1952) which also starred Wayne with O’Hara (and what screen chemistry they always had), finally made and released in Ireland 2 years later. Rio Grande is easily up there among Ford’s best films, even if the open air cinematography makes the picture too strong in chiarascuro. This Eureka print is a very thorough and complete release that includes commentaries by Maureen O’Hara and Stephen Prince, as well as an interview with O’Hara, an appreciation by film writer Leonard Maltin, a limited edition booklet and a consistently superb visual essay by writer Tag Gallagher.