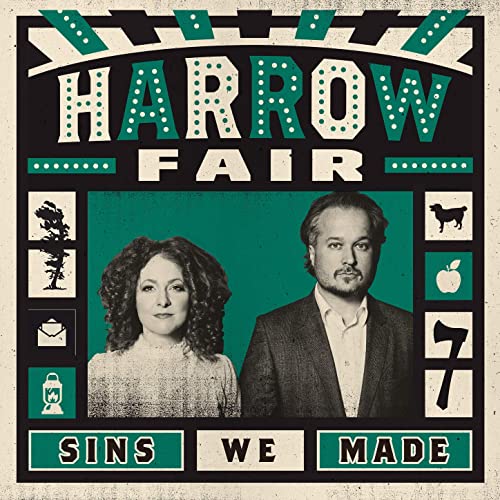 Harrow Fair – Sins We Made

As the UK continues to lock itself away in Covid-19 isolation and so much of normal life has been cancelled, it is a real treat to receive some new music. Sins We Made is the second album from Canadian duo Harrow Fair (Miranda Mulholland and Andrew Penner), and its ten tracks of Americana goodness offer delicious twin vocals and haunting harmonies.

While the vocals are clearly the focus of their music, Harrow Fair exhibit a flair for good songwriting and the ability to write a decent melody too. The music is intense, almost dramatic, and uses change of pace very well, the occasional interlude often coming before an emotional crescendo. Miranda Mulholland’s fiddle weaves through the album, sometimes as gentle accompaniment but also taking the lead in fine style.

The opening track and lead single showcases the duo’s songwriting ability very well. Using an old fashioned counting song format, the track focuses on many major news events from recent times to provide a, sometimes coded, commentary on world events. It’s an intricate and involved song, and repeated listens will give opportunities to identify more of the events described.

There are several other good tracks on the album too. Rules Of Engagement tells of standing up to a bully, a strong song with more guitar than most. Shadow is also powerful, the spectre of addiction described in stark terms. The one instrumental track here is Shiloh, written for the Civil War battlefield in Tennessee, the fiddle leading in a traditional sounding track that sounds like a country take on a marching song.

Dark Gets Close is a lovely acoustic country track that is far more optimistic that the title might suggest. Loved You Enough sees Andrew Penner taking the lead in a track that tells of the strength that can be required to walk away. Seat At The Table calls for communities to come together – definitely apt in the current environment.

Harrow Fair are a new name to me, and I’m hoping that their UK tour will be rearranged once we can all get out to gigs once more. Sins We Made is a good album, the twin vocals playing off each other nicely to serve up a lovely Americana offering.