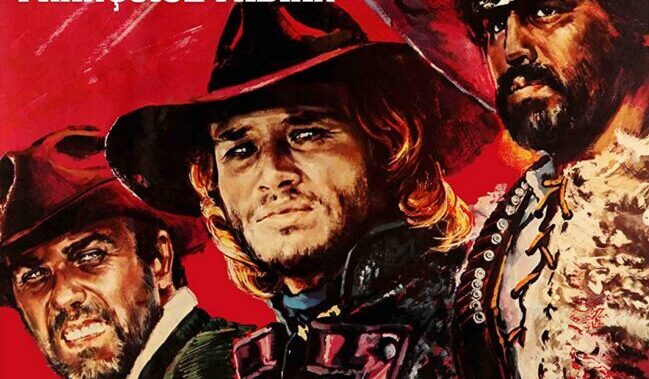 A new release in the Eureka Classics series is an Italian Western, or more derivatively called Spaghetti Westerns, directed by one of the most prolific of Italian Western directors, Sergio Corbucci. Corbucci’s best known film was the popular Django (1966), a film and character who lent at least the name to many titles of Italian Westerns. Corbuccio also made some other key Italian Westerns, 13 in total, including Navajo Joe (an early starring role for Burt Reynolds) and The Great Silence (both 1967). Some of the tropes or references from these films are used in The Specialists and, as Austin Fisher states in an extra on the disc, these were not repetition or necessarily PostModern references, but rather building on tropes from previous films as a model, often both from Corbucci’s own films or even those of Sergio Leone.

The plot of The Specialists departs little from the tropes or characteristics from other Italian Westerns: revenge, a loner (smoking the requiste cigar pressed between his teeth), a town with a dark past, sadistic bandits and corrupt officials. Here the stranger in question is Hud (played by Johnny Hallyday) who returns to the mountain called Blackstone having already rid passing bandits in a violent shoot-out after they had threatened to kill the passengers on a stagecoach in a muddy sequence designed purely to introduce us to the quick draw gunslinger, but also adds to the “Mud and Blood” Western sub-genre that also included Django and The Great Silence. When he arrives back to the town, having left years before after the death of his brother, apparently at the hands of the townfolk, he has come back for his brother’s buried treasure. The naive sherrif (Gastone Moschin) doesn’t allow guns into the town, but it soon becomes apparent to Hud that he most definately needs his gun, despatching a couple of would be assassins. Soon Hud finds himself caught between the townsfolk (including the sherrif) and nearby bandits led by Diablo (Mario Adorf).

As is typical with Italian Westerns, this is an international production, this one a Italian-French-German co-production and as such is presented on this disc in Italian, French and English (I would be recommend viewing in the Italian audio), but filmed in the iconic Italian Dolomites, Cortina d’Ampezzo in the Sud Tyrol rather than the usual Almeria in Spain. This scenery does give an added interesting locale for the film. t no point does the film really make clear where it is set, it mentions Dallas, Texas several times. Texas it certainly ain’t, although nor does it appear to be the more likely north of the country with Mexican bandits present. Regardless, it makes for impressive locations, remiscent more of the Karl May Westerns made in Germany (though they were mostly shot in Croatia, then Yugoslavia).

Though present, music plays less of a role in The Specialists than in most Italian Westerns, though the revenge aspect and characters are very much typical of the genre. Johnny Hallyday who plays the hero is an interesting casting choice. Hallyday, sporting the piercing blue eyes similar to Franco Nero (the original Django and star of many a Corbucci film) is a French actor, but is better known as a singer in France. In France Hallyday was hugely popular. In the early 1960s he was known as a ‘Yé-yé’ (yeah, yeah) singer, making a similar brand of music to The Beatles, a kind of bad boy Cliff Richard. Not a great actor, but he does do a serviceable job in The Specialists and has a look that works well as the loner in an Italian Western with his blue eyed side-eye. He also has the added trope of wearing a chain mail waistcoat that serves him well on more than one occasion in the film. Surprisingly Fisher makes no reference to Hallyday in the interview extra, although filmmaker and Italian Western expert Alex Cox does talk about Hallyday in the film’s commentary.

The finale of the film is really quite special. Even after the massacre in the showdown between Diablo and Hud, in which both men are badly wounded, Hud has to face off the four hippy kids he saved at the beginning who want to be just like him. They take the guns of the dead bandits and order the townsfolk to strip. They are all seen lying on the floor naked, crawling on their bellies. This surreal scene is more like something from Pasolini’s Salò: 120 Days of Sodom than any other Western and face off Hud, again in a confrontation not dissimilar to the one in Django with its almost supernatural element.

This release by Eureka Entertainment also includes an extensive booklet, a downloadable script in English and French and Italian trailers as well as the commentary by Cox and interview with Fisher, author of ‘Radical Frontiers in the Spaghetti Western: Politics, Violence and Popular Italian Cinema’.