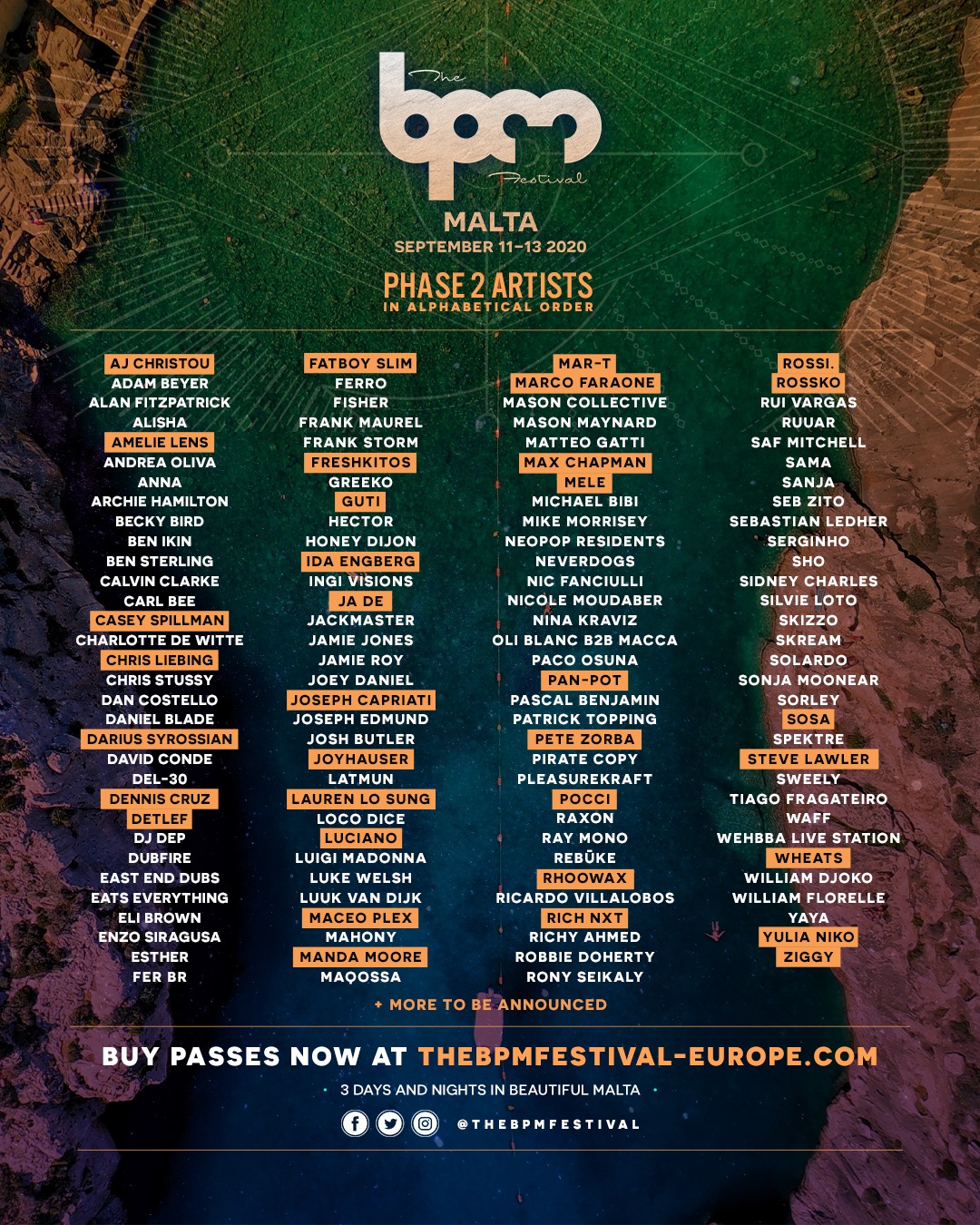 Firmly cementing itself as the premier destination for house and techno heads this summer, The BPM Festival: Malta is taking things up to a whole new level with a range of new favourites announced today – heading to stunning Maltese shores this September.

Boasting a who’s who of eclectic electronica to a true gem of the Mediterranean party scene, even more flavour has been added to proceedings with the likes of the iconic Fatboy Slim alongside Amelie Lens, Darius Syrossian, Ida Engberg, Joseph Capriati, Lauren Lo Sung, Luciano, Maceo Plex, Max Chapman, Mele, Pan-Pot, Steve Lawler, and more joining a weekend already rich with a lineup unrivalled across the globe.

Nobody could be as suited to bringing the summer party the world has been waiting for quite like BPM. The global festival titan has for over a decade brought the biggest and boldest festival experiences to the world, from Costa Rica and New York City to Brazil and Portugal amongst many other destinations, with a powerhouse lineup of the biggest names in house and techno filling their stages over and over again.

From sunrise to sunset, expect standout daytime programming held under Malta’s unmissable sunshine skies (with over 300 days of sunshine witnessed each and every year on the island). As night falls, expect the greatest names in house and techno serving up sets that’ll live long in the memory – surrounded by a global community that’s been waiting for this very moment for landmark summer highlights. With jaw-dropping sunshine and a whole island of spectacular views and chilled holiday vibes to soak in, The BPM Festival: Malta is the perfect gateway for that long-awaited holiday retreat.

All set to be hosted at Malta’s leading open-air club Uno Malta, expect 3 amazing stages hidden amongst trees and stunning backdrops – with wide-open spaces, unrivalled soundsystems and a venue unlike any other, there couldn’t be a better home for The BPM Festival’s first visit to Malta, and the perfect place to throw away those rusty party shapes.

With the surroundings of Malta now awaiting The BPM Festival to its shores, along with a famed array of label showcases and party sponsors yet to be announced, you’re guaranteed a summer party like no other.

With very low rates of Covid-19 and incredibly detailed and diligent planning from the Maltese government, the country is now open again for tourism to many parts of Europe including the UK from July 15th. All hotels, bars, restaurants, clubs and beaches are open with stringent procedures in place around social distancing and testing.

Full weekend tickets for The BPM Festival: Malta are on sale from now, starting from €169 with special VIP packages available from https://thebpmfestival-europe.com/