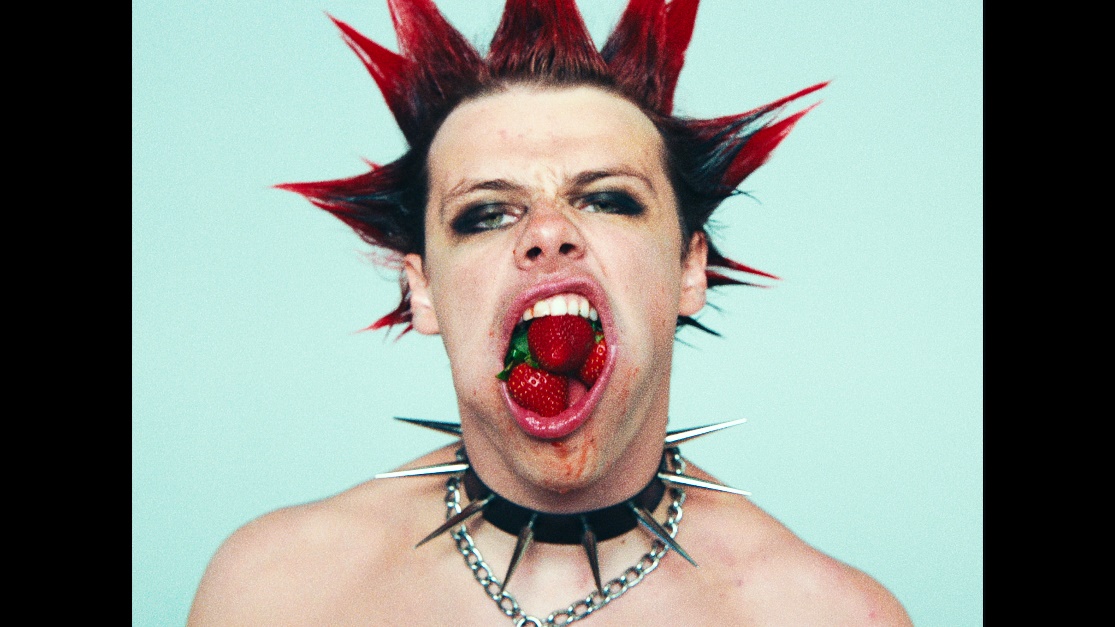 Directed by Christian Breslauer (Roddy Ricch, Tory Lanez, Marshmello) the “Strawberry Lipstick” video stars YUNGBLUD, his band, and L.A.-based singer/songwriter Jesse Jo Stark. With a whirlwind intensity true to YUNGBLUD’s chaotic charisma, the visual places him in a series of outlandish scenarios: mixing it up in a boxing ring, dancing in a custom Union Jack dress, lounging in a bathtub full of strawberries alongside Stark. A perfect foil to YUNGBLUD, Stark is a captivating presence.

Endlessly creative, YUNGBLUD also recently announced the upcoming release of his new graphic novel, The Twisted Tales of the Ritalin Club Volume 2: Weird Times at Quarry Banks University. The follow-up to The Twisted Tales of the Ritalin Club (his 2019 debut as a graphic novelist), the comic follows YUNGBLUD and his super-powered friends as they navigate university life and all its drugs, sex, and relationship drama — ultimately finding themselves caught in a trip that may cost them their lives. Due out via Z2 Comics this November, Weird Times at Quarry Banks University is now available for preorder in multiple editions. Go HERE for more info.

Born in Yorkshire, England, YUNGBLUD (aka Dominic Harrison) is a multi-instrumentalist who first picked up a guitar at age two and began writing his own songs at age 10. The 22-year-old artist is known for voicing what he feels are major concerns for his generation, using his music to unite and empower the youth of today. After breaking onto the scene with his self-titled EP, YUNGBLUD made his full-length debut with 21st Century Liability — a 2018 release that channeled his outrage about the state of the world into confrontational yet catchy songs steeped in punk fury and pop melodicism. The following year, YUNGBLUD released Live In Atlanta and the hope for the underrated youth EP, which debuted in the top 10 on the UK Official Albums chart. Over the years, YUNGBLUD has performed to sold-out crowds in over 20 countries and played some of the world’s biggest festivals, including Austin City Limits, Life Is Beautiful, Lollapalooza, Reading and Leeds Festivals, and Vans Warped Tour.