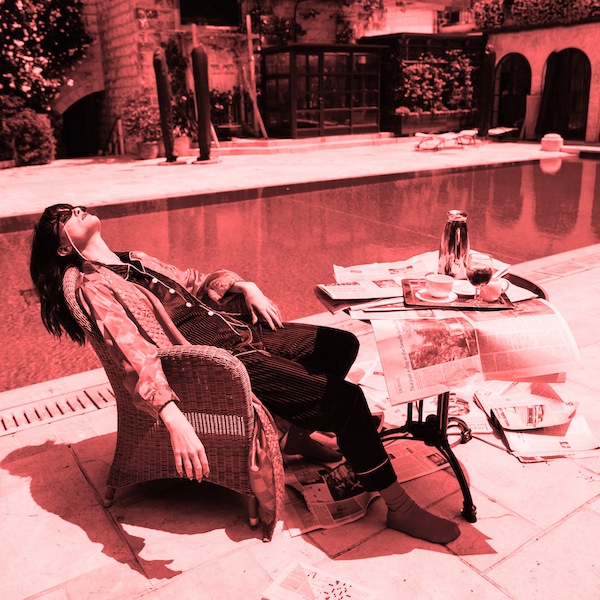 Tel-Aviv based artist Noga Erez has shared an alternative version of her recent single “NO news on TV,” the second single to be shared from her forthcoming second album (details to be announced).

The stripped-back, reimagined live version continues the “Kids Against The Machine” series, following a similarly styled reworking of previous single, “VIEWS“. “The idea was not to use any ‘machines’. No computer, no electronic instruments” Erez explains.

However, creating Vol.2 of the Kids Against The Machine series wasn’t quite as straight-forward as expected! She continues: “We filmed the sessions in February when everything was planned out. And then, you know, I don’t have to tell you what happened in March. While in quarantine we wrote “NO news on TV” and decided to release it and push all the other singles to later. So, our ‘Kids Against The Machine’ version had to be produced under the new circumstances, with new limitations.

We were able to gather musicians who were able to learn it really quickly and without rehearsing in a group. We found a great location but when we arrived at the location the morning of the shoot, we walked in to find closed doors and a location owner that had changed their mind. Ori [Rousso – Erez’ collaborative partner], myself, a group of 10 musicians and filming crew all took the crazy amount of equipment to the apartment of a person who lives in that building. So, these musicians aren’t just a bunch of people who came to play the gig and do their thing – they each saved our life that day! So, No news on TV live from the KATM sessions was not at all we expected it to be, and we love it so much!”

“NO news on TV“ is an up-beat bop that Erez and her partner Ori Rousso wrote during the COVID-19 pandemic while producing and writing their highly anticipated second LP. The track is seamlessly guided by Noga and Ori’s sleek production and provides a warning against apathy and giving into paralysis and fear, particularly now when there is so much to care about. The song’s music video, which is also out now, is a lesson in what happens when we seek apathy’s illusion of peace of mind.

Speaking on the song, Erez comments: “This song was written during a period where I had more time than I’ve had in a decade. I was able to sit down and work my ass off on new music without any emails disturbing the silence. No notifications, nothing. I wanted to write a song that talked about that. I felt a deep need to imagine what it would be like to live in a world with no politics, money, grit, racism or violence I call this song ‘A children’s song for adults’ because it shows a naive, utopian reflection of reality. I just needed to have a song like that. An escape song. But what was an escape song to me a few months back became an absurd, self criticism provoking song to me. It now sounds to me more like a frantic search to close myself off and separate myself from the real world. This isn’t time for escaping, it’s a time for confronting. And I am happy that this song was able to transform into a new form of actually giving a true, honest and criticising perspective on the need for apathy and escapism.

My pure daydream fantasy became an eye opener. Singing about how ‘everybody’s free’ right now is such an incredible dissonance for me. It says exactly what it needs to say: not everyone is free. Actually most of us aren’t, but some of us are literally, physically not free. And that has to change fast.”

Noga Erez burst onto the scene with ‘Off The Radar’ in 2017, winning acclaim across the globe. While the music she makes in collaboration with her partner and co-writer, composer and producer Ori Rousso, exploits many of the more physical, dynamic elements of electronic & pop music, it also embraces a cerebral sensitivity that’s made her one of her home city’s most exciting, idiosyncratic artists. The grainy textures and potent atmospheres forged with her synths and ingenious beats bravely straddle genres. Her 2018 standalone singles “Bad Habits“ and “Cash Out (feat. SAMMUS),” and 2019 collaboration with ECHO, “Chin Chin” saw her continuing to forge a path of uncompromising and unpredictable, gritty, truth-seeking alt-pop. Most recent single “VIEWS” marked the start of the next chapter in her career, with a new full-length in the pipeline. Watch this space!