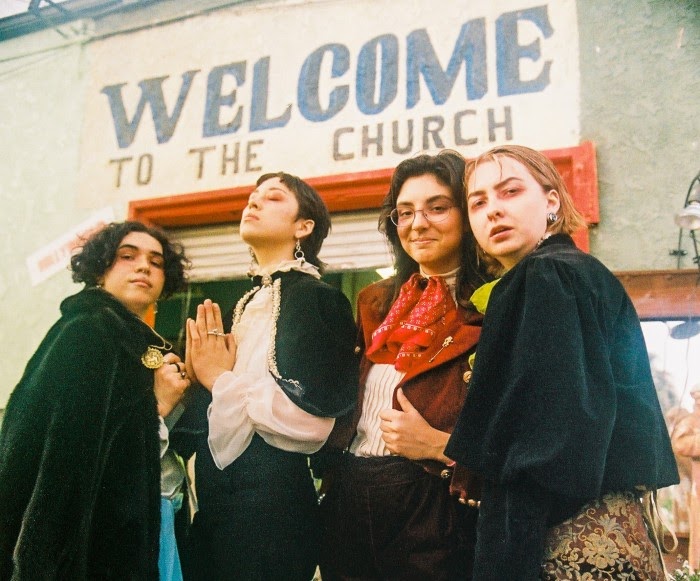 “The song reflects an unquenching will to survive. The correlation between caring for our plants and caring for our body/soul is close. We water them, change their soil, put on Plantasia for them, and give them a little nutrients. But sometimes we water them too much. Or we ignore them for weeks. Sometimes we become the thing that destroys us. We are made aware of all the ways in which we are the one causing our own roots to spoil, that we are our own oppressor. We’re made aware that the thing we are supposed to trust deeply has betrayed us.

In a greater context, it is reflective of the systems that we uphold by being blind to them. In being blind or complacent, we unknowingly ourselves cause harm both invisibly and externally. We have to have an unmistakable commitment to caring for the health of our souls and the souls of others. Sometimes you just gotta get a can of weed-killer to your own face and call it a day!”

Of the video, Larkin says, “All around the world, indoor plants are getting more care and attention than ever before – and for some they might be their only companions in this time. Unfortunately for Girl Friday singer/guitarist Vera, I gave her plant dark intentions and an unflinching desire to ROCK. I wanted to bring some lightness to the song which has themes of isolation, illness and longing. The challenge of including all four band members (who are each in different places all over the world) turned out to fit the concept really well, and in a way they’re united through their interactions with the plants. Director of photography Ezra Simons and I made the video entirely in our small studio above a record store in Auckland. This was our first time working with stop motion animation, and it involved a lot of experimentation, astroturf and plenty of green paint. I was lucky to have Annabel Kean and Callum Devlin (Sports Team) on board, who have made some great videos for The Beths among many others.”

Pre-orders for ‘Androgynous Mary’ on translucent purple vinyl are available now. In the UK, exclusive LP versions of the record will be available on pink marbled vinyl with an obi strip and autographed photos of the band at select retailers via Dink’d.

Burning deep in Girl Friday’s music is an unquenchable will to survive. The LA-based band don’t blunt the impact of the themes they work through in their ferocious, knotty rock songs, but they don’t let the more harrowing aspects of being alive and young in the 21st century daunt them, either. Taking full advantage of the dystopian shades of post-punk and noise rock palettes on their arresting debut LP, ‘Androgynous Mary’, Girl Friday nevertheless suffuse their music with abundant optimism. The world is a hellscape, but the four of them are in it together.

The seeds of the band were first planted when guitarist Vera Ellen walked into a friend’s house at UCLA and saw Libby Hsieh playing bass on the couch. Drawn by her unique playing style, Ellen introduced herself, and the two musicians immediately bonded. After a year of playing together, they decided to grow their collaboration into a full band. Drummer Virginia Pettis and guitarist Sierra Scott caught wind of the project from friends of friends and quickly jumped on board. The fledgeling group’s chemistry was undeniable; writing and playing together felt generative and thrilling.

With bold, dramatic guitar lines and tightly wound vocal harmonies, Girl Friday negotiate the stress and alienation that comes with being sidelined from normative society on ‘Androgynous Mary’.  “Does the average man feel like he’s on the outside?” goes the beginning of “Public Bodies,” a wistful jangle-pop gem that shudders open into a snarling punk coda. Taking cues from longtime boundary-pushers Sonic Youth, Girl Friday depart from traditional song structures, favouring the rush of jarring turns over the safety of well-defined pop taxonomy. Looking to queer provocateurs like Placebo, they cherish the frisson of incongruous musical elements soldered together: “really dark, heavy things mashed up with quite beautiful things, whether that be a distorted guitar line and a sentimental vocal or vice versa,” as Ellen puts it.

That duality dovetails with the thematic friction running through the album, the alternating despair and hope that intertwine in the fight to stay alive as any kind of unfairly disenfranchised person in the US. Written during a year of personal struggle for all four band members, ‘Androgynous Mary’ reflects the solace they took in each other — as a band, but also as a micro-community and a chosen family. “It feels so rejuvenating to be there for each other and protect each other,” says Hsieh. Ellen adds, “We’ve definitely been through a lot together, but we’ve come through it by sticking together and loving each other regardless.”

On the record’s final song, “I Hope Jason Is Happy,” Girl Friday sing in unison against a resolute drumbeat: “My head is on your chest / In the end I’ll be happy if you do your best / You’ve got to fight to keep your breath in this world.” It’s a testament to the power of their bond and a gesture of solidarity with all those listening. Alone, we suffer under the weight of everything designed to keep us down. Together, we stand a fighting chance. Girl Friday place their hope squarely on that chance — on what we can do when we show up for each other, where we can go when we’ve got each other’s backs.

‘Androgynous Mary’ will be released on August 21st via Hardly Art. Pre-order here:https://smarturl.it/GirlFriday_AM