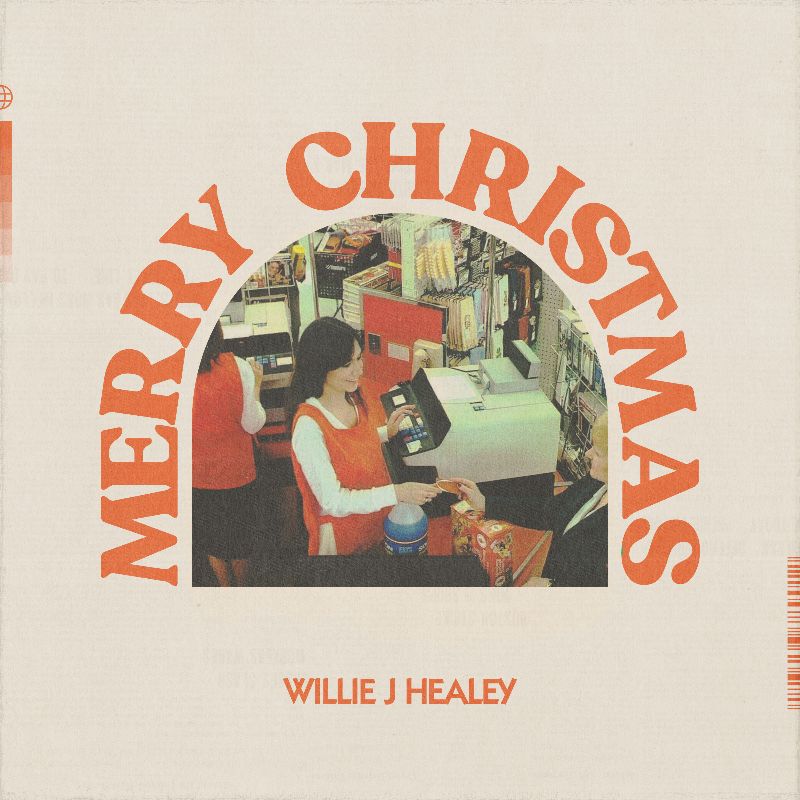 Today Willie J Healey announces his upcoming 7″ Merry Christmas alongside a new video. Healey once again demonstrates his skill with melody with this festive offering – full of warmth, positivity and his now trademark lyrical charm. Merry Christmas – like previous single Fashun –  is the result of sessions Willie undertook in New York with Loren Humphrey. Fittingly, the video was also shot in New York, the backdrop to so many magical Christmas memories. The single follows Heavy Traffic which ran on the A-List at BBC 6Music and caps a breakout year for the Bristol based songwriter. As part of the limited 7″ run, each slipcase will be will adorned with a unique/one-off design from Willie.

Willie says of the single “I’ve always loved Christmas. I wanted to write a song for all of the hard working parents out there, working tirelessly to provide without glory or merit.”

Willie J Healey’s new album ‘Twin Heavy‘ has been met with a groundswell of critical acclaim. Positive reviews – praising not only his musical talent but his likeability and charm – on top of four consecutive BBC 6Music playlists, continued support from BBC Radio 1 (Greg James in particular), sold out dates and huge DSP support including New Music Friday have put Willie J Healey at the forefront of modern British guitar music.

There’s no-one quite like Willie J Healey. The sonic auteur is emerging as his generation’s answer to songwriting icons Joe Jackson, Elvis Costello and Roddy Frame, with a similar flair for matching eloquent, literate and sharp-witted lyrics with a melodic streak that touches upon all of the great decades in pop history.

A future cult classic, ‘Twin Heavy’ is the product of Willie J Healey’s almost obsessive creative nature. By day or by night he’ll most likely be found writing, recording or just jamming in his garage studio, and at any given time he’ll have a couple of dozen songs in development. Surprisingly, music is the second all-or-nothing, double-or-quits passion of his life. He’d been equally dedicated to a previous career as an amateur boxing champion, and while that’s long since over, you’d still be foolish to challenge him to a quick couple of rounds for old times’ sake.

Between his music and his force of personality – sometimes intense, other times jovial but consistently warm and accommodating – he’s a youthful local eccentric in Carterton, a small town adjacent to an RAF base. That was all the more striking when producer Loren Humphrey (The Last Shadow Puppets, Florence + The Machine, Tame Impala) stayed with him as they prepared to work on ‘Twin Heavy’. A pale-skinned, red-headed Englishman and a towering American who looks like one of The Eagles placed in a contemporary style mag: not a combination you see in near rural Oxfordshire all that often.

Healey and Humphrey headed to Eastbourne, where they recorded ‘Twin Heavy’ and last year’s ‘Hello Good Morning’ EP in just nine days. Recording to tape certainly isn’t too common these days, but as the album proves, it added to its loose, easy-going vibe and is perfectly fitting for Willie’s esoteric nature.

‘Twin Heavy’ isavailable as a visually striking and highly collectible ‘Paint-Your-Own Willie’ edition. Limited to 500 copies, it features a paintable hand-cast 3D model of Willie which rotates on the turntable spindle, alongside a grass green vinyl record. The format is released in conjunction with limited run vinyl specialist Blood Records and is available here.

Other buy-now options include a limited edition cassette and bundles which feature an exclusive merch design.