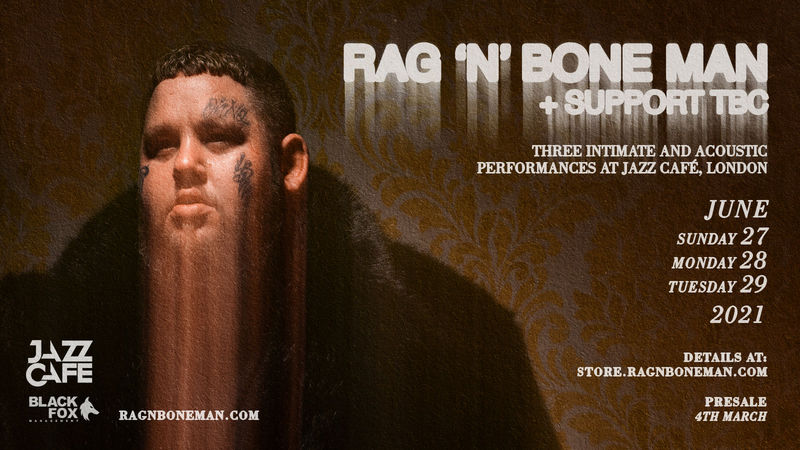 Following on from the announcement of his long-awaited second album ‘Life By Misadventure’, his first full-length since the ground-breaking and award-winning 2017 debut ‘Human’, and the record’s lead single ‘All You Ever Wanted’ climbing to #2 on the UK Airplay Charts, Rag’n’Bone Man has now announced a series of live and intimate performances at London’s Jazz Cafe in June, along with two TV showcases on Later… with Jools Holland tonight (Friday, Feb 26th) and Ant & Dec’s Saturday Night Takeaway the following day.

The three acoustic performances will take place on June 27th, 28th, and 29th, with tickets available for pre-sale from March 4th. Fans who pre-order any album format from the Official Store by March 3rd at 3PM GMT will receive exclusive access to tickets. Find out more at store.ragnboneman.com

The initial reception to Rag’n’Bone Man’s return has been a resounding triumph, being selected as Greg James’ and Arielle Free’s ‘Record of the Week’ on BBC Radio 1 as well as Jo Whileys on BBC Radio 2. The single has been added straight to the A list at Radio 2, to the Radio 1 B list, not to mention being added straight to the A-list at Absolute, Absolute 20s, Virgin and Radio X as well.

If that’s a hard act to follow, Rag’n’Bone Man tore up the rulebook and went to Nashville to write and record what would become ‘Life By Misadventure’, returning to the UK just before the pandemic first erupted. While a dose of heavy blues and soul lives within some of these new tunes, the majority of this new album finds Rag’n’Bone Man taking a huge step forward as an artist, a songwriter, and a singer capable of showcasing tremendous warmth and real emotion with every breath.

The bulk of the album was produced and recorded by Grammy Award-winning producer and multi-instrumentalist Mike Elizondo (Eminem, 50 Cent, Fiona Apple, Alanis Morissette) at his studio just outside Nashville.
‘Life By Misadventure’ is the perfect tonic for these times. An album of depth and soul, about growing up and moving forward. Enjoy the trip.