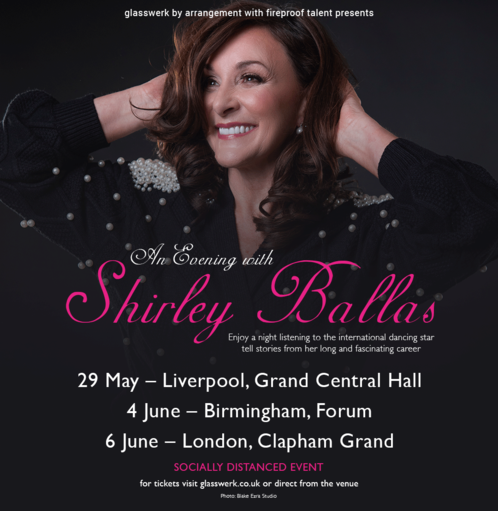 An Evening With Shirley Ballas

Shirley Ballas has had a long and eventful career of highs and lows as a champion ballroom dancer, teacher, and now as head judge on the BBC’s flagship show Strictly Comes Dancing.

This is an evening not to miss for fans of Strictly and keen ballroom dancers alike, as Shirley talks about stories from her career, gossip from behind the scenes, and gives the audience a chance to ask their own questions to Shirley.

No doubt there will be some old friends and colleagues in the audience too! And, with a hall full of dancers and dance lovers, hopefully we may even see a couple of demonstration moves from the champion herself.

Ticket prices vary per venue and per seat selection. Audiences are urged to not delay so as to avoid disappointment when these shows sell out.

Originally from Wallasey, Shirley has been dancing since the age of seven. She is three-time British Open to the World Latin American champion, ten-time United States Latin American champion, and multiple-time British National champion. By 21, Shirley had won nearly every major title she competed in worldwide. She is the only person to have ever won the British Open to the World Latin American Championships in Blackpool with two different partners, and reached the finals an impressive 17 times. She still remains the youngest ever female to reach the British Open to the World Dance Championship finals. Shirley has been the recipient of three Carl Alan Awards (the Oscars of the world of dance), Teacher of the Year Award and has been inducted into both the United States and Great Britain Dance Hall of Fame.

In addition to her role on Strictly, Shirley has been seen giving masterclasses and commentating on the American series Dancing with the Stars, is a frequent panelist on Loose Women, and was the subject of BBC1’s Who Do You Think You Are? She presented two series of the popular This Morning featureMatchmaker Mountain for ITV and fronted the CBBC series Our School Summer Camp. Shirley’s numerous other appearances include The Jonathan Ross Show, Britain’s Got More Talent, Through the Keyhole, Family Fortunes, Crystal Maze, Catchphrase, The One Show, Tipping Point: Lucky Stars, The Graham Norton Show and Celebrity Juice, amongst others. Further to this, Shirley was asked to lend her voice to the Puss in Boots story for the CBeebies channel in collaboration with Northern Ballet, and presented a Friday Night Is Music Night special for BBC Radio 2.

In 2019, Shirley was one of nine celebrities selected for BBC1’s Kilimanjaro: The Return, where they climbed the 5,895 metre mountain to raise funds for Comic Relief supported projects in the UK and internationally.

Whilst Shirley continues in her role as head judge on the biggest show on British television, she has also recently fronted her own podcast, co-hosted BBC1’sMorning Live, presented on BBC Radio 2, appeared on Celebrity Sewing Bee, and released her sensational autobiography Behind the Sequins.