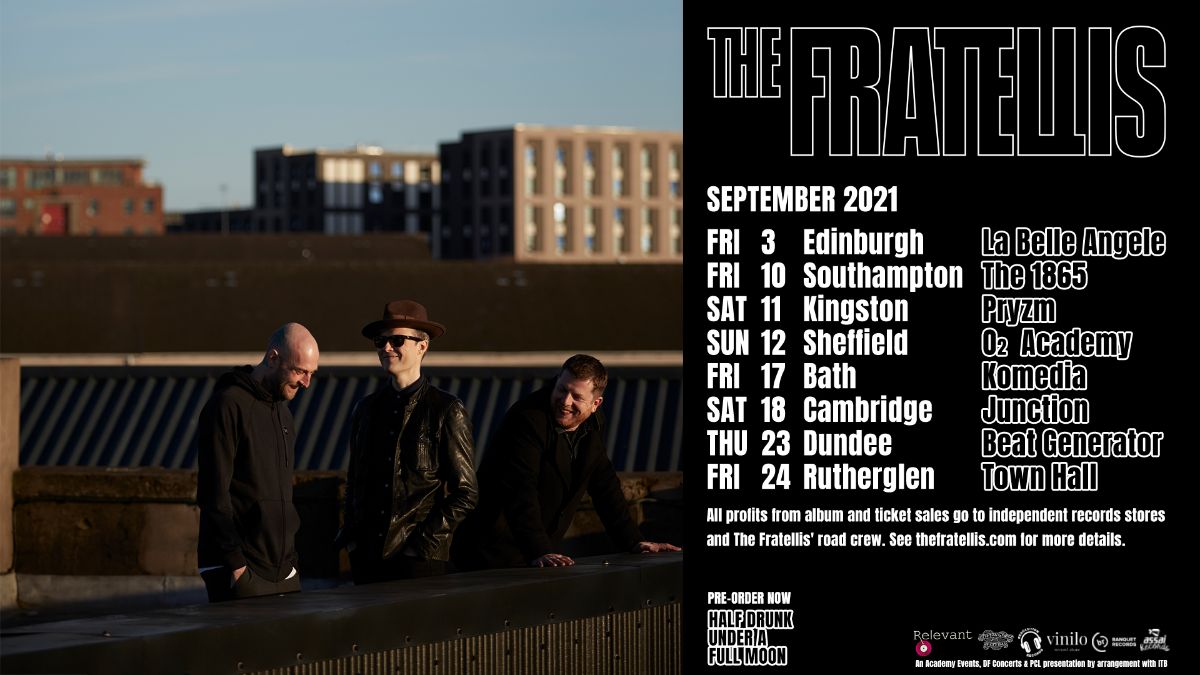 The Fratellis have announced a September UK tour, taking in smaller regional venues ahead of the band’s previously announced major UK tour, rescheduled to Spring 2022. All profits from the September tour will go to independent record stores and The Fratellis’ road crew. Tickets for the tour will be available exclusively through independent record stores to April 8 or until sold out.

“We’re playing eight small venues around the country and are selling tickets through local record stores,” comments Jon Fratelli, the bands singer and songwriter. “It’s partly to just go out and play, it’s partly an exercise to go out and help local record stores. Any profit will go to those stores, and to our fantastic road crew. Some of our crew have been with us for 15 years, we’re trying to do something to help both sides. This feels like the perfect arrangement.”

The Fratellis new single ‘Need A Little Love’  is currently on BBC Radio 2’s Playlist, and the band’s forthcoming sixth album ‘Half Drunk Under A Full Moon’ – out tomorrow Friday April 2 on Cooking Vinyl – will be Radio 2’s Album Of The Week next week. The Glasgow trio have been confirmed to perform on The Late Late Show with James Corden, broadcast in the UK on April 6 on Sky Comedy.

Following the UK Top 5 success of 2018’s critically-lauded ‘In Your Own Sweet Time’, which contained the Radio 2 playlisted single ‘Starcrossed Losers’, The Fratellis began work on its audacious follow-up in buoyant form. Recorded in LA with producer and long-time collaborator Tony Hoffer (Beck, Phoenix, Supergrass), ‘Half Drunk Under A Full Moon’ is a treasure trove of excess that shouts from the rooftops and radiates joy. “On the last record we broadened our sound by trying out new ideas,” says Jon. “With this album, the plan was to push those ideas even further.”

The Fratellis were gearing up to release ‘Half Drunk Under A Full Moon’ when the pandemic put paid to their plans. Lead single ‘Six Days In June’ hit the airwaves, revealing the trio’s jubilant new direction, just weeks before the world shut down. “We had a whole year’s worth of work that didn’t happen, but we knew it would come back around,” says Jon Fratelli, the band’s singer and songwriter. “As a band who have a loyal audience we know we’re in a fortunate position.”

As the return of live music creeps closer, The Fratellis are primed to prove the power of pop to lift spirits and kickstart celebrations. “People are desperate to go back to gigs,” says Jon. “By pure chance, we’ve made an album that could really suit that mood of joy and release.”

The Fratellis formed in Glasgow in 2005 and comprise of lead vocalist/guitarist Jon with bassist/backing vocalist Barry Fratelli, and drummer/backing vocalist Mince Fratelli. Their 2006 debut album ‘Costello Music’ – which contained the globe-conquering hit “Chelsea Dagger” – quickly went double-platinum and led to The Fratellis winning the Brit Award for British Breakthrough Act in 2007. A successful second album ‘Here We Stand’ followed in 2008, but this whirlwind of success came at a cost, and by the end of the decade the trio had split, burnt out from their relentless life on the road.

Since reforming in 2012, The Fratellis have gone from strength to strength, winning over a new generation of fans and enjoying a more sustainable type of success. ‘Half Drunk Under A Full Moon’ finds The Fratellis at ease with who they are and where they are: a band who have not only survived but thrived, and are making the best, most confident, most ambitious music of their career.