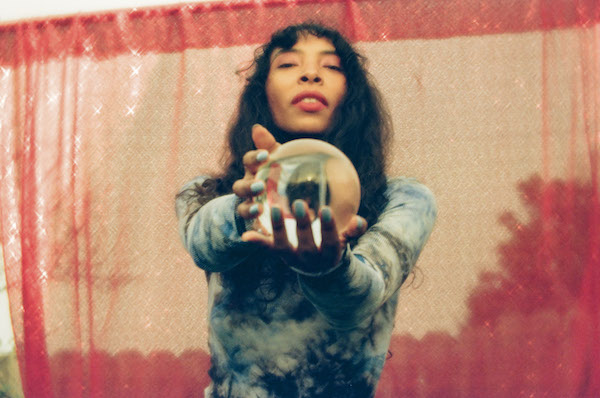 ‘The Turning Wheel’ is the follow-up to 2019’s ‘Mazy Fly’, and revolves around themes of human unity, the future, divine love and the enigmatic ups and downs of being a part of this carnival called life. SPELLLING took on the ambitious task of orchestrating and self-producing an album that features an ensemble of 31 collaborating musicians. The resulting album incorporates a vast range of rich acoustic sounds that casts her work into vibrant new dimensions.

‘The Turning Wheel’ is split into two halves — “Above” and “Below.” Lush string quartet shimmer combines with haunting banjo and wandering bassoon leads, as the album progresses from the more jubilant, warm, and dreamy mood of the “Above” tracks to the more chilling and gothic tone of the “Below” tracks. This progression is anchored by SPELLLING’s vocal style that emphasizes the theatrical and folkloric heart of her songwriting.

“Above” is opened by lead single, “Little Deer,“ which surges with piano, her bewitching voice, and 17 different acoustic instruments. Throughout, warping synthesizer adds a whimsical edge. It was inspired by Frida Kahlo’s painting ‘Wounded Deer’, in which she depicts herself as an animal and human hybrid.

“‘Little Deer’ is definitely a thesis track,” explains SPELLLING. “I feel that way because it not only showcases the greatest range of instrumentation that is featured on the album, but also because it accomplishes this strong impression of theater that I was striving for with the album as a whole. I’m especially proud of the lyrics. The challenge with the lyric writing was being able to speak to really large concepts like karma, reincarnation and the cycle of life without making the song sound burdened. I wanted the lyrics to match the grandeur of the instrumentation but still be easy to sing along to. I figured out a way to build the lyrics using a lot of abstract language that is still singable but odd in a way that I hope makes it memorable.”

‘The Turning Wheel’ had an original release date of September 2020, but the forced pause ended up serving as a blessing in disguise. Navigating the chaos of recording and producing the remaining instrumentalists – either remotely or through rigid socially distanced studio sessions – was immensely difficult, however the delays ultimately opened up the opportunity for SPELLLING to dedicate more attention to her lyrics. ‘The Turning Wheel’ demonstrates a distinct evolution of lyrical style, from the more incantatory and abbreviated approach of her previous work to a more expansive, narrative production.

A manifestation of this considerable effort, time, and collaborative energy, ‘The Turning Wheel’ will surely become a classic for its elegance. And while the artist’s eclectic influences, from soul to psych to pop to noise, remain present, something entirely new has also been born in the cosmic soup of this massive undertaking: a grand and genre-less adventure. One that allows the artist’s authenticity to shine and also marks her as a conduit for something with a magic of its own.

‘The Turning Wheel’ will be released on June 25thvia Sacred Bones. Pre-order links can be found here.