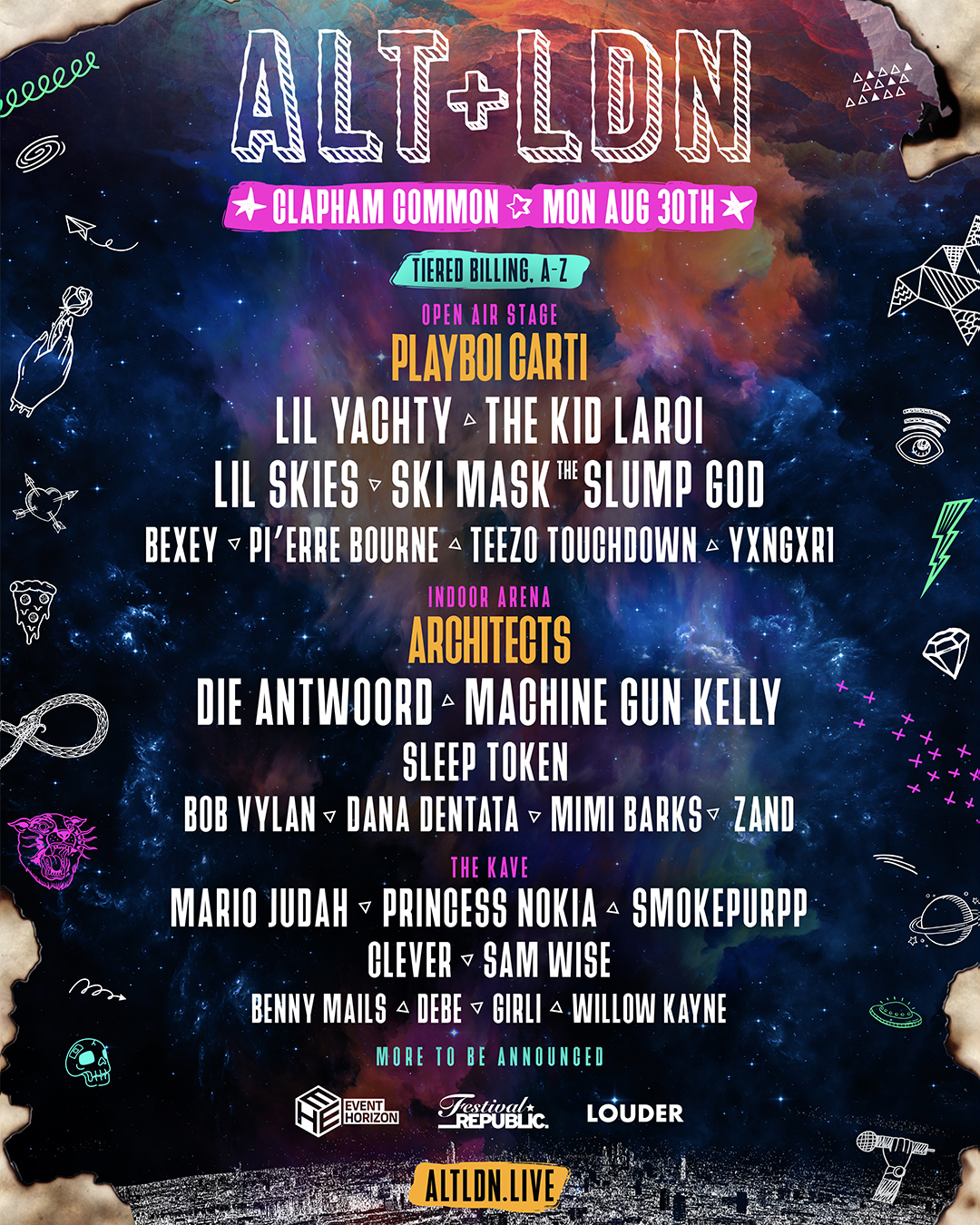 Capturing a moment in modern breakthrough culture like nobody else can, a first-of-its-kind festival experience is set to touchdown in the heart of London this August – with ALT+LDN delivering a cross-culture blend of an alternative world that is truly taking over the planet.

Forged from the inescapable world of hip-hop and alternative culture that has come to lead the way over the past 12 months, ALT+LDN is a celebration of a fire new subculture no longer defined by genre boundaries or backgrounds. It’s about kicking against the norm, ripping apart the rulebook and celebrating individuality – with the raddest names in the game touching down for a Bank Holiday Monday you’ve never seen before.

Leading the way is a melting pot of some of the biggest artists on the planet. One of the hottest rappers in the game right now, Playboi Carti will head to ALT+LDN this year, fresh from the scorching success of recent album ‘Whole Lotta Red’. Truly experimental in his uncompromising style, his live show is bound to go off – with Clapham Common the only place to be to catch this phenomenon in action. Single-handedly redefining the alternative landscape with last year’s ‘Tickets To My Downfall’, Machine Gun Kelly comes to London this August with his status as one of modern culture’s most influential and undeniable voices of a generation. Taking over charts, award shows and every facet of youth culture right now – his punchy world of punk-rock is a must-see in 2021 and beyond, as a titan of music sets a fuse that’ll have ALT+LDN popping this August.

They’ll be joined by a slew of different artists all thriving with individuality and perfect for the ultimate alternative throwdown this August. Whether it’s the fever of revered favourite Lil Yachty or trailblazing new sensation The Kid Laroi, the world of modern hip-hop is dipped and rooted in the powerful emotions and hits of the alternative scene. Heralded as one of the most important and vital rock bands of this generation, Architects will take to the ALT+LDN stage with their full throttle and uncompromising style bound to be an essential part of the ALT+LDN experience. Poppy, whose emphatic rock voice has crossed-over into the mainstream over the past 12 months, will be serving up a jaw-dropping festival moment – while eclectic worlds of Ski Mask The Slump God, Lil Skies, Bexey, Smokepurpp, Mario Judah, Sleep Token, Princess Nokia, Bob Vylan, Benny Mails, Zand, CLEVER and TEEZO TOUCHDOWN all combine to form what ALT+LDN is all about.

A culture. A modern youth revolution. The coming together of influence and importance for a festival like no other – ALT+LDN brings it all together. Whether it’s in hip-hop, rock or the alternative – it’s all about the here and now.

Promising to be an essential date in the diary in the heart of London, ALT+LDN presale signups are open now – the first place to hear on ticket release dates and to gain access to tickets before anyone else.
https://www.altldn.live/

Tickets
Further ticket information and on-sale dates will be available soon, with fans encouraged to sign-up to gain access to pre-sale tickets before anyone else
https://www.altldn.live/