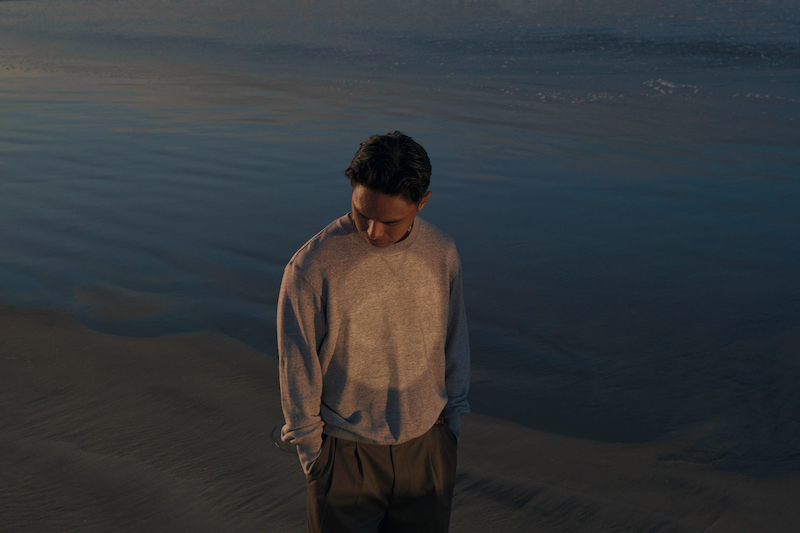 Lionel Boy has just shared the third single from his upcoming, debut, self-titled album, which is due May 14th via Innovative Leisure. The silky smooth “Mango Michelada” is an artfully laid tune ripe for spinning on repeat indefinitely.  It’s easy to get lost in the groovy melancholy Lionel spills on the refrain of the track. “Last February, I moved into a rehearsal space in San Pedro.” Shares Lionel Boy. “The space reeked of febreeze and various chemicals they used to mask the smell of stale cigarettes.  My drummer Jacqueline and I would mess around for hours in that space singing nonsense.  At the time, we were in the habit of drinking Mango Micheladas at every session. On one of those days, we started out cracking jokes and ended up with a song we couldn’t stop working on. COVID-19 hit about a week later and I ended up having to move out of the studio, but we continued to work on this track throughout the pandemic.”

In the case of Lionel Boy, the native Hawaiian sense of the Mahalo spirit is inextricable from the art. And like the word “Mahalo,” there is a deeper meaning to the music beyond superficial translation. Mahalo literally translates to “thank you,” but it’s an entire approach to life: it encompasses the value of thankfulness, appreciation, and gratitude. While those might easily interpret it as indifference and apathy, it is a product of profound connectivity and three-dimensional perspective. Few things are more difficult than making a work of art appear effortless. The airy, jazz-cracked, electronic pop of Lionel Boy belies a wistful romanticism, a careful observational streak, and a meditative fixation on life and death.

A famous John Keats quote holds that you shouldn’t write poems unless the words come naturally as leaves falling from a tree. In a slightly different sense, you can use this notion to trace the trajectory of Lionel’s career. For most of his life, the apostle of chill born Lionel Deguzman was a skater kid. The pursuit taught him the value of individuality — in the sense that there are myriad ways to ride a skateboard and you find your own way by figuring out your own natural style — a singularity that sets you apart from everyone else who can do a backside 180. It’s this attitude with which Lionel approaches music. Even then, this evolution had a streak of serendipity.

In the summer of 2018, Lionel first entered a studio in Long Beach with two close friends (he’d moved to the West Coast port city several years prior). The recording session started by shouting obscenities into the microphone. But inspiration slowly took root and the Lionel Boy vision began to manifest. That same year, Lionel began working with the celebrated producer Jonny Bell on an unrelated project. The strength of the artistic kinship eventually led him to produce the Lionel’s first single, “Are You Happy Yet,” and the Who Is Dovey? EP, released on Innovative Leisure.

Flash forward, a few years later, and the creative union has led to Lionel Boy, an electric synthesis of Lionel’s sounds — which FADER previously hailed as “slacker pop” (alternate ascription: “liquor store pop.”). It’s a warm and mellow album built to keep you company on long drives. If Lionel’s artist DNA stems from a classic singer-songwriter tradition, it’s been subtly transposed with the influences of the rappers, beatmakers, and R&B singers that dominate his listening habits. “Kam Highway” sounds like a breathless moonlit torch ballad laced with a touch of inspiration derived from Boi-1da’s kicks on “Mob Ties.” With “Tides,” Lionel Boy updates Jack Johnson and Ben Harper for a generation in dire need of expansive and endearing mood music. “Mango Michelada” reimagines the synth sounds often used by Frank Ocean to create a song that comes off as refreshing and tropically chill as its namesake.

Despite being recorded during the pandemic, Lionel and Bell somehow managed to create an antidote for the anxiety. They’d visit each other several times a week, slowly fleshing out the demos that Lionel recorded at home, aided by a squadron of highly gifted virtuosos (Fred Garbutt, synthesizers; Bell, Nic Gonzales, Andrew Pham and Sam Wilkes, bass; Brett Kramer, drums; Sarah Hinesly, keys, and Andres Renteria on percussion).  Lionel Boy is soulful and easy-going, both introspective and laissez faire. Extremely mellow but never soft-headed.

For a moment fraught with stress and chaos, this album is a relaxed exhale of joy. Yet it refuses delusion. These are real-life circumstances that play out with thought and concern. After all, there is a subtlety to the art of the vibe. Lionel Boy isn’t just playing a series of chords to  create a serene mood. It’s at the essence of his being. Something that can’t be forced or faked. A timeless cool apart from momentary trends, eternal as the tides rolling in and out.