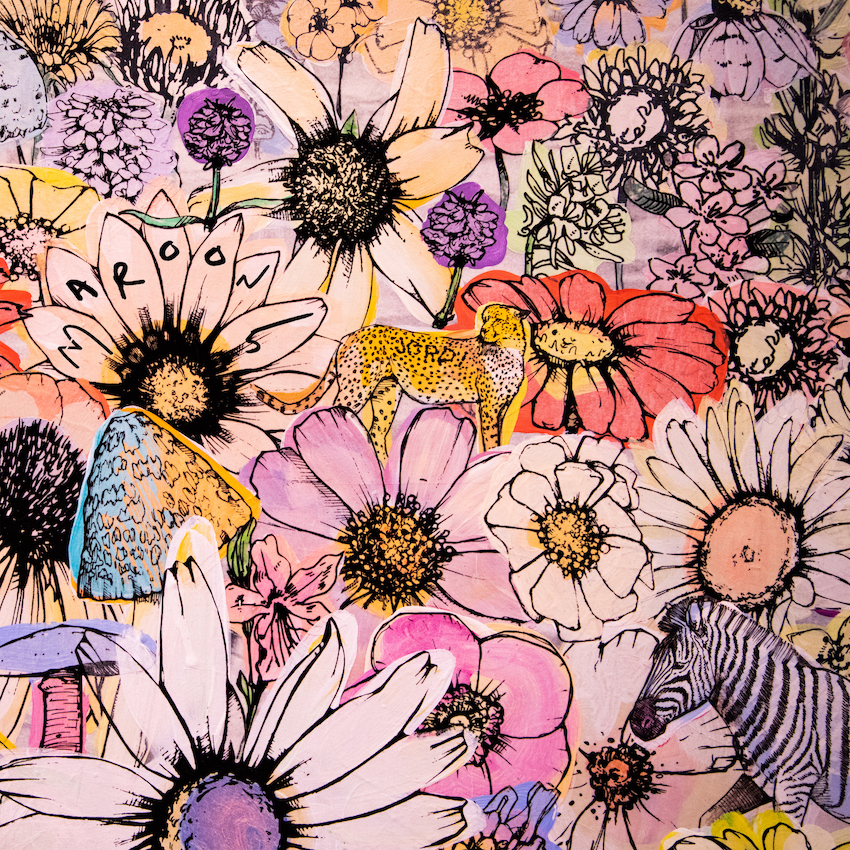 Today, three-time GRAMMY® Award-winning multi-platinum band Maroon 5 unveils the tracklisting and special guests for their latest full-length album, JORDI. The group’s seventh full-length record arrives in stores and at all DSPs on June 11, 2021.

This time around, a bevy of legendary guests and high-profile friends join Maroon 5. The first release off the album, “Beautiful Mistakes” features Megan Thee Stallion. blackbear joins the band on “Echo,” while the Rock & Roll Hall of Famer Stevie Nicks teams up with the group for “Remedy.” Next up, Academy® Award winner H.E.R. guests on “Convince Me Otherwise,” and the late Juice WRLD makes a posthumous appearance on “Can’t Leave You Alone.” The album will also include the band’s triple-platinum “Memories” and a “Memories” remix featuring late legend Nipsey Hussle and superstar rapper YG. Up and coming Zimbabwean artist Bantu is also featured on “One Light.”

The album will be available in Standard and Deluxe configurations. The physical Deluxe will be available exclusively at Target and includes “Button” [feat. Anuel AA, Tainy] and Jason Derulo‘s “Lifestyle” [feat. Adam Levine]. The Target version also boasts a limited-edition cover and poster. All deluxe formats (physical and digital) will also include the original version of “Memories”

Check out the full tracklisting below.

As Maroon 5‘s most personal offering to date, the title nods to the group’s original manager Jordan Feldstein.

Frontman Adam Levine shared the following on Instagram: “I miss him every single day. And I’m proud to have etched his name into the history of this band that he helped build from the ground up…every step of the way. We love you Jordi.”

The band will perform their latest hit single from JORDI on NBC‘s The Voice Tuesday May 25th. The single, “Beautiful Mistakes” ft Megan Thee Stallion, is currently #10 on Top 40 and #2 on Hot AC. They’ve also rejoined with AMEX to release an Encore UNSTAGED Performance with some new material on June 4th. On release day, June 11th, the guys hit the stage at NBC’s TODAY Summer Concert Series for a performance.

Maroon 5 stands out as not only one of pop music’s most enduring artists, but also one of the 21st century’s biggest acts. The band’s new album, JORDI, will be executive produced by J Kash, and in addition to “Beautiful Mistakes” will also include the band’s recent hits “Memories” and “Nobody’s Love.”

To date, the universally renowned Los Angeles band have achieved three GRAMMY® Awards, over 75 million in album sales, 400 million singles worldwide and earned gold and platinum certifications in more than 35 countries. Maroon 5’s last studio album, Red Pill Blues (222/ Interscope) featured the global hit single “Girls Like You,” which reached #1 at Top 40, #1 at Adult Pop, #1 on the Billboard Hot 100 for seven consecutive weeks. The track accumulated over 1.2 Billion Spotify streams and over 3 Billion YouTube/ VEVO views; notably becoming the most-watched video on VEVO in 2018. The band’s last #1 pop single “Memories” has also surpassed 1 Billion Spotify streams and amassed over 725 million YouTube views. Maroon 5 has over 50 million monthly Spotify listeners, and have played over 120 concerts in 30+ countries selling over 6,750,000 tickets worldwide.