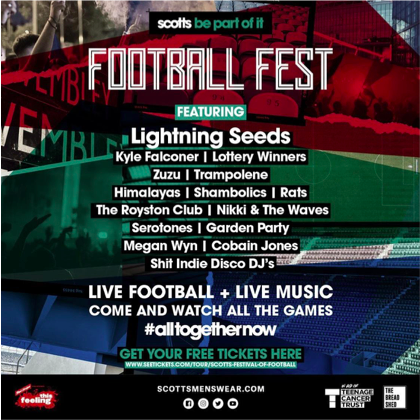 It’s been three years since England’s glorious run at the 2018 World Cup reignited the nation’s passion for international football, but Euro 2020 is now finally on the horizon. And as everyone relishes the chance to be #alltogethernow as the remaining lockdown restrictions look set to be lifted, it’s time for friends and family to be reunited for the singalong, pints-in-the-air revelry of a major tournament.

Leading menswear specialists scotts today unveil details of Football Fest, the ultimate Euro 2020 fan park event, which will be held at The Bread Shed in Manchester from June 12th. Whether you’re a fan of England, Scotland or Wales, Football Fest brings all of the action to the big screen of a venue that’s sure to be bursting with atmosphere.

But why stop there? scotts realised that the only thing that could elevate a football and fashion experience was the unifying power of music. So they teamed up with their friends, the new music champions This Feeling, to further fuel the event with an enviable array of live music – which for many will be their first opportunity to catch a band in action since restrictions started in March 2020.

Live performances from respected names and rising stars will amplify the excitement before each game kicks-off. Before Wales face Turkey as they continue an adventure that they hope will be as unforgettable as Euro 2016, Cardiff’s ascendant raw rock ‘n’ rollers Himalayas will take to the stage. Soon to release his new solo album ‘No Love Songs For Laura’, The View’s resurgent frontman Kyle Falconer will bring the noise ahead of Scotland’s first big tournament game in over 20 years when they play the Czech Republic. And you’ll really know “It’s coming home” when ‘Three Lions’ favourites The Lightning Seeds will keep us dreaming ahead of England’s final group versus the Czech Republic.

It promises to be a football event unlike anything Manchester has seen before. And what’s more, it’s free. Fans can now head here for a chance to gain admittance to a sensational summer event. Everyone in attendance will also be offered the opportunity to make a donation to the event’s chosen charity, the Teenage Cancer Trust.

Football Fest is scotts’ latest project as part of their #alltogethernow campaign. It follows the Artists United Collective, a community of rising music talents, who released an emotionally-charged take on The Farm’s indie classic ‘All Together Now’. All proceeds from the track are being donated to the Music Venue Trust to support their #SaveOurVenues campaign

The full list of games and accompanying artists are listed below. And just maybe the festivities will continue if any of the nations progress throughout the tournament…