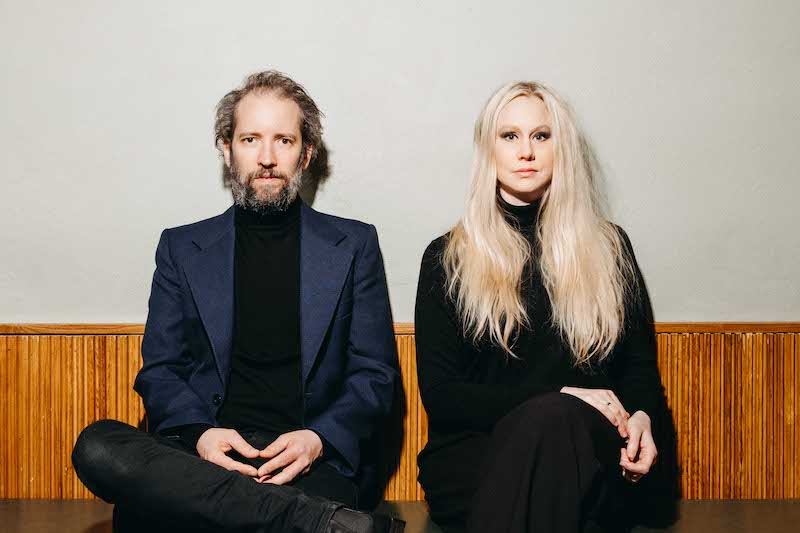 Norwegian artist Susanna is the woman behind Susanna and the Magical Orchestra // Susanna // Susanna Wallumrød, a creator of bold, original and enrapturing music, capable of building worlds to lose yourself in and collaborator with artists such as Jenny Hval and Bonnie ‘Prince’ Billy. Alongside this Susanna has also long been an interpreter of other people’s works, from AC/DC to Dolly Parton, Joy Division to Henry Purcell. Susanna has an ability to transform these works into music that sits comfortably next to her own work while never losing what made the original – and the original composer of the song – so special.

Susanna is now releasing a live album of covers with a unique history. Recorded in Oslo and Asker in 2019 and 2020 right before the pandemic hit, Live by Susanna and David Wallumrød is a collaboration by the Norwegian and her cousin David, also a prolific musician, whose seeds were unknowingly sown over 20 years ago and is set for release August 13th via Susanna’s label SusannaSonata. The first track from the record “For No One”, is streaming online now.

“We played a lot together in our childhood and youth, being cousins, growing up in the same small town Kongsberg,” says Susanna. For a short time she was singing backup vocals in a band David played in as teenagers. In some nice familial details, Hanne Hukkelberg and her sister Eli were also in this band. A couple of years later Susanna and David started to play as a duo, and after a while as a band – but this collaboration never truly saw the light of day beyond a lot of rehearsal together. In 2003 Susanna and David Wallumrød made their one and only duo-concert appearance at Café Mono in Oslo. “After being highly active musicians for many years, we decided to do a concert together in 2017, at a tiny cocktail-bar concert series in Oslo,” explains Susanna “It was so much fun we decided to do some more shows.”

They did, and out of this came Live. The songs on Live are the same covers Susanna and David played together 20 years ago, with a few new additions. They are instantly recognisable classics by Leonard Cohen, Joni Mitchell, Emmylou Harris and Tom Waits, played in the way Susanna and David know best – voice and keys. Pure, and simple.

“We did the selection of songs back then very much based on some of the records I listened to at that time,” begins Susanna, “such as Emmylou Harris’s ‘Wrecking Ball’, The Best of Leonard Cohen from 1975, Joni Mitchell’s Blue and Swordfishtrombones by Tom Waits. Now we both bring songs to the table.”

The record begins with Leonard Cohen’s “Chelsea Hotel #2″, with Susanna’s voice ringing bright and clear against the Rhodes piano keys of cousin David. This isn’t a radical re-imagining of Cohen’s song but Susanna’s aim isn’t to make it her own – it’s to take the sentiment of the track and deliver it in a way that feels authentic and from the heart.

“The work with the songs has been quite natural all along I think. Nothing has been forced in any way due to the arrangements. There hasn’t been a lot of struggling to find the right version, but some tunes have taken longer to get comfortable with singing. And even though the songs and versions we play have been with us for a long time, I think now is the right time to do this material. We have both done a lot of playing and songwri:ng ourselves over the years, and I at least have lower shoulders approaching Joni Mitchell songs, haha. The focus has been with more emphasis on performing together than carve out a new arrangement.”

This point is perhaps the key to Live – Susanna and David are not reinventing the wheel with their covers, there is no obsession with finding an arrangement no-one has heard before. It’s the sound of two people having fun and enjoying what seems more and more like a rare opportunity to play live to a recep+ve crowd. The relaxed approach makes the cover of Joni Mitchell’s “This Flight Tonight”, soar on Susanna’s stunning falseto vocal and the jazzy fluter of keys the lightest feathers alongside, while the duo sound like they’re having such incredible fun interpreting the twisted blues of the Tom Waits tracks “Gin Soaked Boy” and “Underground” (both from Swordfishtrombones) and taking it from bar-room blues to wurlitzer-laden cabaret.

The Emmylou Harris and Beatles songs (the stone-cold classic “Wrecking Ball” and “For No One”, which curiously enough Harris herself has covered) are alternately wandering and sensitive and the record ends with a return to Waits, this time as his most touching on “Johnsburg, Illinois” and Susanna and David ensure that the beating emotional heart remains intact. It’s a perfect closer to an album that thrives on the in+mate: from the instrumentation to the arrangements to the seeng, Live is a warm and welcoming record, like being treated to a show in your living room while the world is in lockdown.

“When I look at it now I see that it reflects my love of albums, and how big of a role these artists, songs and albums made in me discovering new musical territory, and even more important: how to evolve as a singer,” says Susanna. “I guess that’s why playing these songs live with David feels like ‘coming home’; we are having the best time with this music to be honest.”

David Wallumrød is one of Norway’s most used piano/keyboard-players, he has participated on over 150 albums and been a regular member in the bands of artists like Bjørn Eidsvåg, Odd Nordstoga, Jonas Alaska, Band of Gold and Torun Eriksen. He has his own band called Spirit in the Dark.

Based in Oslo, the vocalist, pianist and composer Susanna formed her Susanna and the Magical Orchestra duo in 2000 for exquisite, minimalistic interpretations of pop songs, both mainstream and leftfield. Since 2007 her songwriting has travelled in multiple directions, from her Meshes of Voice project with transgressive singer Jenny Hval, to seengs of Norwegian poet Gunvor Hofmo, and the collaboration with new music group Ensemble neoN on The Forester (2013). Go Dig My Grave (2018) was called ‘a wondrous, haunting bunch of covers’ (Uncut). 2019’s Garden of Earthly Delights was praised as ‘intriguing’, ‘brilliant and compelling’ and ‘heavy stuff’ in the international press, and was nominated for a Norwegian Grammy award (Spellemannprisen) in the Open category. Last year’s Baudelaire & Piano received 4 stars in Financial Times, Irish Times in addition to being Critic’s Choice in The Guardian.

She is a three-times winner of Norwegian Grammys for previous releases. Superfan Bonnie Prince Billy’s recent Wolf of the Cosmos release was a cover of the whole of her 2007 album Sonata Mix Dwarf Cosmos. She puts out her music on her own label, SusannaSonata.