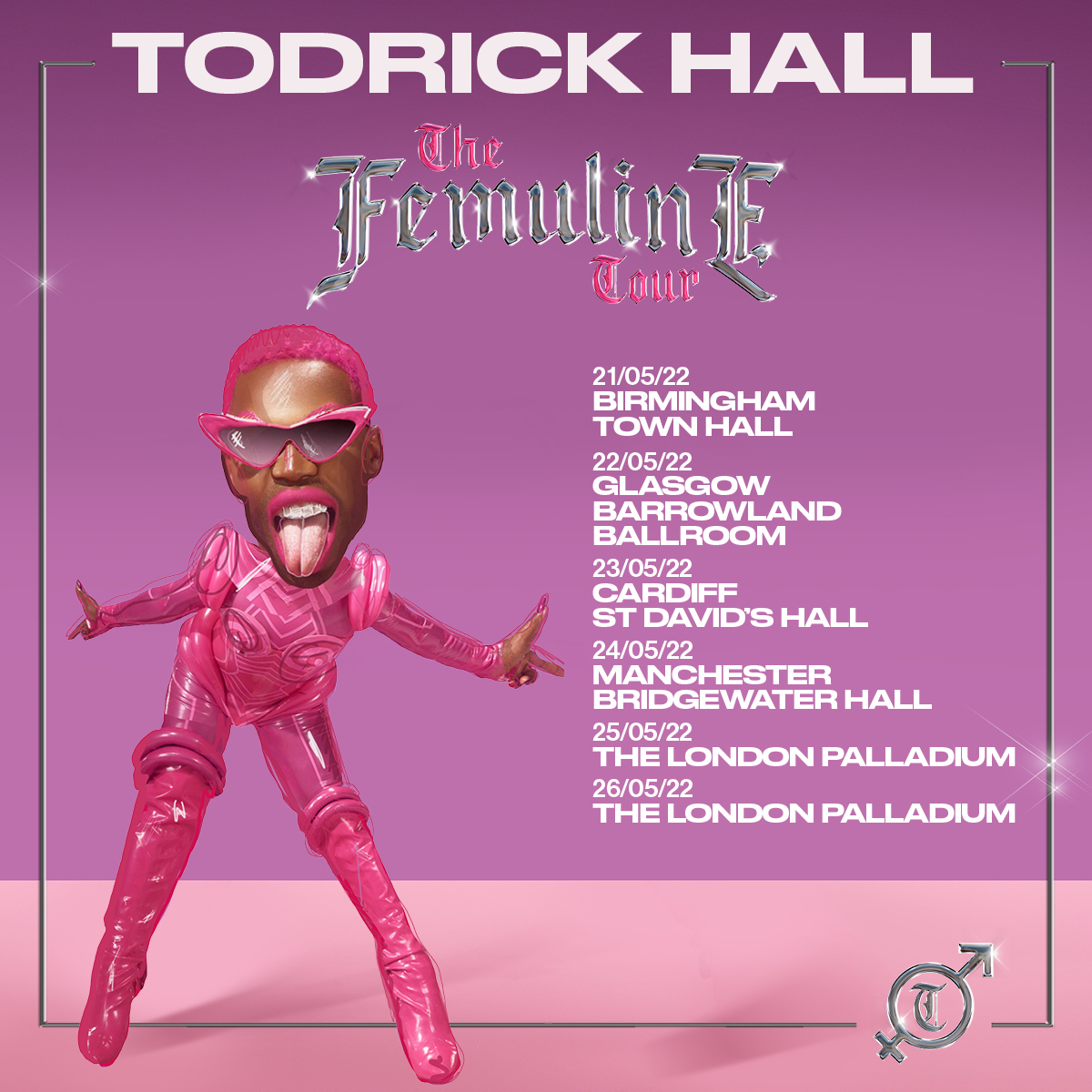 Todrick Hall has become an inspirational, larger-than-life character, simply by embracing everything he wants to be to become everything he can be. With over 800 million views at YouTube, he’s collaborated with Beyoncé, and starred in a selection of Broadway smashes. Billboard’s cover story summarised his huge appeal: “He’s part old-school theatre showman, part new-school internet personality, part drag queen… he’s also pushing the boundaries of LGBTQ representation in a business that has historically been unwelcoming to queer people of colour.”

Now Todrick Hall shares the biggest, boldest music project of his career with the release of his new album ‘Femuline’ out now via frtyfve. In celebration of the new album, Todrick has also just announced his ‘Femuline’ EU & UK tour for May 2022, which will see him perform two very special shows at the London Palladium on 25th & 26th May 2022.

‘Femuline’ is a huge step forward from Todrick’s 2020 EP ‘Quarantine Queen’. There’s a new confidence and power to his voice, while the songs are stronger, sassier and even more immediately striking. That’s not to say that Todrick has lost any of his magnetic charisma, irresistible lust for life or ballsy sense of humour: it bursts out of the speaker at every turn. And who else would dare to name a track ‘Dick This Big’?

Todrick adds, ““It has taken me years and years, even after coming out, to be this comfortable embracing my masculine and feminine sides. I’m so excited to give people permission to live as their fullest and truest selves with this music that I handcrafted specifically for the gay community. But I also feel that my music will resonate with people of all age groups and from all backgrounds.”

Another standout moment is the new focus track ‘Queen’, which has everything it takes to be a future Pride anthem. It’s a defiant statement of self-empowerment as Todrick declares, “I was born with glitter running through my veins, I don’t give a fuck what people say… I was born to be a queen.” And he’s never sounded so good, pounding through a modern day Hi-NRG pop classic like his life depends on it.

‘Femuline’ also features Todrick working with a host of famous names. His collaboration with the Queen of Funk, Chaka Khan, delivers more ‘Fabulosity’ than one track can contain, while Nicole Scherzinger features on ‘Show Off’ extending his perfectly poised pop proficiency. Teaming up with Brandy on the sparkling showcase ‘Click Clack’ sashays with throwback R&B style, Tyra Banks brings authentic fashionista vibes to ‘FASHÓN’, while TS Madison’s feature on ‘Dick This Big’ results in the kitschiest hip-hop showtune imaginable.

The album was written entirely by Todrick, with production from the Grammy-winning Wiidope (Nicole Scherzinger, Ciara) and Jeeve (Bruno Mars, Britney Spears).

Todrick’s unstoppable, self-sustained rise has taken him a long way from his roots in the tiny Texan town of Plainview. He quickly went from national fame on ‘American Idol’ to international attention through ‘RuPaul’s Drag Race’ to commanding a huge global following on social media. And that’s before you even factor in his Broadway runs in ‘Kinky Boots’, ‘Chicago’ and ‘Waitress’, or his role as dance captain on the BBC’s ‘Greatest Dancer’. His profile continued to explode in the wake of his COVID-19 themed anthem ‘Mask, Gloves, Soap, Scrubs’, which he followed by hosting Global Pride 2020 for YouTube.

The full list of live dates are below. Tickets are on sale now and available from www.gigsandtours.com / www.ticketmaster.co.uk / www.todrick-hall.myshopify.com

VIP Packages for the UK dates are also available via www.sjm-vip.com