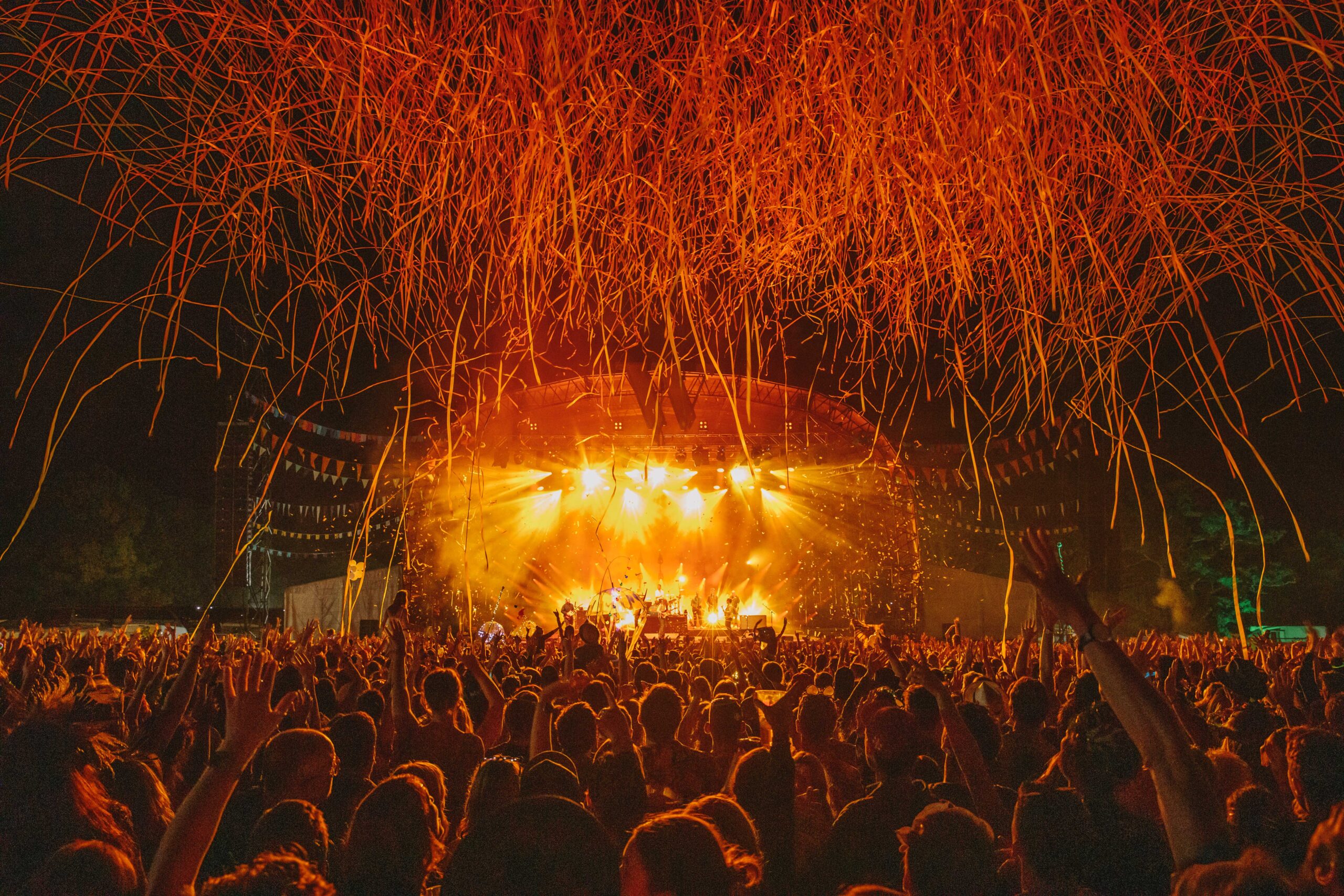 Blazing in to thrill, the mighty Wilderness returns. Famed for its’ overarching line-up spanning the arts in all their glorious forms, this year is as glittering as ever and primed to bring music, sequins and euphoric smiles back to the rolling Oxfordshire parkland.

The glorious Wilderness Stage is an eclectic beast and this year’s homegrown headliners are all genre-smashing: international DJ Jamie xx has always dipped his toe in many musical waters from house to future garage to techno, the Mercury-nominated, heartfelt rapper Loyle Carner floats above any particular scene or genre, multi-talented beat-maker and the MOBO and Brit winning jazzy, upfront Hackney crew Rudimental take crowds by storm with their high-energy brand of live drum and bass.

Letters Live return to headline the Talks programme at The Atrium for a fourth year. Always star-studded, their Wilderness guest list in previous years has included Olivia Coleman, Benedict Cumberbatch, Ben Kingsley and Russell Brand. As usual, this year’s line-up is a tightly kept secret. Its mission has always been the same: to harness the unrivalled power of old-fashioned correspondence with the help of an ever-changing cast of some of the most acclaimed performing talent from around the world.

The Valley is your seismic slab of cutting-edge electronic music served over a forested amphitheatre, topped with lasers and pulsing with insane production. This year it’s The Blessed Madonna, Jayda G and Eats Everything on the ones and twos – three DJs at the very top of their game who are expert at moving a crowd. Bristolian treasure Eats Everything is a magnetic Wilderness regular who always delivers and is on constant international demand for his high-octane house which will lift The Valley floor. Masterful American DJ The Blessed Madonna comes fresh from her BBC6 Music residency to deliver a set informed by deep crate digging and Canadian-born producer Jayda G has stealthily smashed through the dance music underground to claim her rightful place at the top.

Wilderness were the first to introduce long table feasting as a festival way of life and have always been untouchable with their food programming. This year is no different, as Wilderness announces its first fully vegetarian and vegan banqueting tent – The Wilderness Kitchen. Helen Graham, Robin Gill, Lee Westcott and wild food restaurant Native will each join forces with Social Pantry to deliver the four mouth-watering vegetarian and vegan feasts.

The Feasting Tents are Wilderness’s answer to bookable restaurants and feature some of the finest chefs from across the country. Continuing the Woodfired and Friends series, Ben Quinn’s Woodfired Canteen deliver their own feasting tent for the whole weekend, cooking over live fire for long table extravaganzas and featuring guest chefs such as Smokestak’s David Carter. Patty and Bun return with their winning beats and burgers formula, with more to be announced.

Flank will take on a field restaurant for 2021, with guest chefs joining them to cook on the fire pit each day. And the Dining Room returns, with its All Killer No Filler wine bar, The Cellar, food and drink panels hosted by Lisa Markwell and bookable food and wine pairings that team top sommeliers with exciting young chef talent. The Spread Eagle will be turning up the volume every night with party vibes and DJs until late.

The beating heart of Wilderness comes alive after sundown:  late-night  dancefloors this year include  Shangri-La creators  Continental Drifts who  reliably provide  jump-up, heavy brass ‘n’ bass, funk and reggae and  intimate disco  The Hustle – the  sweat-drenched setting for extra-special secret sets by artists  cherry picked from elsewhere on the bill.

Notorious for scene-leading theatre and arts booking, Wilderness are renowned for commissioning unconventional pieces and securing UK exclusives of new works. The Atrium is the flagship stage where high arts, music and participatory threads collide and is a who’s who of some of the most influential organisations working today. The pioneering likes of Roundhouse and Letters Live join Hip Hop Karaoke, Missy Fatale, Marcel Lucont and UK festival favourites The Dance Off Crew.

A festival within a festival, the Wilderness Talks & Debates programme has been a core pillar from the start. From the deeply serious to the highly irreverent, for Season Ten the line-up features His Dark Materials creator the mighty Philip Pullman in conversation with BBC producer John Lloyd. The bill always features heavyweight institutions who specialise in raising questions and challenging beliefs. This year, Wilderness welcomes back The RSA, Intelligence Squared, The Sunday Assembly, The Idler Academy and many more.

The sprawling music and arts proposition comes with a side of silliness, as games, theatrics and mass participatory escapades ring out across the Village Green.  The Club House presented by Village Circus is the capital of all things silly. Their Sports Day hosts are famed for their off-the-cuff comedy and relentless energy. The Night Games return for another year of glow in the dark chaos and the green just wouldn’t be the same without Disco Dodgeball. The Wilderness Cricket Match hosted by Bearded Kitten is the original festival cricket fixture, featuring a swelling line-up of heroes, villains and dubious umpiring decisions.

The Sanctuary is the capital of calm, nourishing body and soul in myriad ways and connecting a community of practitioners and partners, yogis, wellbeing professionals, astrologers, doctors and zen masters. This year, on the bill are triyoga, Maude Hirst, The Naked Professor, Tania Brown Yoga, Island Feather SUP Yoga, Yoga Brunch Club and many more, leading masterclasses, sessions, workshops and talks. The blissful wood-fired Lakeside Spa is your own slice of utter paradise for those in search of pampering.

The programme for families is as colourful and imaginative as ever, with award-winning Cornish troupe Rogue Theatre making the stunning landscape their set for their exciting woodland shows. Storystock, the travelling story circus spark imaginations and The Flying Seagulls are returning to spread light, love and inspiration. The Art Studio host a rolling programme of workshops and classes in fabulous arts, crafts and pursuits.

There is a return to a celebration of classic Wilderness traditions. A nod to old school origins. The programme is inspired by the landscape and the natural world and as such is a true celebration of the wild, of adventure and of the wilderness itself. Dive in the lakes, roll in the grass, ride a bike or a horse through the forests, take a wild medicine walk or foraging class and build a den. Camp under the stars and then dance like there’s no tomorrow to some of the mightiest sounds on the planet. After all, that is what Wilderness is all about.

Summer Release tickets have SOLD OUT with a limited final release going on sale Tuesday 8th June via the waitlist only.

TICKET INFORMATION
General release tickets for Wilderness 2021 have sold out. Sign up to the wait list for the best chance of getting tickets at our final release – https://www.wildernessfestival.com/tickets/

A small number of tickets will be released on Tuesday 8th June via the Wilderness waitlist only. Sign up here https://www.wildernessfestival.com/tickets/