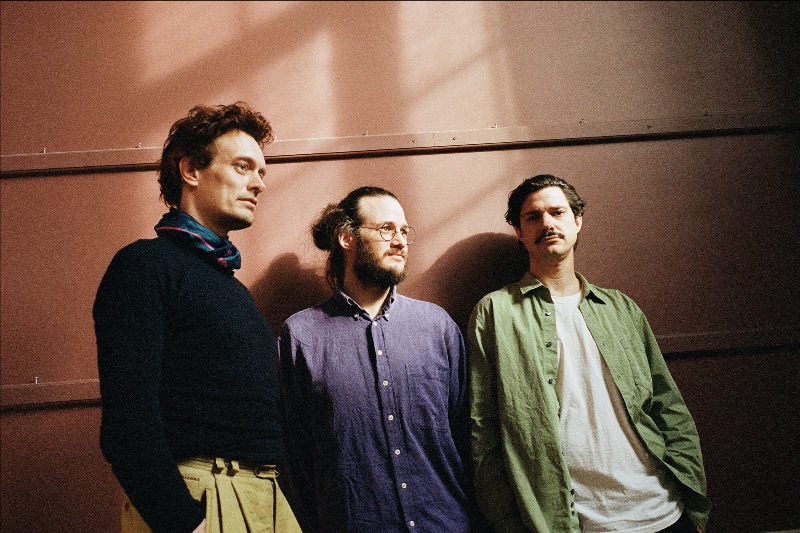 Denmark’s much celebrated trio Efterklang have announced a new album, ‘Windflowers’, which is set for release on October 8th through City Slang, and have shared the album’s first single and accompanying video, “Living Other Lives“.They have also confirmed a live stream concert on June 27th in addition to tour dates across Europe throughout late 2021 and early 2022.

Every year as spring arrives, a sea of tiny flowers blossom across the Danish forest floor. They’re an explosion of colour, a symbol of hope and change, disappearing as quickly as they arrived and exposing the constant cycle of nature. They are known colloquially as ‘Windflowers’.

For over twenty years, Efterklang have been pushing the barriers of experimental, electronic, emotional chamber-pop. Announcing their sixth studio album ‘Windflowers’, their first for City Slang, the Danish trio of Mads Brauer, Rasmus Stolberg and Casper Clausen continue a creative journey that’s brought them closer together, even as their lives grow apart. Channelling the motifs of hope and change its namesake flora represents, the album sees their many years of collaboration and experimentation distilled into some of their finest and most direct melodic moments to date.

Speaking on the first single “Living Other Lives“, Casper comments: “Living other lives started out as a jam in my Lisbon studio during Spring 2020 lockdown. I was playing around with my 404 sampler and I found that kind of groove that makes my head bop – put some samples on it, and I could listen to it forever – a good sign. So I was just having that on loop while scrolling through my instagram feed. The lyrics sort of came out of that moment; living other lives, imagination jumping from one life/image to another, revisiting, updating myself, absolutely bodiless, while scrolling up and up with my thumb. It’s a fascinating world we’re living in, so strangely symbiotic and aware of what everybody’s doing, I feel I’m living multiple lives all at once. Watching all these people expressing and changing themselves far away, out there around the planet.”

Video director Søren Lynggaard Andersen adds: “I visited Efterklang in the studio when they were in the process of recording their new album. I had packed this old russian 16mm camera and I wasn’t even sure if the camera actually worked, but thankfully it did (sort of). The video that came out of it I feel is a charming and genuine look at the band together in the studio and in the nature of the island of Møn in the south of Denmark.”

On June 27th Efterklang will do a live-stream concert from the first edition of Efterklang’s Sommertræf (Danish for Efterklang’s Summer Meet-up) – expect that a handful of new songs to be premiered. Tickets here.

More about ‘Windflowers’:
As Efterklang, like most of the world, watched their 2020 summer schedule dissipate, they turned their attention to creating something new. With what felt like all the time in the world and nothing to prove, Casper and Mads set about sketching ideas for songs, just to see where it would take them.

With their ability to bring in guests and session musicians restricted, Efterklang had to challenge their usual creative process and accept their own limitations. The genesis of ‘Windflowers’ was back to basics and became an exercise in putting their vast and dynamic experience to play. Self-producing the record, they reconnected with the playfulness and joy of making music together, embracing their distinct pop sensibilities and creating their finest melodic moments to date.

The album finds Casper singing in English again, for the most part. It’s rich and intimate, the sound of three friends finding each other at a time when the world around them felt unstable. The record is about existing, alone, together and in nature. It’s about reconnecting, and letting each other grow.

With no set deadline and no boundaries, they were able to create freely. ‘Windflowers’is inspired by the pure joy of music. Its creation was escapist playtime and the result was over seventy new song ideas, more demos than they’d ever started an album with. It took two days just to listen through to everything. “We never talked about what songs shouldn’t be on the album, we talked only about the songs that should be on the album, and that was the key,” says Rasmus.

Over the course of recording the band made five trips to residential studio Real Farm on the island of Møn, south of Copenhagen. They worked across all the seasons, experiencing everything from bright sunshine to freezing snowstorms. “You feel the elements much more when you’re not in the city, and it’s good to be reminded that we’re all a part of nature,” says Mads.

Friends from school, Efterklang released their debut album ‘Tripper’ in 2004, a dynamic record of sparse electronica and rich harmony which won them international acclaim. Over the years they’ve grown a devout fan base, not only with their cinematic, spacious and captivating compositions, but with their enduring experimentation and inclusivity. After releasing 2012’s ‘Piramida’, the trio took time away from the traditional album cycle, forming Liima with Finnish percussionist Tatu Rönkkö, co-writing the immersive opera ‘LEAVES: The Colour of Falling’ as part of the Copenhagen Opera Festival and participating in the Berlin-based PEOPLE festival. That journey culminated in 2019’s ‘Altid Sammen’, a collaboration with Belgian baroque ensemble B.O.X which grew into an Efterklang record.

Efterklang’s constant innovation and openness for collaborating extends past the band’s core members and into the world of the listener. Across their history, the group has engaged in ideas that break tradition, introducing their audience as part of the creative process. From encouraging DIY screenings of documentary An Island to championing musical education with their Efterkids initiative to forming audience choirs on their last tour, they’re constantly pursuing moments of connection. The essence of togetherness reverberates through the band’s past and present, and has never felt so vital.

Now sharing new music through their Developed platform, fans are invited to collaborate and respond as they listen to the new tracks for the first time. Collaboration and community has always been the compass of Efterklang, and the group keeps looking for new ways to build a meaningful correspondence with their audience, to be inventive and inclusive. “We don’t want to play to people, we want to perform and make music with people,” Rasmus explains.

After all their years together, Mads, Casper and Rasmus share the real intimacy of family. ‘Windflowers’ is proof that connection and community can triumph over adversity, and the result is something truly beautiful.

‘Windflowers’ will be released on October 8th through City Slang. Pre-order it here.