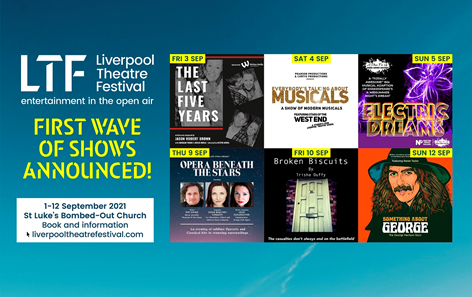 The first wave of shows for the second annual Liverpool Theatre Festival taking place in September have been announced today (Friday 25 June), with tickets going on sale at 10am.

Bill stepped in to bring entertainment back to audiences after theatres across the country were ordered to close their doors as part of the first Coronavirus lockdown in March 2020.

The outdoor festival went on to be a huge success, scooping an award and shortlisted for further accolades, winning praise across the industry for once again giving live performance a platform during the most challenging of times.

The 10-day event features mainstream and established acts, artists, and productions – giving Liverpool and regional talent a platform for live outdoor performance. The festival will adhere to all Covid-19 and Government guidelines required at the time.

The festival’s first six shows have been announced as The Last Five Years on Friday 3 September; Everybody’s Talking About Musicals on Saturday 4 September; Electric Dreams on Sunday 5 September; Opera Beneath The Stars on Thursday 9 September; Broken Biscuits on Friday 10 September; with Something About George – The George Harrison Story closing the festival on Sunday 12 September. Tickets are on sale now. More shows will be announced in the coming weeks.

The announcement comes just two weeks before Little LTF, the festival’s new sister event takes place. Little LTF will run between Monday 12 July and Sunday 18 July 2021, it will premiere and champion 14 new works at St Luke’s Bombed Out Church in a different stage set-up to the main festival.

Producer and artistic director Bill Elms commented: “Since we announced the return of Liverpool Theatre Festival back in March, we’ve been met with nothing but excitement and a real appetite for a return to theatre and live entertainment. It has been a real pleasure and deeply inspiring talking to the incredibly talented creative teams, who are literally counting down the days until they can once again entertain live audiences and do what they do best.

“We’re delighted to announce the first wave of shows for our September festival, the timing is perfect and just two weeks before the inaugural staging of Little LTF, our new sister festival to premiere and champion new works and rising talent. We will be revealing the full programme for Liverpool Theatre Festival in the coming weeks. We set the bar high last year, and we can confidently say that this year the quality and talent is once again excellent. Come and join us – theatre is most definitely back.”

The Last Five Years is on Friday 3 September 2021, with performances at 5pm and 8pm. Running time 75 minutes no interval.

Jason Robert Brown’s Drama Desk Award-winning musical, The Last Five Years, is an intimate look at the relationship between two New Yorkers – an actress and a writer, who fall in and out of love over the course of five years.

This modern, one act musical masterpiece is emotionally powerful and honest with a score that has secured its status as a modern classic. The musical’s unconventional structure pulls the audience in opposite directions with Cathy’s story unfolding in reverse from the end of their turbulent relationship, while Jamie tells his story chronologically from the spark of their initial meeting, taking audiences on an emotional rollercoaster through the joyous and the tragic.

This production of The Last Five Years is presented by Tread Productions and stars real-life married couple Helen Noble (Hollyoaks) and Graham Tudor (West End leading actor), directed by Iestyn Arwel, with musical supervision by Jordan Alexander. It gained outstanding reviews in June 2017 during a run at Liverpool’s Epstein Theatre.

A film adaptation was released in 2014 starring Anna Kendrick and Jeremy Jordan. The musical was originally produced for the New York stage by Arielle Tepper and Marty Bell. Originally produced by Northlight Theatre, Chicago, IL, in arrangement with Music Theatre International (Europe). All authorised performance materials are also supplied by MTI.

Everybody’s Talking About Musicals is on Saturday 4 September 2021, with performances at 6pm and 8.30pm. Running time 75 minutes no interval.

Pearson Theatre Productions and Curtis Productions collaborate for the first time to present Everybody’s Talking About Musicals, a fabulous night of musical theatre.

Audiences will be treated to a mixture of talent from West End shows such as Kinky Boots, SIX The Musical, Mamma Mia, and &Juliet, with support from some of the city’s finest musical theatre talent and stars of the future from the award-winning Liverpool Theatre School. This vibrant and electrifying show of modern musical theatre is an exciting addition to the LTF programme. Cast to be announced.

Electric Dreams is on Sunday 5 September 2021, with performances at 4pm and 8pm. Running time 2 hours, 10 mins including interval.

A Place for Us Theatre Company present Electric Dreams, a 1980s outdoor musical adaptation of Shakespeare’s A Midsummer Night’s Dream. The show was originally produced in partnership with Norton Priory Museum & Gardens in June on the ancient ruins to sell-out audiences, as part of its Igniting Imaginations programme. A spectacular musical theatre event.

Set against an awesome eighties inspired soundtrack, the cast features West End stars Zoe Curlett and Keiron Crook as the warring Queen and King of the Fairies, joined by a professional cast, live band, and young performers embarking on their journey into the performing arts industry.

Audiences will be transported to Midsummer Night in 1980s Athens. Four young lovers and a group of oddball actors find themselves entranced and entrapped in an enchanted forest, where Rock Diva Fairies rule and a mischievous sprite is hell bent on causing havoc.

Original production in partnership with Norton Priory Museum & Gardens, made possible with funding from Arts Council England and presented as part of Halton’s Borough of Culture Year 2021.

Opera Beneath The Stars is on Thursday 9 September 2021 at 7.30pm. Running time 2 hours including interval.

With live piano accompaniment, this enchanting gala evening will feature the most well-loved and popular songs from Grand Opera, Operetta, Neapolitan Song, Modern Classical and Musical hits, all performed by world-class performers in beautiful evening wear. Suitable for opera lovers and newcomers to opera alike.

Broken Biscuits is on Friday 10 September 2021, with performances at 6pm and 8.30pm. Running time 60 minutes no interval.

Rita and Maggie were lifelong friends until a devastating tragedy shattered both their lives and their friendship, with emotions high things may be taking a turn for the worst. Maggie is desperate to save the friendship, but a packet of ginger nuts and a cuppa may not be enough to resolve this situation. Friendship, love, laughter, sadness, and hope are all at the centre of this touching story.

Broken Biscuits is returning to the stage after sell-out performances around Liverpool theatres and Edinburgh Festival Fringe. Cast to be announced.

Something About George – The George Harrison Story is on Sunday 12 September 2021, with performances at 5pm and 8pm. Running time 75 minutes no interval. The announcement coincides with Global Beatles Day.

They say All Things Must Pass. However, George Harrison’s name forever lives on. So where does life take you after being in the greatest band in the history of the world – this new show answers the question and comes from the creators of Something About Simon – The Paul Simon Story.

Something About George – The George Harrison Story features Daniel Taylor, and tells the truly remarkable tale and pays tribute to one of music’s most understated icons.

Featuring beautiful songs My Sweet Lord, Something, and Handle With Care, the show also includes incredible solo material and music from rock ‘n’ roll’s greatest supergroup, The Traveling Wilburys which was made up of Bob Dylan, George Harrison, Jeff Lynne, Roy Orbison, and Tom Petty. And not forgetting more than just a few classics from The Beatles. From heartbreak to hedonism and songwriting to success, Something About George will showcase a life that was anything but quiet.

OPERA BENEATH THE STARS

SOMETHING ABOUT GEORGE – THE GEORGE HARRISON STORY