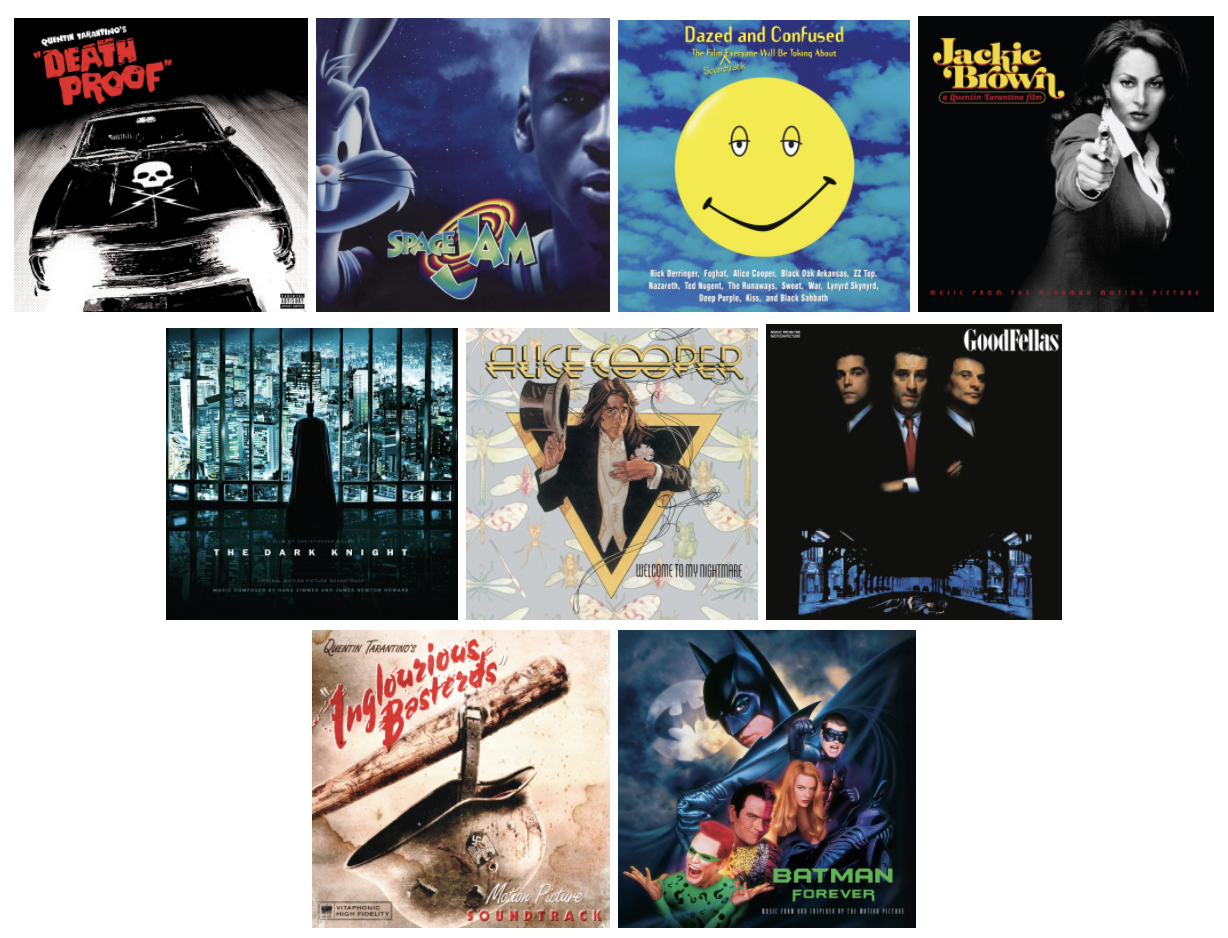 The Soundtracks To nine Memorable Movies Will Be Released On Vinyl

Break out the popcorn and turntables because Warner Music Group is taking music fans to the movies this September with its upcoming vinyl soundtrack series. WMG will showcase its impressive catalogue on the 3rd and 17th September with special vinyl reissues for acclaimed soundtracks to blockbuster films like Martin Scorsese’s Goodfellas, the original Space Jam, which is celebrating its 25th anniversary this year, and three Quentin Tarantino films, Jackie Brown, Inglorious Basterds, and Death Proof, to name a few.

Among the rarities is the soundtrack for Goodfellas, which hasn’t been produced on vinyl since the film was released nearly 30 years ago. It will be reissued on blue vinyl on 3rd September. This will also be the first global pressing for the album, which features songs by Tony Bennett, Aretha Franklin, The Shangri-las, and many more.

Music has always played a pivotal role in Quentin Tarantino’s movies, including soundtracks to three of his films: Jackie Brown (1997), Death Proof (2007), and Inglorious Basterds (2009). Pressed on blue vinyl, Jackie Brown: Music From The Miramax Motion Picture features songs by Bobby Womack and Peace, Bill Withers, and The Delfonics. Death Proof includes rare music from the ’60s and ’70 and will be available on tri-color red, clear, and black vinyl. And finally, Quentin Tarantino’s Inglourious Basterds: Motion Picture Soundtrack will be pressed on blood-red translucent vinyl.

The collection also features two soundtracks from the Batman franchise. The first being Batman Forever – Music From The Motion Picture out on 3rd September, which contains several hit singles, including; Seal’s “Kiss From A Rose” which won three Grammy® Awards, an MTV Movie Award for “Best Song” and charted at number one in the US Billboard Top 100. In addition, the Grammy® Award-winning The Dark Knight (Original Motion Picture Soundtrack) by Hans Zimmer & James Newton Howard will be out on 17th September.

Other highlights include Alice Cooper’s 1975 concept album Welcome To My Nightmare and the soundtrack for the 1993 hit movie Dazed and Confused, whichis well known for its 70s rock theme and showcases many essential songs from the era, including “Paranoid” by Black Sabbath,  “Low Rider” by WAR,  and  “Rock n Roll All Night” by Kiss.

The soundtrack series is a potent reminder of how integral music is to storytelling in films. Whether it’s an entire score by Alice Cooper in Welcome To My Nightmare or The Rolling Stones’ “Monkey Man” blasting during the frenetic helicopter scene in Martin Scorsese’s Goodfellas – certain songs are forever linked to specific movie moments.

Alice Cooper – Welcome To My Nightmare

Batman Forever: Music from the Motion Picture is the soundtrack to the 1995 Tim Burton-produced movie Batman Forever. It was nominated for multiple Academy and Golden Globe awards.  The soundtrack contains several hit singles, including; Seal’s “Kiss from a Rose,” which won three Grammy® Awards, an MTV Movie Award for “Best Song,” and charted at number one in the Billboard Top 100.  Plus U2’s “Hold Me, Thrill Me, Kiss Me, Kill Me,” and songs from The Flaming Lips, the Offspring, Nick Cave, Michael Hutchence (of INXS), PJ Harvey, and Massive Attack.

The 1993 hit movie Dazed and Confused is well known for its 70s rock-themed soundtrack, featuring songs by Alice Cooper, War, ZZ Top, Black Sabbath, and others.

Martin Scorsese’s Motion Picture Goodfellas needs a little introduction. It is widely regarded as one of the greatest films ever made and the ultimate mobster movie.  The soundtrack features artists Tony Bennett, Aretha Franklin, The Shangri-las, and many more. However, it is a rare find on vinyl, having only been pressed in a couple of small runs in the early 1990s.  This 1LP release will be the first global pressing.

Jackie Brown was initially released in 1997. The soundtrack features dialogue from the movie, which starred Samuel L. Jackson and Robert De Niro alongside soul-focused tracks including; “Across 110th Street” Bobby Womack and Peace, “Who Is He (And What Is He to You)?” by Bill Withers, “Didn’t I (Blow Your Mind This Time)”  by The Delfonics, and “Inside My Love” by Minnie Riperton.

The soundtrack to Quentin Tarantino’s 2007 movie Death Proof features rare music from the 1960s and 1970s, including The Smith’s “Baby It’s You,” Willy DeVille’s “It’s So Easy,”  The Coasters’ “Down In Mexico” and April March’s “Chick Habit.”  It is interspersed with clips of dialogue from various scenes in the film.

Quentin Tarantino’s WWII film Inglourious Basterds was released in 2009 to both critical and commercial acclaim. The movie won multiple awards, including an Academy Award, BAFTA, Screen Actors Guild, and Golden Globe, and, like all of Tarantino’s films, the soundtrack played a pivotal role. It was nominated for a Grammy® Award and is a mixture of scores from legendary Hollywood composer Ennio Morricone and a selection of quirky, rare tracks, amongst them David Bowie’s theme from the 1982 film Cat People.

Grammy Award-winning The Dark Knight: Original Motion Picture Soundtrack (sequel to Christopher Nolan’s 2005 Batman Begins) was composed by a collaboration between Hollywood film score legends Hans Zimmer and James Newton Howard. It won multiple awards, including; winning a Grammy® Award for “Best Score Soundtrack for Visual Media,” “Best Music” at the Saturn Awards, and “Best Soundtrack” at the Brit Awards. It was also nominated for “Best Film Music” at the BAFTA Awards.  It also charted at #20 in the US Billboard 200.  It has been unavailable on LP since the original release in 2008.