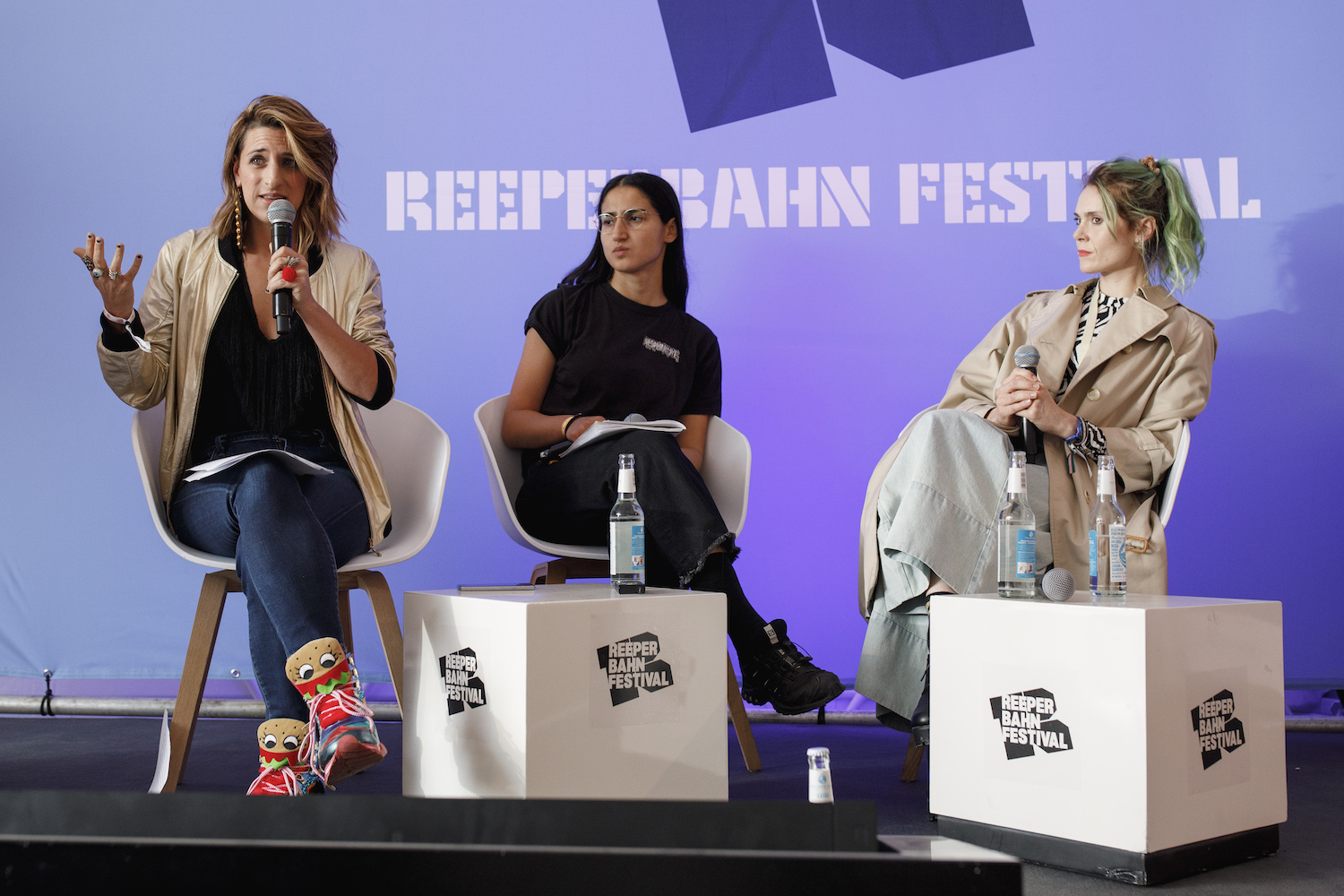 Today, Keychange announces a monumental milestone and impact on gender equality in the music industry and beyond. 500 music organisations from all over the world have now signed the Keychange Pledge. The pioneering international Keychange campaign invests in emerging talent whilst encouraging music organisations to sign up to a gender pledge to achieve at least 50% representation of women and gender minorities in an area of their work.

Started in 2017, Keychange has expanded at pace to become a global movement with pledge signatories across China, Hong Kong, Africa, Latin America and Australia. Keychange is a collaborative project that brings together all sectors of the industry in a movement for change – festivals, record labels, broadcasters, venues, publishers, collections societies, orchestras with many more are involved.

The 500th signatory is EBU Music – part of the European Broadcasting Union (EBU), the world’s foremost alliance of public service media organisations. EBU Music acts as a platform for the exchange each year of around 3,000 concerts, making it the world’s largest provider of live music. It is set to collaborate with Keychange to promote positive action towards better gender representation in music broadcasting, and throughout the EBU network.

“The European Broadcasting Union (EBU) is working hard to ensure our organization and activities properly reflect the diverse communities we serve and the world they live in. It takes time but making this commitment visible is an important step. I’m delighted that we will be partnering with Keychange once more after our joint initiatives earlier this year to highlight the stark disparity in gender representation in the music industry. Signing this Pledge cements our commitment to increase visibility of these issues and amplify the voices of the many music bodies who are also signing in support of urgent and necessary change,”
– Vanessa O’Connor, Director, Member Relations & Communications, EBU

“Keychange has been instrumental in highlighting the explosive nature of gender inequality in music for the past four years. With a strong and ever-growing network, we have managed to raise awareness of the problem while implementing concrete actions. We are very proud that more than 500 organisations have joined the Keychange movement and we are particularly pleased that EBU Music have joined Keychange as a signatory.”
– Merle Bremer, Project Lead, Keychange

“There is gender disproportion in all aspects of the music industry. And it’s institutions like these (EBU Music) – established institutions – that are willing to discuss and address these very essential issues, that can bring about real change.”
– Peaches, Musician, director, performance artist and Keychange Ambassador

Keychange supports each signatory on their path to change, encouraging signatories to evaluate their current work, while opening the door to the new opportunities and talent that come from an equitable industry. Signatories also become part of Keychange’s wider network of signatories – a like minded global support network, all working towards a collective ambition of a more representative future for music. Join the global movement and tip the scales of progress by signing up for the Keychange Pledge at keychange.eu.

THE IMPACT OF KEYCHANGE ON THE GLOBAL MUSIC INDUSTRY

In most areas of the music industry, representation of women and gender minorities is 20% or less.

The pledge campaign by Keychange started in 2017 and the progress made by all signatories will be evaluated and reported on until 2023, culminating in a Keychange conference and gender representation report at Tallinn Music Week in 2024.

FROM POSITIVE ACTION TO CULTURAL SHIFT

As Keychange celebrates this milestone, it is clear that there is still a long way to go to achieve gender equality in the music industry.  Findings from an authoritative new study published June ’21 entitled “Inclusion in the Music Business: Gender & Race/Ethnicity Across Executives, Artists & Talent Teams” by the USC Annenberg Inclusion Initiative showed that across 70 major and independent music companies, 13.9% of top executives are from underrepresented racial/ethnic groups, 4.2% were Black and 13.9% were women. The figures point to slow progress in the music industry in 2021.

“By keeping the conversation fully on the agenda of all music sectors, we’re challenging the music industry to take responsibility for the existing inequality, and to action changes to achieve a more representative industry in the future. Keychange creates innovative frameworks for women and gender minorities to be present at any level and all areas of the music industry, to ensure that gender representation is a factor in all decision making. The implications of this are huge and varied. Through cumulative and sustained positive action, Keychange and its pledge signatories affect positive change which leads to cultural shifts, and ultimately systemic change. Right now, the music industry is on an upward trajectory of positive change but is still very much working towards a cultural shift.”

Furthermore the impact of the Covid 19 pandemic on women and minorities worldwide cannot be overstated. The findings outlined in the World Economic Forum’s Global Gender Gap Report 2021 in March 2021 were shocking and stark: “Another generation of women will have to wait for gender parity as closing the global gender gap has increased by a generation from 99.5 years to 135.6 years.”

“The widening gender gap is a real blow for the whole industry – governments need to act decisively to put this in reverse. More than ever, industry specific initiatives such as Keychange have a vital role to play in holding space and opportunities for the underrepresented. We call on music organisations to play their part by putting gender equality centre-stage and embedding it into the cultural recovery. We will drive momentum with the Keychange Pledge, committing new signatories to better gender representation across the globe. As an industry, if we choose to leverage the power of the whole workforce, we will be far better placed to contribute to a dynamic cultural economy. Keychange will do what it takes to help music organisations navigate this important journey”

Keychange has partnered with the United Nations Sustainable Development Goals Action Campaign and on 17th July, in partnership with Keychange partners Music Innovation Hub (Italy), Keychange Ambassador Samsaya will take part in a blueprint event ‘Play:Fair’ that will set new standards for a sustainable future in the music industry. Sign up to join online, or in Milan here.

‘We believe in the power of music to inspire and mobilize people around the world to reimagine a more just and sustainable world. Together with partners like Keychange we can align the music industry with the Sustainable Development Goals. Through events like Play:Fair for People and Planet, we can music to inspire action and start a hope revolution.’

“Creating awareness, finding new solutions together and committing to a better balance in the music industry will not only make it richer in perspective, experience and knowledge, it will be more innovative and engaging. Intersectional gender equality requires that we all do the work and become aware of our own privileges. Knowing my own has made me more aware of what I can do in my corner of the world”

Keychange is funded by the Creative Europe Programme of the European Union and hosts an annual participant programme to champion, spotlight and upskill exceptional women and gender minority artists and innovators from 12 countries: Canada, Estonia, France, Germany, Iceland, Italy, Norway, Republic of Ireland, Spain, Sweden, Poland and the United Kingdom..

Today Keychange announces an Open Call, inviting women and gender minority artists and innovators from these 12 countries to apply to take part in the next 12 month programme, and to become part of the prestigious Keychange participant network.

The Keychange participant programme encourages women and gender minorities to demand more from the music industry and provides them with the tools to empower themselves and each other.

“The music industry is not an easy industry to be in. It’s the least professional industry I’ve encountered; we have very few industry standards. Since moving into film and television, it’s highlighted how compromised my entire career in music was. That’s what inspired me to work with Keychange, to do something about it – because people get hurt. I urge the music industry to take responsibility for change. Work with Keychange and other positive action organisations – set new standards and change the culture NOW. And if you’re a woman or gender minority working in music, apply to be part of the Keychange programme to BE the change you want to see.”
– Kate Nash, Musician, Actor, Activist and Keychange Ambassador