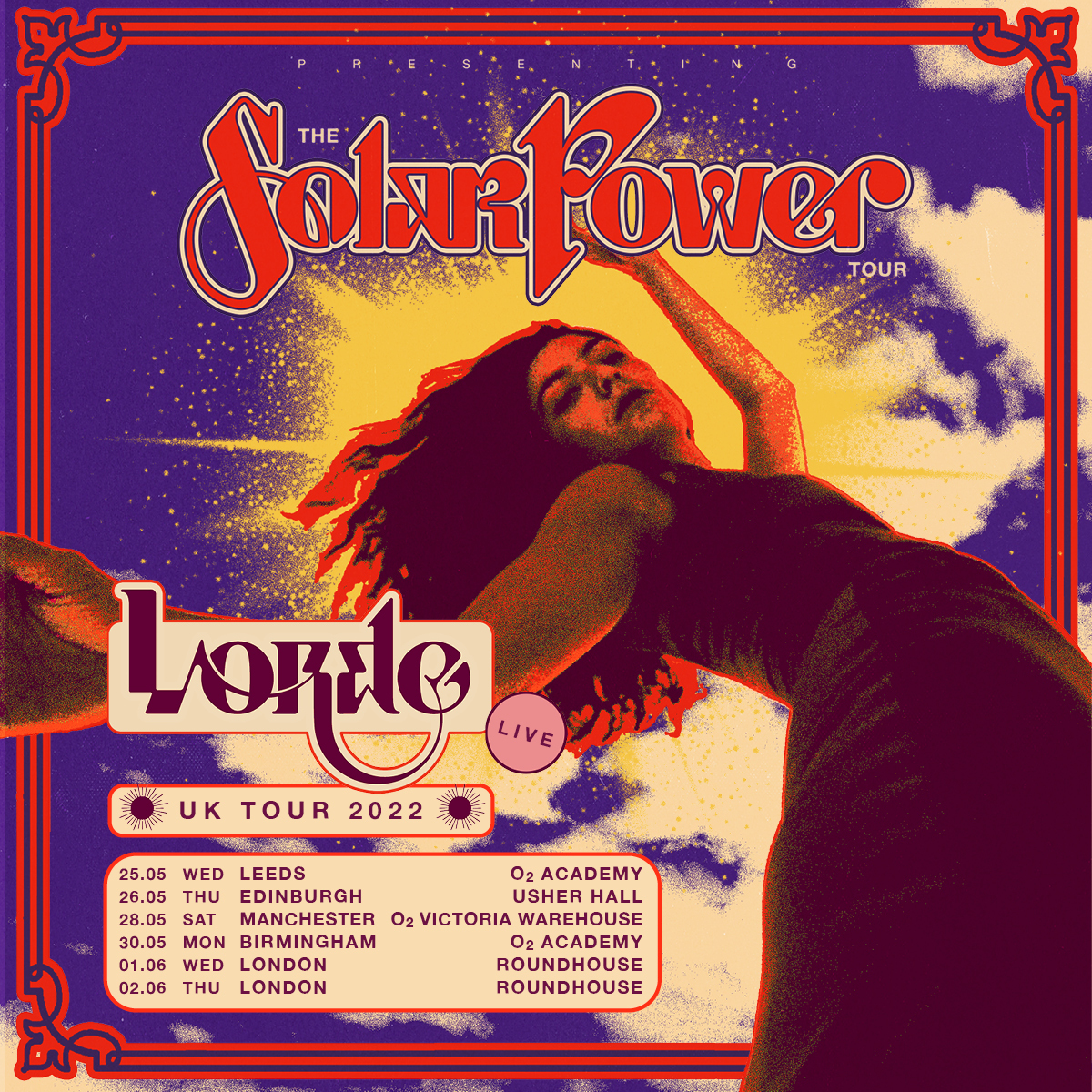 Today, after quickly selling out all of her UK shows including three sold out nights at London’s Roundhouse, GRAMMY® Award-winning multiplatinum artist Lorde has added a huge extra date at London Alexandra Palace on Tuesday 28th June 2022. Tickets go on general sale at 10:00am on Wednesday 30th June and will be available from www.gigsandtours.com / www.ticketmaster.co.uk / www.lorde.co.nz

Earlier this month LORDE also unveiled her new single “Solar Power” which appropriately dropped to time the only solar eclipse of the year. Lorde also revealed the release date as August 20th of her highly anticipated third studio album of the same name Solar Power alongside her 2022 World tour which includes a UK run of dates across Leeds, Edinburgh, Manchester, Birmingham and London.

“Solar Power” debuted to fan and critical acclaim, with Billboard stating, “Solar Power” is a fresh chapter in a riveting book, and Lorde fans should be thrilled to meet this new author.” The Guardian called the song, “… a distinct reinvention, one that gleefully puts a gap between Lorde and everyone else in terms of her creativity” while noting, “Lorde’s comeback single is a lesson in letting pop stars take their time.” Since its debut last week, the song has garnered five star reviews from places like NME and Pitchfork, has trended #1 worldwide across social media, raked in over 30 million streams in it’s first five days, and was #1 on Spotify’s Global and US Song Debut.  The song is the first single from Lorde’s forthcoming third studio album which will be released via Universal Music New Zealand on August 20th. The album includes 12 tracks and is produced by Jack Antonoff who she collaborated with on her chart-topping last album, Melodrama.

Of the album Lorde says, “The album is a celebration of the natural world, an attempt at immortalizing the deep, transcendent feelings I have when I’m outdoors. In times of heartache, grief, deep love, or confusion, I look to the natural world for answers. I’ve learned to breathe out, and tune in. This is what came through.”

Of the single she adds, “The first song, also called SOLAR POWER and written and produced by myself and Jack, is the first of the rays. It’s about that infectious, flirtatious summer energy that takes hold of us all, come June…”

To honor the natural world the artist is presenting the album in a first-of-its kind, discless format. An eco-conscious Music Box will be available for purchase as an alternative to a CD. This innovative offering will contain extra visual content, handwritten notes, exclusive photos, and a download card. The card will give purchasers a high-quality download of the music, two exclusive bonus tracks, and access to some special surprises along the way.

When talking about the concept Lorde says, “I decided early on in the process of making this album that I also wanted to create an environmentally kind, forward-thinking alternative to the CD. I wanted this Music Box product to be similar in size, shape and price to a CD, to live alongside it in a retail environment, but be something which stands apart and that’s committed to the evolving nature of a modern album.”