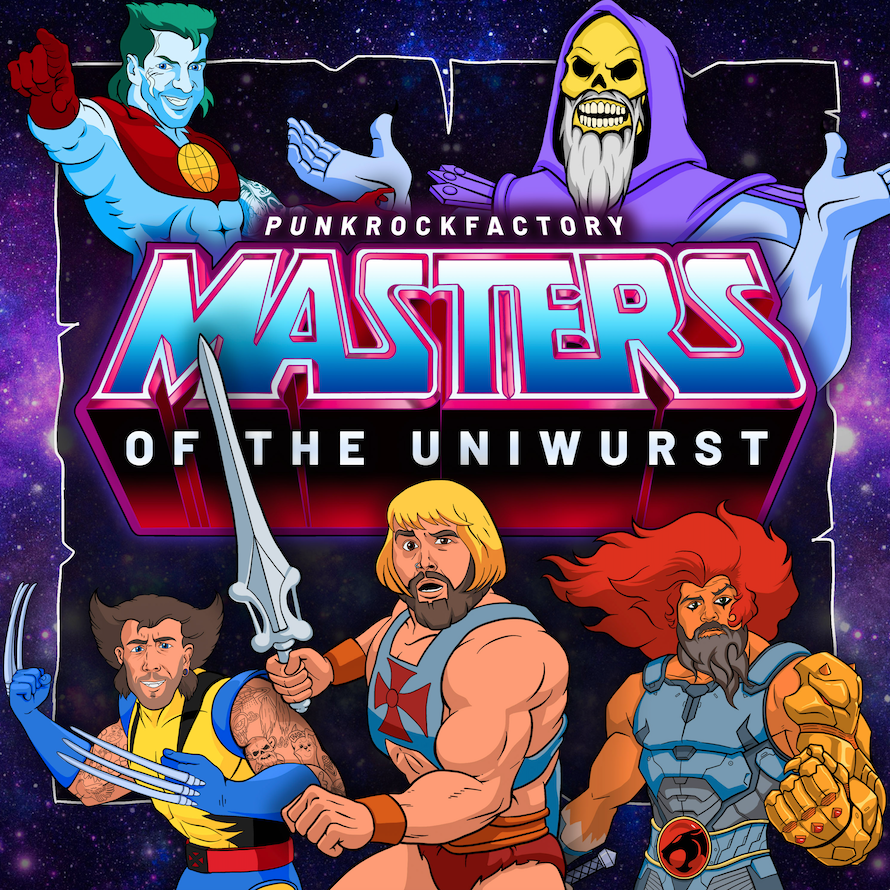 Formed in late 2014 in South Wales, Punk Rock Factory (Peej- vocals, guitar, Benj- bass, vocals, Ryan- guitar and Kob- drums, vocals), combine everything you love about 1990s/2000s punk rock, and reimagine classic and hit songs like you’ve never heard them before. From Meat Loaf to Disney, nothing is off-limits to them.

The band rehearse, write, record, mix, master and film everything themselves in one dedicated space that they affectionately call ‘The Sausage Factory’ and have no problem bringing friends along either. To date Punk Rock Factory has had singers from bands such as Protest the Hero, Bowling for Soup, Mest, Rufio, Belvedere, Ten Foot Pole and more, provide guest vocals on tracks. Firmly cementing themselves as a punk rock household name.

The band says, “All these TV themes hold a special place in our hearts as we grew up watching them all, and to get the chance to give them the PRF treatment is something really special for us. So grab your cereal, sit down in front of the TV and lets get strapped in… The adventure begins 30th July.”

After their first album ‘The Wurst Is Yet To Come’ gained over 1.3m streams on Spotify and an explosion of interaction on TikTok and other platforms, the band got to work on their second album ‘A Whole New Wurst’, consisting entirely of Disney classics with their unique special sauce added. After only two months the album gained over 2.4m streams, reached #48 in the UK album download charts and was played twice on BBC Radio 6 with Craig Charles, with the first play being the most requested song of the week.

With a heavy focus on digital content, especially TikTok & Instagram, Punk Rock Factory show no signs of slowing down and continue to grow faster each day, with their TikTok alone now sitting at over 350,000 followers and 1.9 million likes.

With thousands of new fans coming in every day and plans to release up to three themed albums per year, as well as bringing their own brand of high octane energy to live performances, Punk Rock Factory have arrived, and are here to stay.

Of the new album, the band adds, “After the success of the last Disney album, we wanted to work on songs that really meant something to us. We grew up watching all these shows, so this was a big honour and a huge nostalgia trip for us.

Just like ‘A Whole New Wurst’, we have stayed as faithful as we possibly could with all these songs. We wanted to do them as you remember them. This means we didn’t extend them, or change them, unless it really worked in the song’s favour.

We had so many suggestions and requests, and honestly, we looked at them all, but we’re only human, and we couldn’t fit them all in!

We hope you love each and every one of these tracks as much as we loved making them.

Masters of the Uniwurst is now available to pre-save on streaming/download platforms, and we’ve also put all the juicy new bundles up for physical pre-order!

There’s tons to choose from, and this time you can really get in the nostalgic spirit with a limited edition cassette of the album and a classic poster!”