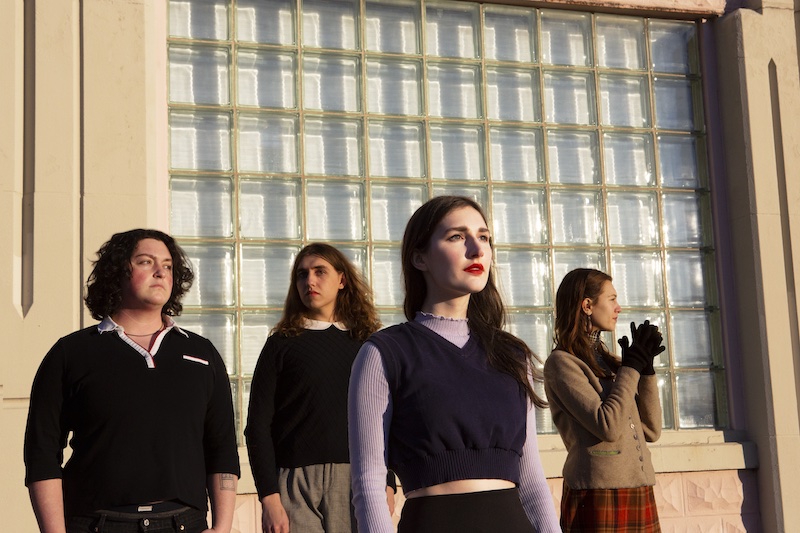 Ohio four-piece The Ophelias have announced their new album ‘Crocus‘ is set for release Sept 24th via Joyful Noise Recordings. Today the band are sharing the first single from the record “Neil Young on High“, which features Julien Baker.

Speaking about how the collaboration with with Julien Baker came to be, vocalist and guitarist Spencer Peppet explained “We met Julien for the first time in 2019 at a show we played in Nashville. She introduced herself and I tried to not show how nervous I was! About half a year into 2020 quarantine I worked up the nerve to ask if she wanted to feature on a song from the album we were working on. She recorded her parts in Tennessee and we talked virtually. Her harmonies reinvigorated the song completely: she added lightness, openness, but also depth and complexity. It’s incredibly cool that she put so much care into those parts.”

On the meaning of the song itself, Peppet added “After a relationship ended I would become obsessed with remembering every detail of the painful moments. I realised later that I don’t have to know what I was wearing or what song was playing to know that I was hurt deeply. I think “on high” means seeing someone as literally above you, better and cooler and more put together. I do love Neil Young, but in this case he represents a person, a time, a place.”

Filmed at various locations across including the American Sign Museum in Cincinnati, The Lodge KY in Kentucky, and the Valley View nature preserve, the band drew inspiration from everything from Twin Peaks to Joan of Arc for the “Neil Young on High” video. Peppet went on to say “I’ve had the photo of Lorde by Perou, the Fiona Apple photo by Joe McNally, and Zendaya’s 2018 Met Gala look saved on moodboards for years, and Jo has been obsessed with Joan of Arc for equally as long. We wanted to play with the idea of literally putting one’s guard up and letting it down, visually contrasted through the full armor and the lacey dress (though still with the sword). Jo specifically wanted to call back to the deep shadows of Renaissance paintings and 40’s noir films.The natural setting next to the bright neon lights added a tension that we felt matched the build of the song.”

Listen to “Neil Young on High” via other streaming services here:https://lnk.to/NeilYoungonHigh

The Ophelias contrast that lyrical clarity with full arrangements, adding strings, horns, winds, and synths to their already robust compositions. But even on “The Twilight Zone”, which utilizes almost every sonic tool at their disposal, there is intimacy and community. The band reached out to a slew of talented musicians to help flesh out the record, from classically trained bassoonists to friends they’d known since grade school (and even in one case, the parent of a friend). “We are lucky to be surrounded by so many brilliant friends in our hometown— people whose musical sensibilities we really trust, and who also have a good feel for where we’re coming from stylistically in our music,” Gutmann Fuentes says. “It was exciting to invite them in on these songs and let them do their thing.” Through all of the collaborative whirl, the record keeps the four members of The Ophelias at its core and blossoms outwards with the help of their community.