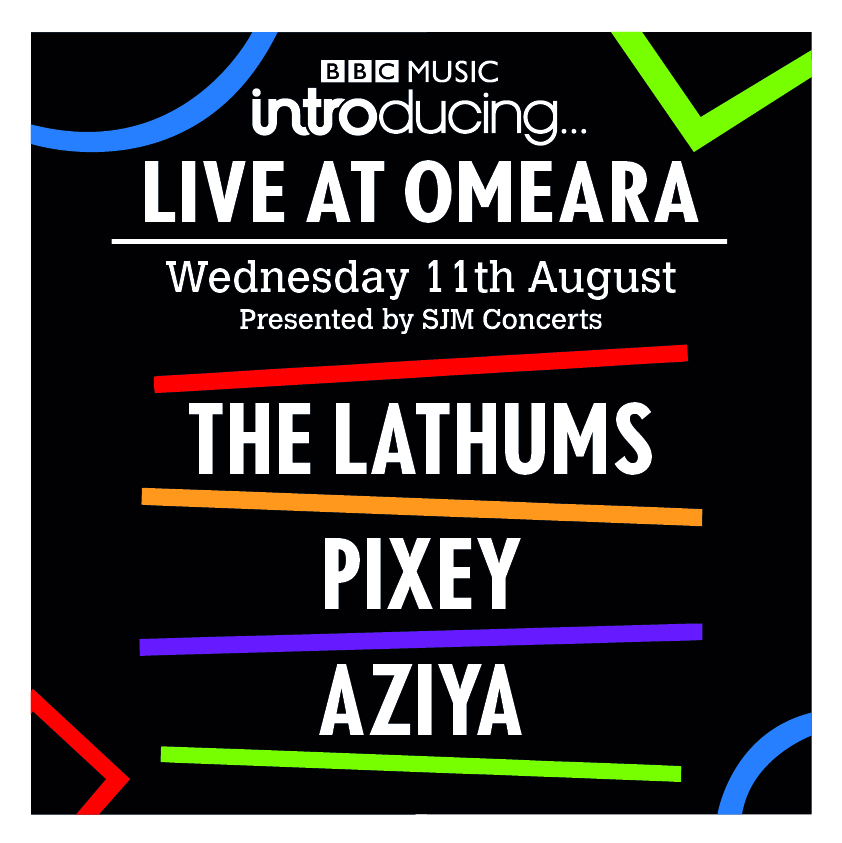 BBC Introducing returns this August with a stellar line up. This time, London Omeara plays host, welcoming three new artists breaking through in their field. THE LATHUMS, PIXEY AND AZIYA will all perform on Wednesday 11th August.

THE LATHUMS
Feelings of devotion, admiration and unbending loyalty are the feelings of love and, for BBC Sound Poll-shortlisted four-piece, The Lathums, love is a two-way street. Driven by the pure flow of euphoric pop, laced with intricate, dewdrop guitar lines, shoulder-bop-beats and the voice of an angel, The Lathums and their devoted following have lit a fire under the British live music scene and the long-time-coming resurgence of streetwise indie. Gently and ably led by singer-songwriter, Alex Moore, a 21-year-old with a soul slow-aged by books and life’s unpredictable turns, fans have rushed and held tight to The Lathums’ tall tales of romance in the ranks of the French Resistance, mythical villains and Gen-Z survival amidst the tumbling waves of a digital age. Nimbly swerving the wreckage of 2020’s cancellations by releasing their Top 20 vinyl-only EP compilation, The Memories We Make, live streaming a now legendary Blackpool Tower show and debuting on BBC’s Later… With Jools Holland, The Lathums remain determinedly on the rise.

PIXEY
Pixey grew up in the sleepy but picturesque village of Parbold, Lancashire before moving to Liverpool for school and remaining there to this day. Now signed to Chess Club – a label famed for breaking new talent, where recent exciting signings include Alfie Templeman and Phoebe Green, and past successes include Jungle, Wolf Alice and Easy Life – Pixey is making more waves than ever before. ‘Just Move’ drew attention from BBC Radio 1 DJs Jack Saunders (who made Pixey one of his Next Wave artists) and Huw Stephens amongst many other admirers like Radio X’s John Kennedy who added Pixey to the X-Posure playlist at the station in October 2020. Pixey has also featured as the cover artist of Spotify’s Indie Brandneu (GER) and Peach editorial playlists, racking up over 1 million spins in the process, and was amongst the artists named in major annual tips lists, the Dork HYPE List and the NME 100.

AZIYA
21-year-old London artist Aziya is determined to cement herself as a musical all-rounder. Picking up a guitar aged 10 and beginning to write her own music shortly after, she’s spent the time since then honing her craft, learning to produce and becoming a force to be reckoned with – both vocally and on her instrument.

Having posted a series of covers online throughout 2020, her talents have already been recognised by Grimes – who reposted Aziya’s version of ‘Oblivion’ – and US megastar H.E.R, who invited the young artist to perform on her Instagram live, where she ended up playing to an online audience including Missy Elliot and Shawn Mendes. However, inspired by a set of strong-minded musical heroes including Patti Smith, Tame Impala and Prince, now she’s finally released her debut EP ‘We Speak of Tides’, seeing praise from the likes of NME (who gave it a 4* review) Radio 1 (which saw Aziya’s single ‘Blood’ Jack Saunders’ Next Wave and BBC Introducing ‘Track of the Week’), as well as support from i-D, Vogue, Fader and The Guardian Guide (who made ‘Blood’ their Single of the Week).