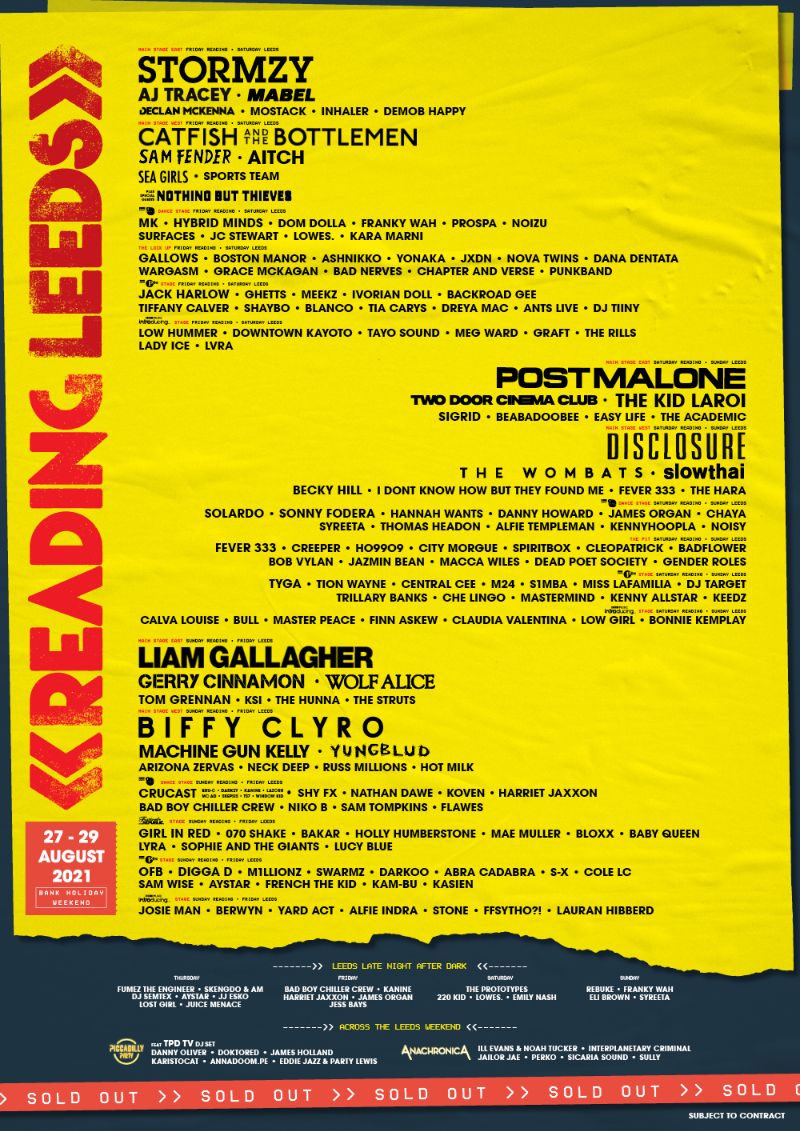 Reading & Leeds Festivals today reveal over 30 new artists and DJs to play the summer bank holiday festivals, and are excited to announce Biffy Clyro will be joining this year’s bill as latest headliner, returning to the festivals for their third headline performance. Inhaler, Russ Millions and Holly Humberstone will also play at the famous Richfield Avenue and Bramham Park sites this August bank holiday weekend (28-30 August). Additionally, both the BBC Music Introducing Stage and Late Night Leeds line-ups have also been announced.

These new additions will be joining the twin-stage headliners Liam Gallagher, Disclosure, Catfish & The Bottlemen, Post Malone and Stormzy.

Since making their debut at Reading and Leeds Festivals way back in 2002, Brit-Nominated Biffy Clyro return to this year’s festival as the final headliner. The Scot rockers will be taking the place of Queens of the Stone Age, who, due to restrictions and logistics, sadly are unable to perform at the festival. Simon, Ben and James last headlined in 2017 and will be performing hits from across their incredible career including tracks from their latest No.1 album A Celebration Of Endings. The band are very happy to return: “We are delighted and honoured to be headlining Reading & Leeds for a third time. We cannot wait to get out there and play for you all again after such a tough year… It’s gonna fuck!!”

Making their debut at the festivals this year will be Dublin four-piece Inhaler. With their debut album It Won’t Always Be Like This rocketing to the top of the album charts, these lads are set to be the ones to watch as future headliners.

London rapper and songwriter Russ Millions will be bringing his own style of hip hop to the festivals and will undoubtedly perform his Tik Tok dance challenge-inducing #1 Platinum-selling single Body. He can’t wait to get back out there to perform: “I’m excited to be reunited with my supporters again at R&L, let’s turn up!”

Emerging from the pandemic gleaming, Holly Humberstone is one of the biggest breakthrough UK pop acts of 2021. Less than a year since the release of her debut EP, her dark, wonky, electric pop with brutally honest lyrics has gained over 100 million streams worldwide, all recorded from her bedroom in Grantham.

Born and raised in Camden Town but rapidly achieving global recognition, Bakar is set to bring his fresh carefree sound to Reading and Leeds this summer. Refusing to be defined by genre, his sound effortlessly dances the line between indie and rap. HIs soulful offering ‘Hell N Back’ has garnered over 87 million Spotify streams.

South London’s Blanco, at just 21 has already made his mark on the UK rap scene, breaking out as a key member of ‘drill dynasty’ Harlem Spartan. Refusing to limit himself, Blanco embraces versatility from Drill rap to Brazilian paired with complex metaphors and cheeky references produce his individual sound, which he is set to bring for an electric set at Reading and Leeds.

Positioned at the unique intersection between metal and hip-hop, Dana Dentata, is a force to be reconned with. Crafting empowering, feminist, industrial, metal-dripping rap, her shock-rock performance art isn’t one to be missed over the festival’s weekends.

Hailing from Dublin, Chaya, is a multi-instrumentalist with classical training, growing up on exclusively classical music until New York City’s underground scene introduced him to the vibrant world of electronic. His diverse influences collide to produce a truly individual sound, often embodying classic UK Garage elements married with classical undercurrents.

Jazmin Bean is a complex and intense enigma, who will be showcasing their intoxicating mix of Alt Metal Electropop to The Pit Stage. Unapologetically impossible to define, Jazmin radiates an empowering sense of individualism, self-integrity, and independence. They embody the spirit of the Gen Z’s vibrant unorthodox subculture.

Indie-Punk three piece from Brighton, Gender Roles follow a whirlwind 2019 full to the brim with a triumphant BBC Radio 1 Maida Vale session with Annie Mac and riotous sell-out headline shows. The trio bombard the stage with charged-up, hazy guitars and a whole lot of chaotic fun.

Born out of sheer “boredom with the state of music at the moment” Punkband, bring pure attitude, punk and swagger to all their raucous tracks. They channel the youth of Britain’s disinterest and disgust in post-punk Britain paired with gritty, unpolished instrumentals.

Also announced today is female rap phenomenon Trillary Banks, who will be set to deliver a captivatingly raw blend of Rap and Dancehall culminating in contagious summer sounds. Trailblazing for women in the UK music landscape, she debuted her ‘FIRE IN THE BOOTH’ freestyle with Charlie Sloth, a rite of passage for any rapper but all the more valuable for female representation.

Essex Golden Boy French The Kid, naturally blends a resonant mix of English and French melodics, aided by growing up in the South-West of France. His bars share deep introspection, tackling mental health, his gritty past as well as looking ahead to the bright future.

Championing a unique style of conscious rap, Kam-Bu, uses his fast-paced, bass-leaden bars to share contemplative stories, stirring up the London scene. He takes aim at urgent political issues from Grenfell to institutional racism, as well as themes on the Black culture and the environment. Smoothly oscillating from party anthems into poignant lyricism, he is not one to be missed.

The BBC Music Introducing Stage will be showcasing the best up and coming talent from across the UK at Reading and Leeds Festival, with artists such as Radio 1 Live Lounge Introducing winner Bonnie Kemplay, Berwyn, who made the BBC Music Sound Of 2021 list, The Rap Game’s Lady Ice and Graft as well as Kent starlet Josie Man, Somerset singer songwriter Finn Askew, Leeds post-punk rockers Yard Act, electronic rising star Meg Ward, South London rapper Master Peace and many more.

Sadly, due to various restrictions and logistics, a few artists are now no longer able to perform at the festivals. This includes Queens of the Stone Age, Madison Beer, Denzel Curry, Sofi Tukker, Super Whatevr, Wallows, Oliver Tree, Tate McRae, MizorMac and Nation of Language.

For those heading to Bramham Park, the Leeds site will again be welcoming a full timetable of after-hours events at Late Night Leeds from Thursday night with DJs and performers taking to the three stages, Anachronica, a new dance stage, and of course the legendary Picadilly Party, to keep festival goers partying until the early hours. With a brand new, audio-visual experience stage, among the line-up on the dance stage will be DJ Semtex, Bad Boy Chiller Crew, Fumez The Engineer, Hariett Jaxxon and chart-toper 220 Kid. This year the Anachronica stage is focusing on all things in the forefront of UK dance music. DJs who are pushing the limits and pioneering in Jungle, Garage and Dubstep will be stepping up into the Mad Max-esque world of Anachronica, skillfully salvaged and adapted to blast out some of the biggest tunes late into the night.

More information to be released in the next few weeks will include the artists appearing on the Alternative Stage and the various food and drinks on offer.

Fans can be the first to hear further line-up announcements, artist news and much more by signing up to the newsletters at www.readingfestival.com and www.leedsfestival.com or staying in tune on social media.
FURTHER INFORMATION