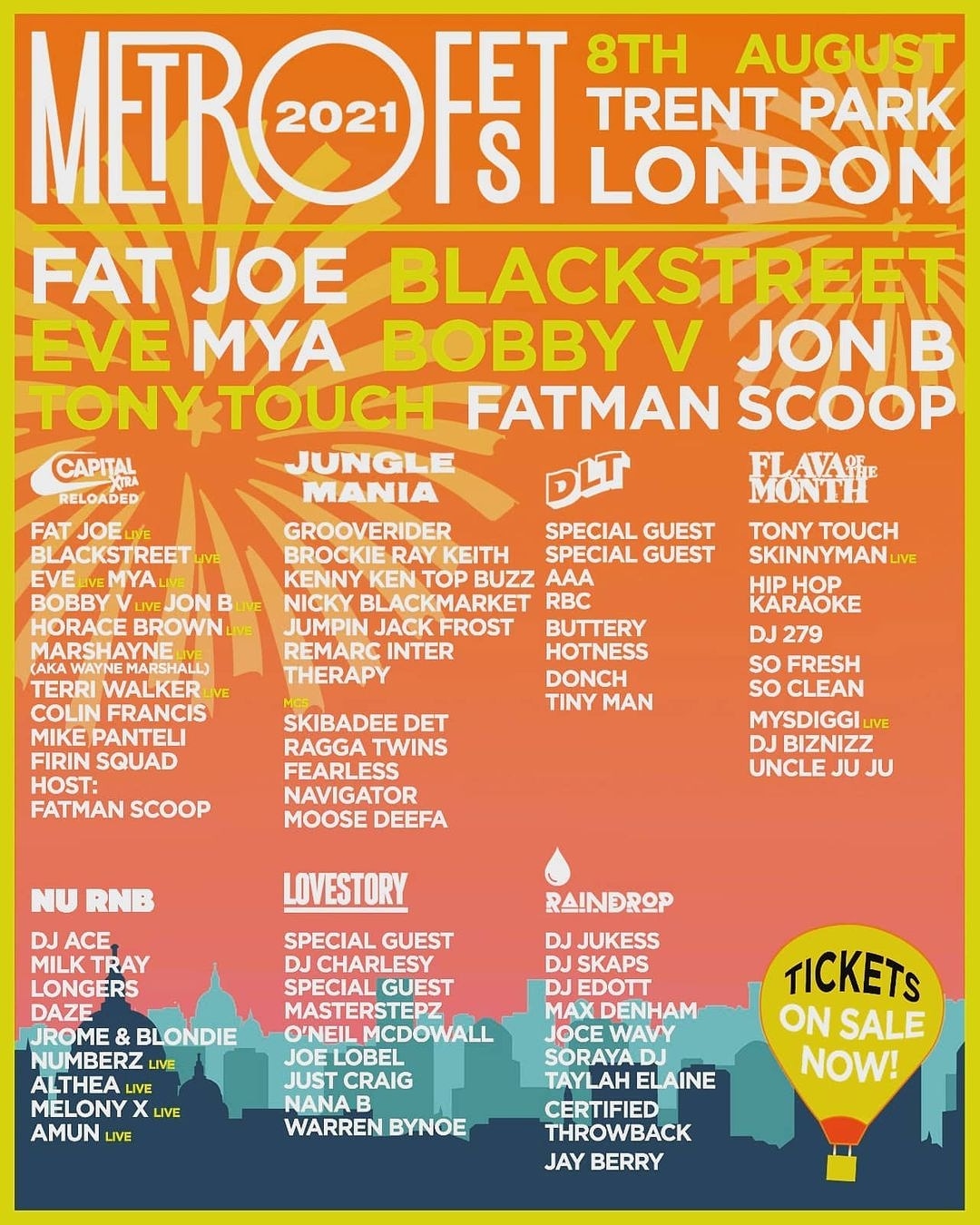 On Sunday 8th August 2021 MetroFest kicked off at the beautiful Trent Country Park in
North London. This groundbreaking inaugural retro Hip-Hop & RnB festival brought you
some of the World’s hottest DJ’s and iconic artists across seven incredible stages.

Unfortunately, due to circumstances beyond our control, two of the American artists
scheduled to appear on the main stage, Blackstreet and Mya, refused to perform at
Metrofest for their loyal fans who bought tickets for the event.

It has come to our attention that Blackstreet has released an 18-minute video on their social
media accounts with many false and potentially libellous accusations about the promoters of
Metrofest. We wish to dispel these false accusations by communicating to ticket holders the
facts and being completely transparent.

Blackstreet was fully paid for their set at Metrofest, as were Mya but refused to leave their
hotel, citing their PCR test results were unavailable. The team from Metrofest sent the PCR
results to both artists; however, they refused to acknowledge receipt.

In advance of the event, Blackstreet had told Metrofest that five of the travelling party of
seven had been vaccinated. However, this was false, and none of Blackstreet’s party had
actually been vaccinated. As a result, Blackstreet and its management refused to fly to the
UK unless all seven party members could travel simultaneously. Blackstreet’s request was at
an extra unbudgeted expense to Metrofest. Nevertheless, we undertook this request in
good faith to the artist, burdening us with unexpected costs for ground transport, per diems
and hotels.

In the leadup to Metrofest, Blackstreet refused to speak to the media in advance to the
event and backstage at the festival, unless all questions were vetted. This included our radio
partners and only wished to speak to a rival radio station. In addition, the group later refused
to do any press to promote the event, or post coverage citing Covid.

The accusation by Blackstreet that the group were not given per diems is false. To be clear,
Metrofest didn’t not renege on any contractual obligations towards Blackstreet, who weren’t
mistreated during their stay in London. All hotel, ground transportation, per diems and
production costs plus the artist performance fee were fully met by Metrofest. Blackstreet
also had received PCR test results and were all clear, as was Mya and these were fully paid
for by Metrofest.

Blackstreet and their management later refused to move from their hotel near Tower Bridge
to a Hilton hotel closer to the festival site 24 hours before the festival. Logistically this meant
a shorter travel time to the test centre and also to the festival site. Unfortunately, other
artists on the bill made us aware that the hotel wasn’t up to standard. When Metrofest was
made aware of this new hotel’s issues, we immediately placed the group and other artists in
their original hotel.

Blackstreet’s management refused to leave the hotel for their scheduled soundcheck on the
morning of the event. Later, the group and their management refused to take calls from the
Metrofest team throughout the day. Blackstreet released the video via social media during
the festival, saying they would not perform without actually informing us and using this
opportunity to promote their new album.

In addition, Mya also refused to perform, stating covid related concerns despite the
Metrofest team sending her the PCR test results three times. To be clear, Metrofest has
copies of all the artist test results in compliance with UK government regulations.

Due to the unprecedented times, the promoters of Metrofest were forced to circumvent
many issues. The Metrofest team worked tirelessly to deliver this inaugural festival to the
public in 2021 after our debut event was postponed by a year due to Covid regulations.

Metrofest sincerely apologises for the show’s late-running, which led to Bobby V set time
being cut short. Due to all of these above factors, including unseasonal weather and
unforeseen artist travel logistics. Metrofest as per TFL regulations, closed the perimeters of
the Trent Country Park, this affected traffic coming into the park, delaying performers
appearing as scheduled for the festival.

A special thanks to all of the legendary artists that joined us on the Metrofest stage from
the United States to perform for their loyal fans. Thanks to Bobby V, Jon B, Horace Brown,
Fatman Scoop and our headliner Fat Joe who performed in the UK for the very first time.
Metrofest wants to thank all fans who attended this historic first event and look out for
Metrofest 2022.