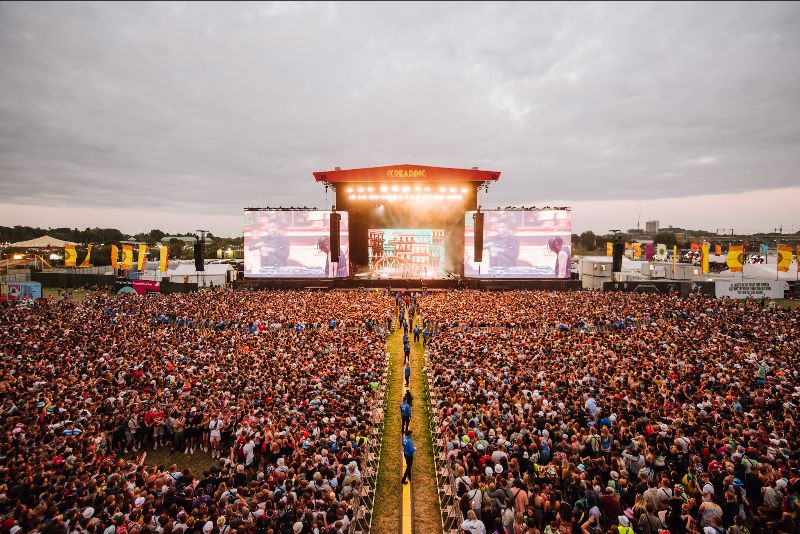 The UK’s biggest music festival of 2021, Reading & Leeds Festival, has welcomed over 200K music fans to the iconic Richfield Avenue, Reading and Bramham Park, Leeds sites to see their favourite artists play across not one, but two main stages – a new addition to the festival site to showcase its epic 2021 line-up, which consisted of six headline acts, Stormzy, Liam Gallagher, Biffy Clyro, Post Malone, Disclosure, and Catfish and the Bottlemen.

The arrival of dual main stages, Main Stage East and Main Stage West, welcomed a whole host of music talent, kicking off with indie guitars from The Academic, Newcastle’s grungers Demob Happy, alt rockers The Hara, fan favourites Nothing But Thieves, glam rock from The Struts and emo power pop duo Hot Milk to open the stages across the weekend.

Ireland’s exciting new indie sensations Inhaler brought their recent number one album It Won’t Always Be Like This to the stage during their debut main stage performance, bringing a healthy dose of bouncing indie disco to the crowd, whilst RnB starlet Mabel‘s energetic set of pop bangers from her back catalogue of hits, plus the first live showing of latest single ‘Let Them Know’, was accompanied by six choreographed dancers against a giant silver ‘M’ dazzling her fans. Renowned for a chaotic live performance, Sports Team delivered an exhilarating show featuring crowd surfing, circle pits, and a custom blimp. Manchester rapper Aitch drew a jam-packed crowd of fans eagerly anticipating his bolshy rhymes and cheeky demeanour, whilst also being joined by pal, fellow British rap star AJ Tracey, before returning the favour in AJ’s spectacular and glitzy performance, which featured a giant basketball hoop and dancing cheerleaders.

Singer songwriter Becky Hill delivered a rousing selection of her dance pop chart smashers, even signing a fan’s chest mid set at her Reading set. Recalling memories of his first Leeds Festival as an adolescent, much loved Geordie Sam Fender entertained fans with his emotionally powered lyrics, even at one point forming what looked like a heart shaped moshpit amongst his dedicated followers. Leading his crowd into rebellious chants, Northampton rapper Slowthai snarled through a punk fuelled set, whilst Reading & Leeds’ favourites The Wombats returned to delight the festivals’ fans with their anthemic crowd pleasers and Two Door Cinema Club‘s slick mix of electro pop rock started the disco.

Wolf Alice returned to the stages wowing the crowd with a set to be remembered for the ages. Fans were left mesmerised as the band played hits such as ‘Smile’ and ‘Don’t Delete The Kisses’. Lead singer Ellie Rowsell gave a beautiful vocal performance worthy of Reading & Leeds Festival. Festival fans were delighted Blossoms had been added to the 2021 line-up, and the Stockport indie five piece gave the crowd exactly what they were after, with a set full of their sing-a-long hits, their stylish disco swagger, and some new material. Gen-Z’s punk rock hero Yungblud set the crowd alight with his anarchistic set, featuring a giant-sized inflatable duck with horns and a livestreamed appearance from Machine Gun Kelly. Dominic Harrison gave a liberating and compassionate performance, with punk power a plenty. Scottish sensation Gerry Cinnamon brought his distinct folk style to the festivals, as the crowd were pulled further into every song as the set progressed.

Renowned for an epic live show, headliner Stormzy‘s festival return didn’t disappoint as the showman enthralled music fans with a triumphant, visually dynamic, and highly momentous performance. Studded with pyrotechnics, an elevated platform of dancers, and appearances from fellow grime superstar Dave in Reading and football superstar Jack Grealish in Leeds, Stormzy continues his reign as a legendary and genre defining festival leader.

Fellow headliners, sibling dance duo Disclosure brought their cutting-edge show to the festival for the fourth time, filled with dancefloor anthems to get the rave going. The brothers were joined by the South London Samba collective, and a brass section, elevating their live performance to new levels.

Catfish & The Bottlemen returned to Reading & Leeds to headline with a ferocious, hit-filled set of rock and roll that enforced their status as one of the UK’s biggest guitar bands. Circle pits formed whilst the band stylishly moved through fan favourites from three albums of their stadium worthy material.

Texan superstar Post Malone headlined the festival for the third time with a bang. A spectacular show featuring his iconic blend of hip hop, rap, rock and emo, ended with Posty’s ritual of smashing his guitar on stage.

Scottish rockers Biffy Clyro also returned to headline Reading & Leeds once again, performing anthemic hits from across their career and tracks from their latest album to the delight of their loyal fans.

Legendary headliner Liam Gallagher played tracks from his solo albums along with a plethora of Oasis standards. Emotions ran high as Liam paid tribute to the recently departed Rolling Stones drummer Charlie Watts as he dedicated Live Forever to him, with England football star Declan Rice enjoying the show.

Over on the BBC Radio 1 Dance Stage, the furious beat of bass kept festival goers moving all weekend long. Hannah Wants brought her bumping house beats to the booth while duo Solardo did their native Manchester proud with a slick selection of summer-ready bangers. MK, meanwhile, gave a masterclass in mixing as he closed out the dance stage with back-to-back tunes which lit up the night.

Offering a change of pace from the wealth of musical talent on show, the ALTERNATIVE STAGE played host to an unrivalled bill of comic masters. Alongside TV stalwarts such as Milton Jones, Never Mind the Buzzcocks star Simon Amstell and Reginald D Hunter, Katherine Ryan had crowds rolling with laughter at her signature sarcasm and piercing wit.

BBC Radio 1XTRA stage saw heavy footfall with its bumper line-up of genre breakers and chart-topping stars. Once a viral YouTube star, Drill royalty Ivorian Doll looked perfectly at ease on stage as she whipped up the crowd with her impeccable flow while the likes of m1llionz and Digga D showed off their lyrical prowess and potent beats which enthralled fans throughout the entire weekend with their infectious energy. Finally, the closing pair of Ghetts and Jack Harlow, who made his first-ever UK festival debut this weekend, showcased two true titans from either side of the Atlantic at the top of their game.

The eclectic artists featured on The Pit and Lock Up stages were one of the genuine highlights of the festival. From the punk-powered sounds of Bob Vylan and Ashnikko’s transfixing blend of electronica and rap – where she was even joined on stage by a giant red and blue vulva – to Houston heroes Waterparks, attendees were treated to a broad range of emerging talent and next-gen stars. Cranking the amps, Don Broco rocked the very foundation of the tent while dynamite duo WARGASM gave memorable performance set at a blistering, break-neck speed.

Continuing to champion rising stars and hotly-tipped talent, the BBC Music Introducing stage remained the go-to place to catch all the newest music. In Reading, a surprise set from PA Salieu, winner of the BBC’s Sound of 2021 drew a vibrant, buzzing crowd. Elsewhere throughout the weekend, artists such as Maisie Williams, Yard Act and Finn Askew proved definitively why they’re ones to watch closely.

Other surprise sets across the weekend included an explosive performance from Frank Carter & The Rattlesnakes in Reading at the Lock Up stage, whilst alternative R&B group Easy Life played two sets on Sunday in Leeds, which included a secret performance. Continuing the surprise sets in Leeds were Alfie Templeman and Jake Bugg, with Maisie Peters and Larry Pink The Human in Reading.

Over at the Festival Republic stage, fans were delighted with the sudden announcement of Jake Bugg’s secret set full of his sing-a-long hits. The weekend also saw the grungy yet tender overtones of Holly Humberstone pull an eager crowd along with girl in red‘s dreamy bedroom pop, stage-opening sensation Blondes and the feel-good Baby Queen.

In light of the recent Covid-19 pandemic, the festival ensured attendees adhered to strict entry requirements, with all ticket holders being required to present proof of a full vaccination, or proof of a negative NHS Lateral Flow Test taken prior to travel on the day of arrival at the festival, or proof of natural immunity.

In a showing of support for the NHS vaccination programme, Reading & Leeds also partnered with the NHS to offer Covid vaccinations at pop-up clinics on site throughout the weekend. Immediately after closing his main stage set, Declan McKenna went to the Covid Vaccine tent to receive his second jab, watched by members of the press and of course, his fans.