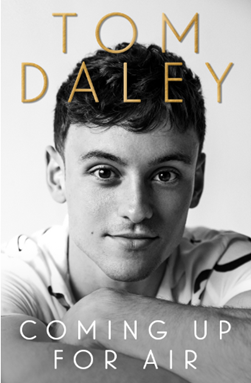 After his unforgettable medal-winning performance at Tokyo 2020, Olympic champion Tom Daley has announced an event to launch his upcoming autobiography Coming Up for Air. The event will take place on Tuesday 12th October at the historic Cadogan Hall in London. Tickets for the show go onsale Friday 27th August at 10am via www.gigsandtours.com / www.ticketmaster.co.uk.

From his knitting to his moving medal wins, Tom Daley has captured the heart of the nation. Competing at his fourth Olympics this summer, Tom was crowned Olympic Champion in the Men’s synchronised diving before earning a Bronze in the individual 10m platform, making him the most decorated British diver of all time.

Over the years, we have watched Tom go from strength to strength professionally, gathering record-breaking achievements and countless awards along the way. But we have also seen him grow into the man he’s become today: a husband, a father and a role model.

In Coming Up for Air, Tom explores the moments and experiences that have shaped him. With each chapter, he reveals a lesson learned along the way, from the resilience he developed competing at world-class level, to the courage he discovered while reclaiming the narrative around his sexuality, and the perspective that family life has brought him.

Warm, honest and perceptive, Coming Up for Air offers a unique insight into the life and mindset of one our greatest and most-loved athletes. The event will give fans the chance to hear Tom speak candidly about his book and his incredible career so far.

Tom Daley’s Coming up for Air – Book Event
Tuesday 12th October
London Cadogan Hall
On sale 27th August at 10am
Ticket price: £35 + BF, including a copy of Coming Up for Air