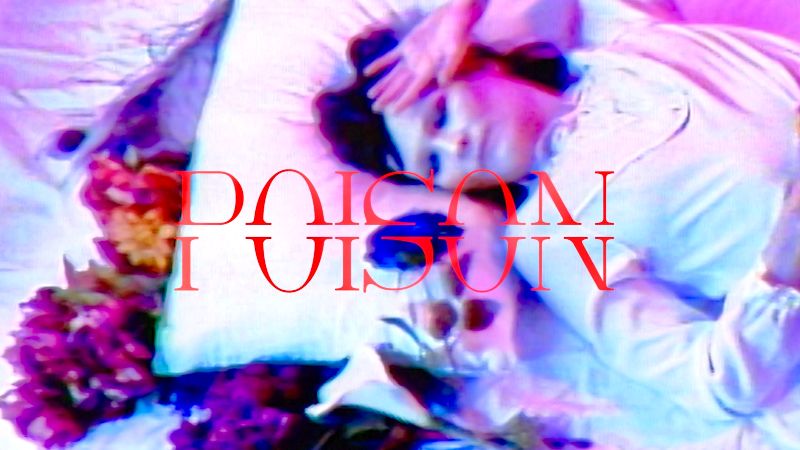 East Coast minimal wave duo Xeno & Oaklander have shared a new single from their seventh full-length album, ‘Vi/deo’, which is set for release on October 22nd release on Dais Records.

The album further distils their iconic noir synth pop into a streamlined suite of gleaming, graceful retrofuturism. Inspired by ideas of synaesthesia, scent, star worship, and obsolescent technologies, the duo of Liz Wendelbo and Sean McBride began conceiving the blueprint of ‘Vi/deo’ while sequestered at their Southern Connecticut home studio during the pandemic. The context of isolation, streaming, and remote dreaming seeped into their chemistry, manifesting as both homage to and meditation on a certain cinematic strain of technicolour fantasy: the screen as stage, distance disguised as intimacy, where tragedy and glamor crossfade into one.

Following the melancholic pop gem “Infinite Sadness,” new single “Poison” shudders and echoes with dramatic 80’s syncopated disco glam. “We were dying to make a horror film in the style of Suspiria, and we wanted it to look like a VHS tape from the video store” Wendelbo comments on the accompanying video. “Poison has an Italo Disco feel to it and co-directing with Scott Kiernan felt like the perfect match”

Set for release on October 22nd via Dais Records (pre-order here), ‘Vi/deo’ captures the bittersweet beauty of youth and utopias, the wistful transformation from miracle to memory, where love turns unreal and music becomes myth: “Sounds of the underground / Will echo in future days / Feelings of misery / Will fade into the haze.”

The album marks a peak fluidity between the pair’s fusion of analogue electronics and poetic melody, both refined and oblique, classic but contemporary. Wendelbo modelled her singing on “a young boy in a choir,” alternately holding notes and whispering them, with the lyrics clear, the voice elevated. McBride’s synthesizers serve as the perfect counterpart, tiered and polished, threading fluorescent architectures of a lost audio-visual age. Theirs is a darkwave of reverie and flickering city lights, swooning and sleek, romantic anthems for concrete bohemia, cigarette smoke in rainy gardens, and sound as colour (“blue is fast and red is slow”).

Xeno & Oaklander are a minimal electronics duo (Liz Wendelbo and Sean McBride of Martial Canterel) based in Brooklyn, New York. As artists, they have been deeply involved in the analog synth community since 2004 (the release of their debut Vigils LP on Xanten), and have helped promote and inspire the revival of synth wave and the rise of dark wave in the US and throughout the world through their extensive touring and prolific output.
Following their debut on Xanten, they released the Sentinelle and Sets & Lights albums on Wierd before signing on to Ghostly, where they unveiled their widely acclaimed albums Par Avion and Topiary, introducing their innovative mastery of analog synth production to a wider audience. During the Ghostly album sessions, the duo also recorded Movements and Movements 2 commissioned by the National Center for the Arts, Grenoble, and Ecole du Magasin: an inspirational 35 minute piece recorded live and inspired by travel in space and time. 2017 saw their most recent effort, the Moonlight single on Ghostly, originally released as a split single with Chris und Tina by Electronic Sound Magazine UK. They released their ‘HYPNOS’ album on DAIS in 2019.

Xeno & Oaklander record their songs and film scores in their Brooklyn studio and are known for their commitment to recording and performing on analogue synthesizers exclusively. During Covid they relocated their studio to Connecticut. They perform both at art institutions, music venues and festivals worldwide, and have performed at SF Moma, PS1 Warm Up, Miami Art Basel, Kunsthalle Zürich & the New Museum NY with sold out shows at Echoplex LA, Elsewhere NY & El Club Detroit. Festivals include SUBSTANCE LA & CMD Mexico City. They’ve appeared on numerous live streams and NIGHT FLIGHT TV. Sean McBride has created original music for visual artists Dara Birnbaum, Lucy McKenzie & Richard Kern. Their latest remixes are for Tobias Bernstrup and Robert Calvert of Hawkwind.