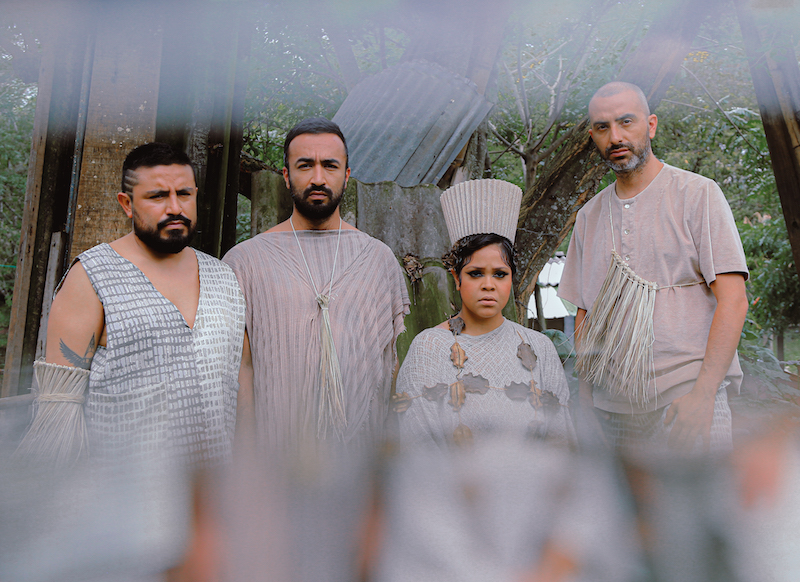 Based in New York City, today we’re excited to introduce you to Latinx quartet Combo Chimbita who have just released a new track today titled “Memoria” via ANTI-. Between echoing synths and intricate cumbia dub rhythms, the song draws a connection between the many stages of evolution throughout life. In the song’s new video, multidisciplinary artist Helen Ceballos simultaneously emerges from the earth and pays homage to it.

“In these drifting times, where haste has become aesthetically appreciated, returning to the maternal memory of our earth is a key and infallible route,” said Ceballos. “Embodying this performance affirmed the certainty that a path towards building collectively should always invite us to search from within. I give thanks to the visionary team for provoking our encounter and to Combo Chimbita for summoning music that invites us to review what is essential.”

“Building a bridge between Combo Chimbita’s mystical exploration of memory and Helen Ceballos’ performance art was an organic weaving of the minds,” Diaz explained. “They challenge us to reexamine the relationships we cultivate between our bodies, the lands we inhabit, and the radiating energy of deep ancestral roots that connect us all. Visually and sonically, we reveal the distinct transformations we encounter through life while navigating the tenderness, grief, and resilience of one’s metamorphosis.”

“”Memoria” is, without a doubt, a song that narrates a moment from my childhood: the passing of my grandfather, an important figure in my life who propelled me to sing,” lead vocalist Carolina Oliveras added. “That moment breathes into this track’s rhythms and loops, a melancholic moment that repeats itself into my memory and evokes the ephemeral nature of life.”

The legend begins with their first EP, 2016’s El Corredor del Jaguar, and followed up with the occult psychedelia of Abya Yala. In 2019’s Ahomale, the New York-by-way-of-Colombia troupe fuse the perennial rhythms of the Afro-Latinx diaspora with a modern-day consciousness, while tracing the prophetic traditions of their ancestry. More will come from Combo Chimbata later this year too.