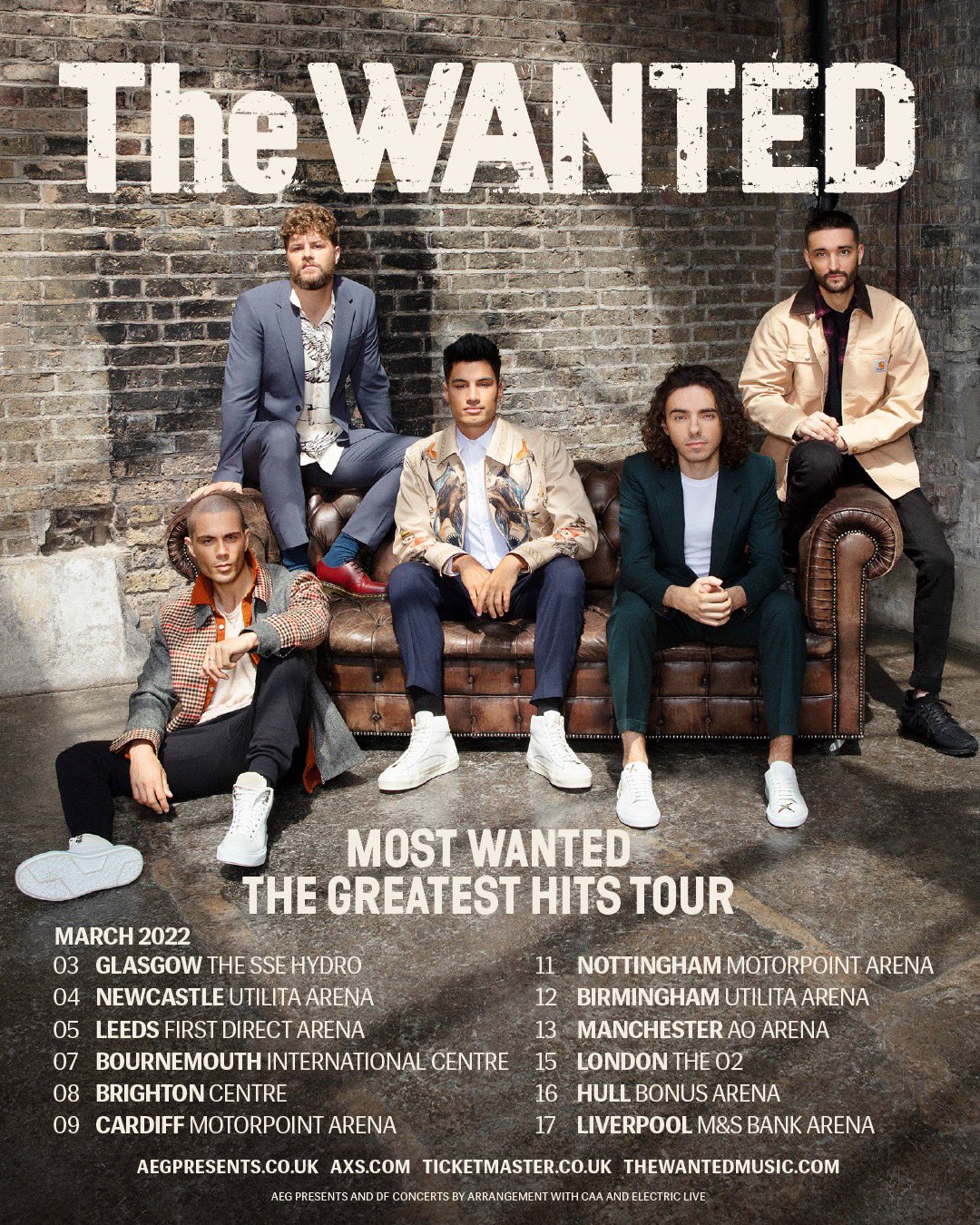 The Wanted, who have just announced that they are back together again after a seven year hiatus and will be releasing their greatest hits album ‘Most Wanted– The Greatest Hits’  on November 12th, announce a special 12 -date Arena tour of the UK in March 2022.

‘Most Wanted – The Greatest Tour’ takes in many of the UK’s biggest cities and will give fans a chance to hear all their favourites live for the first time in 7 years. The tour kicks off at the SSE Hydro in Glasgow March 3rd 2022 and finishes at the M&S Bank in Liverpool on March 17th.

At the boys press conference earlier this week the band also revealed that they will perform together for the first time in seven years at Tom Parker’s charity concert for Stand Up To Cancer ‘Inside My Head’ at the Royal Albert Hall on September 20th.

GET PRIORITY ACCESS TO THE UPCOMING 2022 UK TOUR HERE

*Pre-order the brand new album ‘Most Wanted: The Greatest Hits’ by The Wanted via the official store before 12pm BST on Tuesday 14th September, to get exclusive access to the pre-sale for the chance to purchase tickets to The Wanted’ s 2022 UK tour.

You will receive your unique pre-sale access code + link to pre-sale in the order confirmation email.

Pre-sale tickets will be offered on a first come first served basis.

The full list of dates for the Most Wanted – The Greatest Hits Tour is as follows:

‘Most Wanted-The Greatest Hits’ is a collection of all the bands huge worldwide hits, many of which written by the lads themselves. The bands catalogue contains pop masterpieces including the Number 1 Singles ‘All Time Low’ and ‘Glad You Came’, the 2010 Comic Relief single ‘Gold Forever’, the theme song from the 2012 movie’Ice Age: Continental Drift’, ‘Chasing The Sun’ and the soaring ballad ‘Heart Vacancy’. The collection also includes the hits ‘Lightning’, ‘Lose my Mind’, ‘We Own The Night’, ‘Walks Like Rihanna’, ‘I Found You’, ‘Warzone’, ‘Show Me Love’ and the fan favourite ‘Could This Be Love’.

The Wanted first discussed getting back together in early 2020 to celebrate their 10thanniversary but the global pandemic got in the way. Then came the devastating and shocking news that one of the boys, Tom Parker, had been diagnosed with a brain tumour. Tom, in his characteristically no-nonsense manner, decided to turn a personal tragedy into something more positive and set out to make a documentary for Channel 4 and Stand Up To Cancer titled ‘Tom Parker – Inside My Head’ both to raise awareness of the tell-tale signs of the disease and to explore new treatments and research.

Having discovered during the course of filming that only 1% of the National Cancer research budget went to researching new treatments for brain tumours, Tom also decided to stage a huge pop concert at the world-famous Royal Albert Hall in London to raise crucial funding for more medical research. Tom made a call, a Zoom call of course, to the other four boys to initially ask them to reunite for the Royal Albert Hall show and then one conversation led to another and The Wanted reunion the fans had been clamouring for was on!

‘We have been talking off and on for a few years now about getting back together to do something for the anniversary but have all been working on other projects at different times so it didn’t happen. This is all about having fun with our mates, no pressure, just FUN’ says Jay McGuiness.

The Wanted are one of Britain’s biggest pop bands, living a dream that has far surpassed even their most optimistic expectations and all with their best mates at their side. With over 12 million record sales worldwide, the band have notched up 10 UK Top Ten singles and 2 UK Number 1 singles. The band today still boast almost 6 million monthly listeners on Spotify and have a huge worldwide following on their social media platforms.

During their first five years together The Wanted became serious pop players all across the world. With their ferociously infectious tunes, rock solid friendship and laddish charms, they stamped all over the typical boy band mould. The accolades followed accordingly: A ‘Best British Single’ Brit Award nomination for ‘All Time Low’ in February 2011 was followed by winning The Radio 1 Teen Award for ‘Best British Music Act’ and the American People’s Choice Award for ‘Favourite Breakout Artist’ in 2013. The boys played to sell-out crowds on two UK Arena tours and the ‘Word of Mouth’ World Tour across the UK and America, alongside show stopping perform​ances at Global Radio’s The Summertime Ball (4 years running) in front of 90,000 fans at Wembley Stadium, V Festival, T in the Park and the iTunes festival. The boys even carried the Olympic Torch on the torch relay for the London 2012 Olympics.

A deal with prestigious American label Def Jam in April 2011 took the boys global and led to huge live performances on some of the USA’s biggest TV shows including David Letterman, Ellen and Jimmy Fallon, as well as performing at huge live shows such as the Z100 Jingle Ball in New York, the prestigious Billboard Awards in 2012 and the world-renowned Macy’s Day Parade. The boys went on to star in their own US reality TV show ‘The Wanted Life’, executive produced by Ryan Seacrest for the E! Network.

Having gone their separate ways, the band all achieved success in their solo endeavours over the past few years. Tom, Nathan, Max and Siva all launching successful solo music and acting careers and Jay forging a successful career as a leading man on the West End stage and winning Strictly Come Dancing.