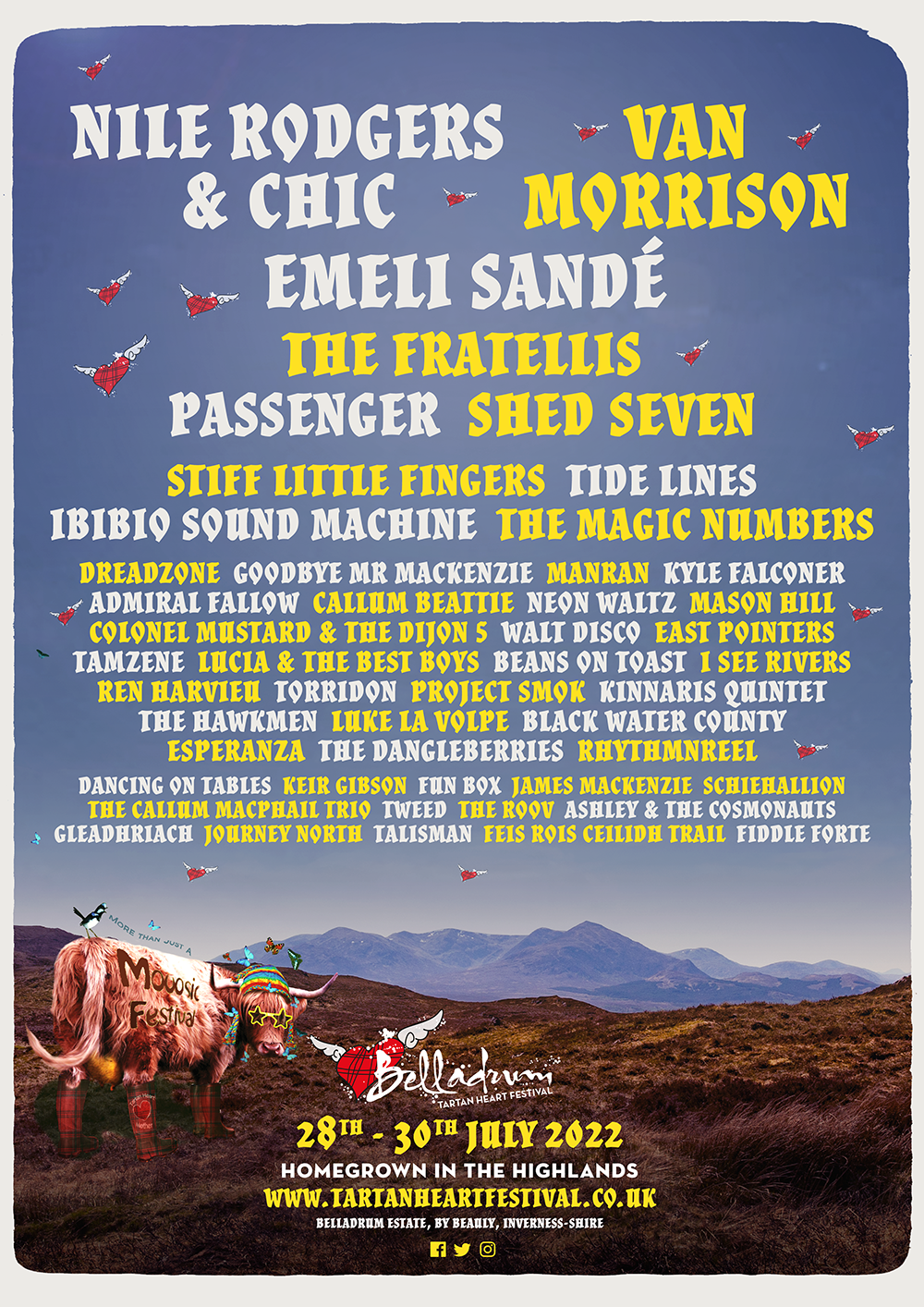 Following on from the cancellation of the Belladrum Tartan Heart Festival for two consecutive years in 2020 & 2021, ‘Bella’ can confirm today that it has managed to secure the majority of the previously announced line-up including all three headliners, legendary multi- Grammy Award winning composer, producer, arranger and guitarist NILE RODGERS & CHIC, another truly legendary figure in the music industry, the iconic singer-songwriter VAN MORRISON, and the Scottish artist with one of the most recognisable voices in pop, soul and R&B, EMELI SANDE.

As the co-founder of CHIC and the Chairman of the Songwriters Hall of Fame, Rodgers pioneered a musical language that generated chart-topping hits like “Le Freak,” (the biggest selling single in the history of Atlantic Records) and sparked the advent of hip-hop with “Good Times”. Nile transcends all styles of music across every generation with a body of work that’s garnered him inductions into the Rock & Roll Hall of Fame and the Songwriters Hall of Fame.

Born in Belfast in 1945 Northern Irish singer-songwriter VAN MORRISON has a vast collection of awards to his name including a knighthood, a Brit Award, an OBE, an Ivor Novello, six Grammys, and an entry into The Rock n Roll Hall of Fame. Over the course of his career his has penned some of the most memorable songs of the 20th century including the classic hits, ‘Brown Eyed Girl’, ‘Moondance’, ‘Jackie Wilson Said’ and ‘Gloria’. He is an artist who is a true legend in every sense of the word and his debut at Belladrum is set to be a standout moment in the festival’s history.

With over 340 million video views, 19 million singles sold including 3 Number One UK singles and over 6 million albums, EMELI SANDE has dominated the music industry and captured the heart of the nation. Her debut album ‘Our Version of Events’ released in 2012 was the biggest selling album of that year and this month featured in the official chart company’s top 10 albums of the decade. The Aberdonian has won numerous accolades including 4 Brit Awards (Critics Choice, Best Album and Female Solo twice, most recently in 2017 for her second album, ‘Long Live the Angels’ and in 2018 was awarded an MBE for services to Music.)

Alongside her solo career, EMELI SANDE regularly provided guest vocals for other artists including the huge hits ‘Read All About It’ (Professor Green), ‘Beneath Your Beautiful’ (Labrinth) and ‘What I Did for Love‘ (David Guetta). She also performed at both the opening and closing ceremonies of the London Olympics and at the White House for Barack Obama.

‘We were absolutely devastated when we had to cancel Bella for the second time earlier this year due to the COVID-19 pandemic, but are delighted that we have been able to re-book such an incredible line up of artists including all 3 headliners to appear at our delayed 17th outing next summer. We cannot wait to welcome everyone back to what is sure to be the biggest party in Belladrum history next summer!’ Dougie Brown, Event Producer

In further line-up announcements, Scottish Indie Rock band THE FRATELLIS will make their Belladrum debut. Their debut album ‘Costello Music’ released in 2006 led a Brit Award for British Breakthrough Act and included the anthemic singles ‘Chelsea Dagger’ and ‘Henrietta’. The band will release their sixth album ‘Half Drunk Under a Full Moon’ later this year.

SHED SEVEN will be making a very welcome return to the festival having last appeared way back in 2009! To date they have clocked up 15 top ten singles and 4 top ten albums, with standout tracks including, ‘Going for Gold’, ‘Chasing Rainbow‘ and ‘Disco Down‘. The release of their first album in sixteen years, 2017’s ‘Instant Pleasures‘ saw them cement their place as one of the UK’s most treasured bands.

PASSENGER has come a long way since the release of his first album, Wicked Man’s Rest, back in 2007. The initial incarnation, in which Rosenberg was backed by a full band, was followed by his reinvention as a solo artist and a period of busking, largely in Australia and New Zealand. Then came a year touring the world in support of Ed Sheeran. And then Let Her Go – followed, Rosenberg smiles, by ‘two years running round the world after that song’. He had to run fast: the song, for which Rosenberg won an Ivor Novello, has reached two billion plays on Youtube (18th highest ranked video of all time on the service) & over one billion plays on Spotify.

Belfast punk royalty STIFF LITTLE FINGERS make their Bella debut. Formed in 1977 the band, along with the likes of The Clash, Sex Pistols, The Damned, Buzzcocks, Sham 69, were there at the start of the punk rock movement and they are still going strong.

Scotland’s TIDE LINES join the bill, a band whose sound is a combination of Celtic soul, folk philosophy and big guitars with the voice of a Gaelic angel in singer and chief songwriter Robert Robertson. The band first emerged in the summer of 2016 with the release of their debut single, ‘Far Side of The World’ and have been an unstoppable force ever since.

2020 will see THE MAGIC NUMBERS celebrate 15 years since the release of their self-titled multi-platinum debut album. The album was nominated for a Mercury Prize in 2005 and included the standout singles, ‘Forever Lost’, and ‘Love Me Like You’.

Making an overdue and welcome return to Bella are British Electronic Dub act DREADZONE who will take to the Garden stage. An act who feel more like a Bella family member, COLONEL MUSTARD & THE DIJON FIVE will bring the party with Peace, Love & Mustard; Electronic Afro-Funk outfit IBIBIO SOUND MACHINE are set to make their Bella debut on the Garden Stage; multi-award winning Scottish Supergroup MÀNRAN are set to appear as is KYLE FALCONER frontman of Dundee’s THE VIEW.

Closing the Grassroots Stage on the Thursday night will be RYTHMNREEL; also appearing over the weekend are Highland singer-songwriter JAMES MACKENZIE; firm Bella favourites THE DANGLEBERRRIES; ESPERANZA the 9-piece ska collective from Glasgow; THE ROOV who provided the soundtrack to our official 2019 after-movie; the CALUM MACPHAIL TRIO, TWEED, SHIEHALLION, JOURNEY NORTH and one for the younger family members FUN BOX with lots more acts to be announced over the coming months.

Thanks to the overwhelming support of our customers rolling their tickets over, the majority of our 2022 Tickets are sold out. We do, however, have a small number of returns which will be going on sale at 11am, this Friday, 24th September. Tickets are available from our partner www.skiddle.com

Tickets are limited, with no further releases planned.

For our customers who purchased glamping tickets through Skiddle for Yurts and Squrts we will be in touch individually by email in the near future to discuss with you alternative packages for your glamping experience.

We know many of you will be wondering how this might affect your attendance at the 2022 event. We are starting conversations with our licensing authority and Scottish Government around vaccine passports and will of course, keep you all updated on how this progresses. Vaccine passports are likely to be written into our licensing conditions and we will work to the guidance set to us by our local authority.