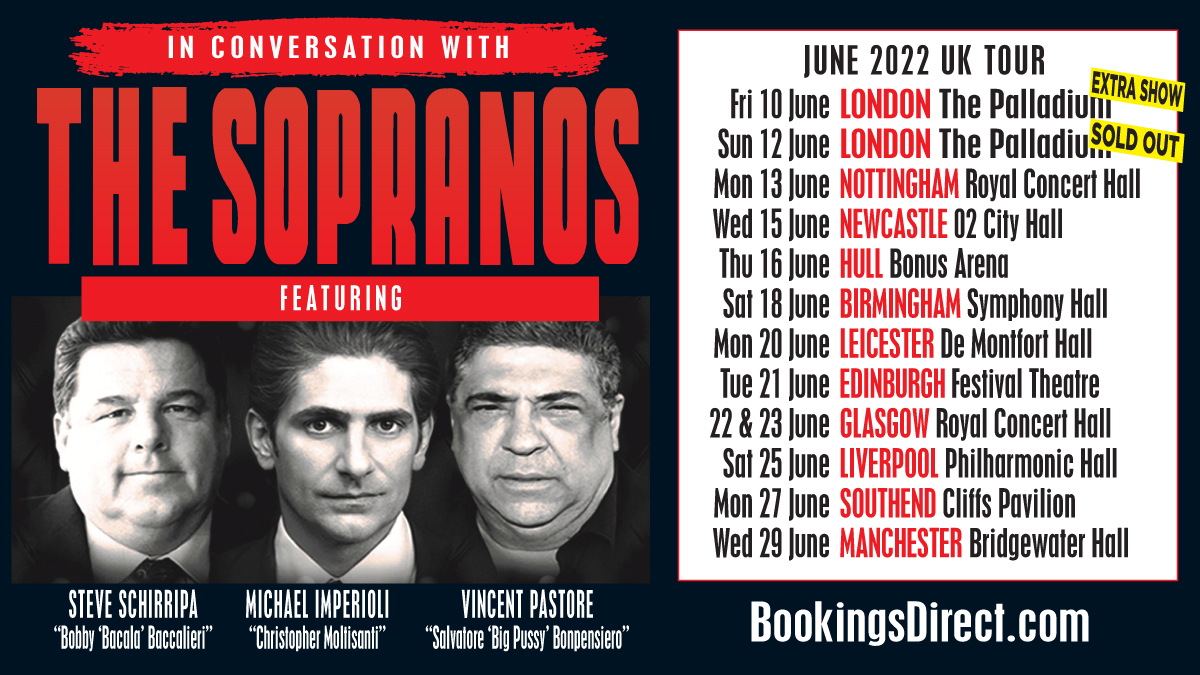 THE SOPRANOS 20TH ANNIVERSARY ‘IN CONVERSATION’ SHOWS CONFIRMED FOR 2022

To mark 20 years of The Sopranos, three of the biggest characters from the seminal hit show will visit the UK for a series of up close and personal ‘In Conversation’ style shows.

Iconic Mob Drama Stars Michael Imperioli (Christopher Moltisanti), Steven Schirripa (Bobby ‘Bacala’) & Vincent Pastore (‘Big Pussy’ Bonpensiero) were originally set to tour back in 2020 but the shows have been moved to June 2022 due to the pandemic.

Lockdown has only propelled the demand for The Sopranos with a huge surge of viewers. GQ called it the hottest show of 2020. In the UK, NOW TV reported a 122% increase in views of the title, and in the US, America HBO reported a 200% increase in viewers

Not only have long time fans returned to the mob drama for some serious comfort viewing, but also a growing legion of first-time viewers — including a massive swath of Gen-Zers with the New York Times recently asking  “Why Is Every Young Person in America Watching ‘The Sopranos’?

Such has been demand for the tour that and extra show has been added at the London Palladium on the 10th June 2022. Tickets go on sale for this show on Friday 8th October at 10am via BookingsDirect.com.  Tickets for all other 2022 shows are on sale now.

Michael Imperioli said, “I was so disappointed that we had to postpone our planned UK tour but I cannot wait to make it up to you”

Vincent Pastore added, “I can’t wait to finally get to the UK to meet our fans there…and answer any questions. See you next year”

Steve Schirripa concluded, “Watch out UK we are coming for you”.

In 1999 a guilt-ridden gangster walked into a psychiatrist’s office. What followed, over the course of eight years, 6 legendary series’ and 86 episodes was a TV revolution.

It’s hard to believe it’s been two decades since the world was introduced to Tony Soprano and his wild world of wise guys.  To this day, The Sopranos is universally hailed as the most groundbreaking series of all time.

Ranked by Rolling Stone as “the greatest TV show of all time” the show remains a prominent, powerful cultural force! The Guardian called it ‘the most masterful show ever’ and GQ said, “The reach, influence and breadth of The Sopranos can’t be overstated”.

David Chase’s uncompromising vision of gangland New Jersey was so successful and so culturally significant that it won a coveted 21 Primetime Emmy Awards and five Golden Globe Awards.  The shows fusion of cutting-edge, unpredictable writing and powerhouse acting has ensured The Sopranos remains a classic.

For the first time in the UK and to mark the show’s 20th anniversary, three of The Soprano’s biggest characters Steven Schirripa (Bobby ‘Bacala’), Michael Imperioli (Christopher Moltisanti) and Vincent Pastore (‘Big Pussy’ Bonpensiero) will take to the road for live shows.

The legendary trio will take fans behind the scenes of the lauded gangster drama—the stories, the dramas, the laughs—not to mention the countless theories about the show’s controversial finale. Fans will be given the opportunity to ask anything and everything they’ve ever wanted to know about the show.

The self-effacing wise-guy banter and mercurial story telling between these iconic actors will reveal a multitude of on and off-screen drama. A family on-set and off, they’ll take a deep dive into the relationships formed during the show’s eight-year run, and the impact that their on-screen capo, James Gandolfini, had on their careers and lives. There will also be an opportunity to join the trio backstage at the show with meet & greet packages available.

Playing a mobster on The Sopranos, was a tough business. Anybody could get whacked. One minute, your character is a trusted confidante of Mafia boss Tony Soprano. The next, you’re sleeping with the fishes.

Michael Imperioli’s performance as Christopher Moltisanti, an up-and-comer within the crime family, created one of the show’s longest lasting and most vivid characters. Imperioli won an Emmy for supporting actor for his role on the show.

One of the big shocks of the series was when Salvatore “Big Pussy” Bonpensiero played by Vincent Pastore got whacked for becoming an FBI informant in season one.

Bobby “Bacala” played by Steven Schirripa stood out as the shy, sweet-tempered soldier who took care of Uncle Junior, loved his model trains, and was averse to violence. In fact, Bobby managed to avoid the family’s brutal ways altogether until Tony vengefully forced him to commit his first murder in season six.

Nearly two decades after it faded to black in a Jersey diner with the jukebox playing “Don’t Stop Believin’,” The Sopranos remains the standard all ambitious TV aspires to meet. This is a unique one off opportunity to relive one of the most legendary shows of all time.

UK TOUR DATES AS BELOW