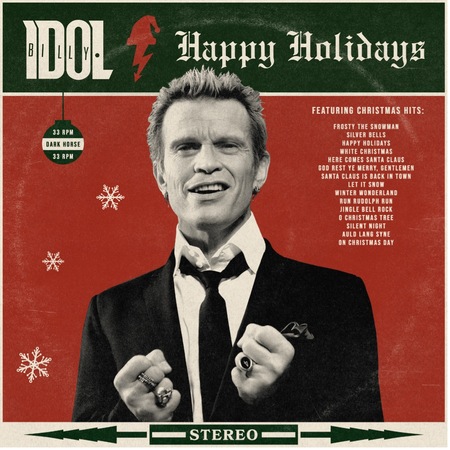 Billy Idol is releasing a remixed and remastered version of his Christmas album, Happy Holidays, for the first time on vinyl and streaming platforms via Dark Horse Records. Originally released in 2006, the album features Idol performing a wide variety of Christmas classics as well as the new original bonus track, “On Christmas Day,” which features Steve Stevens on guitar.

Produced by Idol and Brian Tichy, the new release of Happy Holidays has been remixed and remastered by Paul Hicks, known for his work remixing classic records from The Beatles, George Harrison, John Lennon and The Rolling Stones. Happy Holidays has also been packaged with new artwork and is available for purchase on black vinyl, CD, digital and on limited edition white vinyl. Fans can pre-order Happy HolidaysHERE.

“Before our 2006 European tour, I recorded a number of seasonal songs,” recalls Idol. “A tree-trimming, fireside, Christmas Eve, Christmas Day intimate album was the result. Most probably essential at Christmas, is that the music is in the spirit. Knowing that family, friends and children might be listening, I wanted a selection that would please all, while still exploring the awe and mystery that is Christmas.”

Most recently, Idol released The Roadside EP to widespread commercial success, debuting at #12 on Billboard’s Top Album Sales Chart while the hit single “Bitter Taste” appeared within the Top 15 at Triple A Radio. In addition, the new music received critical praise; USA Today proclaimed, “The songs are familiar, yet instilled with renewed vigor” and American Songwriter furtherd, “He’s making music that boasts the same rumble and grumble he yielded before…the Bad Boy is indeed back.” Earlier this month, Idol performed “Bitter Taste” on “Jimmy Kimmel Live!.” Produced by Butch Walker (Green Day, Weezer) and featuring Idol’s longtime lead guitarist and co-writer Stevens, The Roadside was conceived, recorded and mixed almost entirely under the shadow of the pandemic.

For forty-five years, Billy Idol has been one of the faces and voices of rock’n’roll, with an artistic resume to match the brilliant light of the image. First as the camera-ready front man for Generation X, between 1977 and 1981 Idol emerged with three albums that made positivity, emotional depth, and high pop synonymous with punk rock. In 1982, Idol embarked on a remarkable transatlantic/trans-genre solo career that integrated clubland throb, wide-screen depth and drama, rockabilly desperation, the bold and simple lines of punk, and rock’n’roll decadence.

Happy Holidays is the latest release on the newly relaunched Dark Horse Records, a label initially created in 1974 by George Harrison and now led by Dhani Harrison and David Zonshine. Other artists currently on Dark Horse include George Harrison himself, Joe Strummer and Ravi Shankar. “I couldn’t be more excited to welcome Billy Idol to the Dark Horse Records family. Billy is a legend, and his music couldn’t fit the Dark Horse persona any better. I’ve loved his music throughout my whole life, so to be able to give this new music a home on our historic label is a massive honour,” says Dhani Harrison.