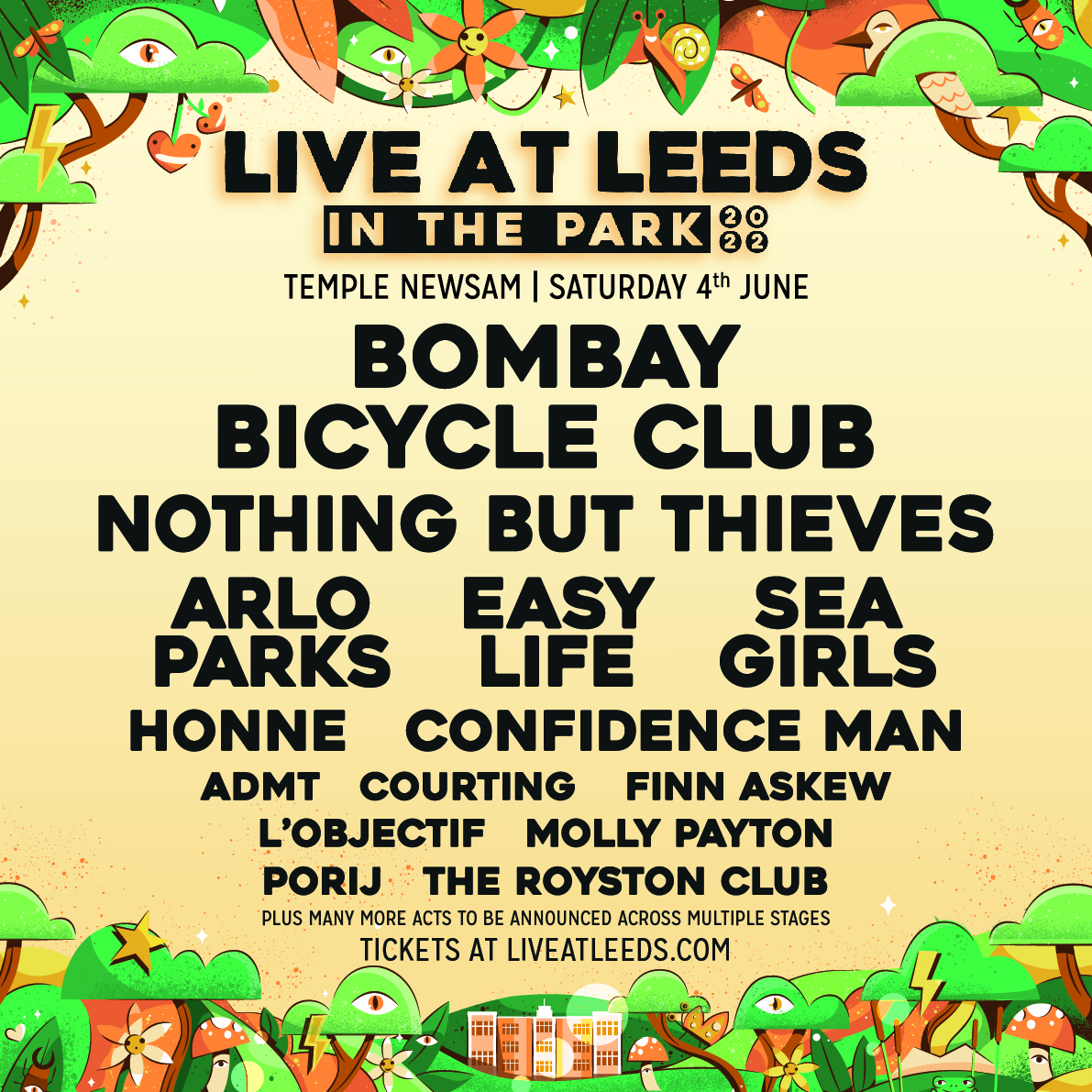 Renowned for its staggering reputation as one of the leading tastemakers in new music and after 15 years of remarkable festival celebrations where fans discover their next favourite band first, Live At Leeds is expanding with the launch of a brand new one-day festival in 2022 – Live At Leeds: In The Park.

Taking over the famous Temple Newsam Park in Leeds, Live At Leeds: In The Park promises to be a crowning festival day, continuing those early steps that Live At Leeds have become synonymous for across its city-centre roots and graduating to the grand stages of a huge outdoor festival. Filled with artists who first made their mark in years gone by In The City, their journey continues as Live At Leeds adds a star-studded second show to its yearly calendar – setting itself apart as the only voice you need to follow on the best in new music. Spanning five stages stacked with phenomenal moments and offering the chance to witness your new favourite artists on the biggest stages rubbing shoulders with leading headline greats – it’s the next evolution of the Live At Leeds story and the perfect way to kick-start your festival summer.

Leading the first wave of names for the inaugural Live At Leeds: In The Park is a true indie institution in Bombay Bicycle Club. Regularly revered as one of the most seminal British bands of the past 15 years, Bombay’s rich catalogue is filled with the sort of anthems that have come to soundtrack modern life’s highs and lows. Since the release of ‘I Had The Blues But I Shook Them Loose’, they’ve continued to evolve and grow into one of the most exciting and creative bands in modern memory – with cuts like ‘Evening/Morning’, ‘Shuffle’, ‘Always Like This’, ‘Luna’, ‘Carry Me’, ‘Eat, Sleep, Wake (Nothing But You)’ and more all becoming undeniable favourites. First appearing at Live At Leeds back in 2009, their reformation a decade later feels like it was written in the stars – making them the perfect headliner for Live At Leeds’ next exciting chapter at Live At Leeds: In The Park!

Speaking about their headline show at the very first Live At Leeds: In The Park, Bombay Bicycle Club said:
“We are delighted to be returning to Live at Leeds next year to help launch their new festival Live at Leeds: In The Park. We last played Live At Leeds thirteen years ago when we were releasing our first album… and though a lot has changed since then, our excitement to come and play is the same as ever. Can’t wait…”

Joining Bombay Bicycle Club across the festival is a stunning mix of world-class talent. Fresh from their biggest headline tour to date (including a night at London’s O2 Arena), Nothing But Thieves bring their intoxicating blend of heavy riffs, raw songwriting and melding electronica to Live At Leeds: In The Park after first appearing at Live At Leeds back in 2014 – evolving to deliver a set that’ll have a packed field moving from start to finish. Boasting one of the most critically acclaimed debut albums of the year, Arlo Parks heads to Temple Newsam for a gorgeous set of powerful songwriting and earnest desire. With BRIT Awards, sold-out headline tours and a wealth of fans across the planet – Arlo’s set is sure to be a highlight of jaw-dropping ambition as those next steps are made at Live At Leeds: In The Park.

Two acts who have gone on to become leading beacons for modern alternative music in their own distinct way since their first early appearances at Live At Leeds in years gone by, Easy Life and Sea Girls will be touching down for grandstand moments at Live At Leeds: In The Park. Continuously marked as one of the most thrilling live bands in the UK, Easy Life’s genre-bending cuts stormed the UK charts with the release of debut album ‘Life’s A Beach’ – and if their crowd-surfing exploits are anything to go by from their last appearance at Live At Leeds back in 2019 as things well and truly began to heat up for them, Temple Newsam will bear witness to something special come June 4th. Likewise, Sea Girls will continue their mark to the top of the indie pyramid with an appearance soaring with arms-in-the-air moments first seen across Live At Leeds in 2018 and 2019. Already set to release their second album ‘Homesick’ in January, expect by the time Live At Leeds: In The Park comes round that they’ll be ready to seize every singalong memory.

Perfecting their own distinctive swooning sound, Honne have established themselves as a beloved phenomenon across their three studio albums – with latest LP ‘Let’s Just Say The World Ended A Week From Now, What Would You Do?’ sure to sound effortlessly sweet at Temple Newsam next summer. A true highlight of Live At Leeds 2019, nobody puts on a party quite like Confidence Man. The Aussie duo have become synonymous for their tongue-in-cheek bubblegum disco-pop, and with new music on the horizon – it simply would be impossible to celebrate the next exciting chapter for Live At Leeds without them. All coming to Live At Leeds: In The Park, it ensures everywhere you turn there’s another unmissable performance – making the day an undeniable must for summer 2022.

Honne said:
“We are so excited to play Live At Leeds In The Park in 2022. It feels like an eternity since we played a festival, and playing in Leeds with this incredible line-up is going to be really special.”

Building on that legacy and passion for championing and highlighting the very best in new music; their continued mission to introduce your next favourite band first continues across the festival’s five stages. From the breakthrough alt-pop moves of Finn Askew, the off-kilter hooks of Courting, the jukebox indietronic grooves of Porij and the raw warm edges of Molly Payton to local Leeds favourites seizing the new music spotlight in L’Objectif and many more to be announced – Live At Leeds: In The Park is the only festival bringing the future to the present. With The Royston Club and ADMT also confirmed today, they sit as an appetising tease of a huge lineup that sets Live At Leeds: In The Park aside from the rest.

Speaking about their own Live At Leeds journey, Courting noted:
“We played Live At Leeds: In The City this year, not knowing what to expect and then greeted a crowd of about 500 people going wild at 2pm. We can’t wait to translate that to playing for everyone In The Park next year.”

It all comes together for the sort of festival experience that new music fans have been crying out for. Continuing the history of Live At Leeds that has welcomed through the biggest artists on the planet over the years, Live At Leeds: In The Park is set to become a must-visit destination for those looking for their fix of unforgettable festival memories.

Speaking about Live At Leeds: In The Park, Festival Promoter Joe Hubbard said:
“We’re incredibly excited to release the first ever Live at Leeds In the Park line up. After the most difficult couple of years it felt amazing to deliver Live at Leeds In the City this year, and following it up with this brand new event for 2022 makes the future feel really positive. Hopefully everyone loves this line up as much as us, and our loyal Live at Leeds crowd enjoy having 2 festivals to look forward to in 2022!”

Tickets for Live At Leeds: In The Park go on general sale from 10am on Friday 12th November, with special VIP tickets available from £75 and General Admission tickets starting from £55 (excluding booking fees) – available from:
https://www.liveatleeds.com/