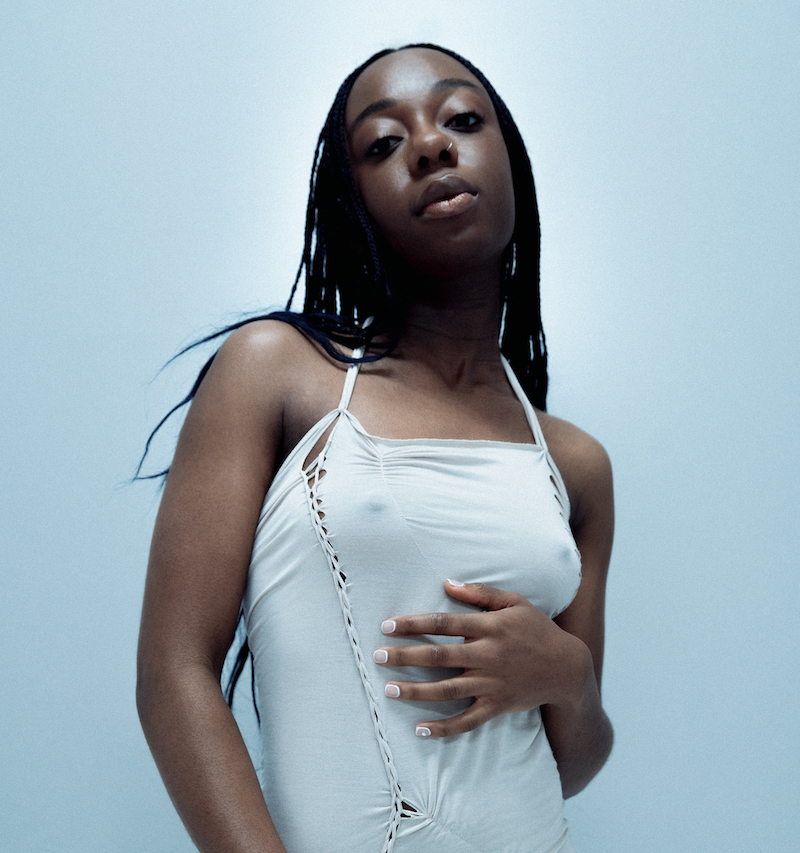 Audiovisual artist, vocalist and experimental producer DEBBY FRIDAY is back with a new single & video, “FOCUS“. The track originally premiered on Adult Swim on their latest Digitalis compilation.

Speaking about the meaning behind the song, FRIDAY said “I wrote this song in 2019, when I first started thinking about writing an album and the possibility of pursuing my creative passions as my career was making itself known to me. I kept debating with myself, ‘do I want this? or do I not want this?’  It’s a heavy question. The video also speaks to this. The whole process was like undergoing some sort of fire baptism. It was difficult and chaotic and supernatural. I felt like I was the mountain, cracking open and spilling forth.”

The video for “FOCUS“, filmed on 35mm, opens on the astonishing scene of a live avalanche – a torrent of snow flying across a frozen mountain range. The vision behind it was created by FRIDAY herself and director Ryan Ermacora.

“The shoot took a few days, spread out over a week. First, Ryan and Jeremy went to film the avalanche in Kaslo. The avalanche crew had to take them up in a tiny helicopter with all the gear to an adjacent mountain so that they could set up the dynamite and then we could get the shot. Once that was done, myself and a skeleton crew drove out to Cache Creek to shoot in the mountains there,” said FRIDAY. Shot across various locations in British Columbia, we watch as FRIDAY runs through a deserted forest and icy woods, glitching between daytime and nighttime. The desolate frigid landscape is juxtaposed with the striking imagery of her bullwhip choreography. The blazing whip cracks in the twilight air as she stands fierce and unrelenting, decked out in futuristic winter gear. Paired together, the trumpeting bass and spellbinding images make for a vision of an apocalyptic future where FRIDAY has become the last woman on Earth.

On making the video, FRIDAY stated, “Getting the logistics of everything together was the most stressful part. It’s not everyday that you have to figure out how to make an avalanche and take fire bullwhip cracking lessons. Thankfully, I had a really supportive crew the whole way through. It took a lot but I feel like this song and video marks a turning point for me that I can’t exactly name yet.”

After finishing her Master of Fine Arts degree earlier this year, FRIDAY has set her laser focus on her forthcoming LP. With a secret title and rumoured accompanying short film, DEBBY FRIDAY is not slowing down anytime soon.

Born in Nigeria, raised in Montreal and now based in Vancouver, FRIDAY released her debut self-produced, rap adjacent EP, BITCHPUNK in 2018. In 2019, Deathbomb Arc ushered in her second, critically acclaimed EP, DEATH DRIVE, which throbbed with eroticised electropunk fervour and cleared a path for self-actualisation. FRIDAY also created and directed her “FATAL” video, which was subsequently nominated for the 2020 Prism Prize Award, as well as her first short film, “BARE BONES“. Earlier this year, FRIDAY released the video for her single, “RUNNIN“, and also shared “LINK SICK” – an audio-play written, directed and scored by FRIDAY herself. She is currently working on her debut full length, and will be appearing at Substance Fest in Los Angeles on November 28.