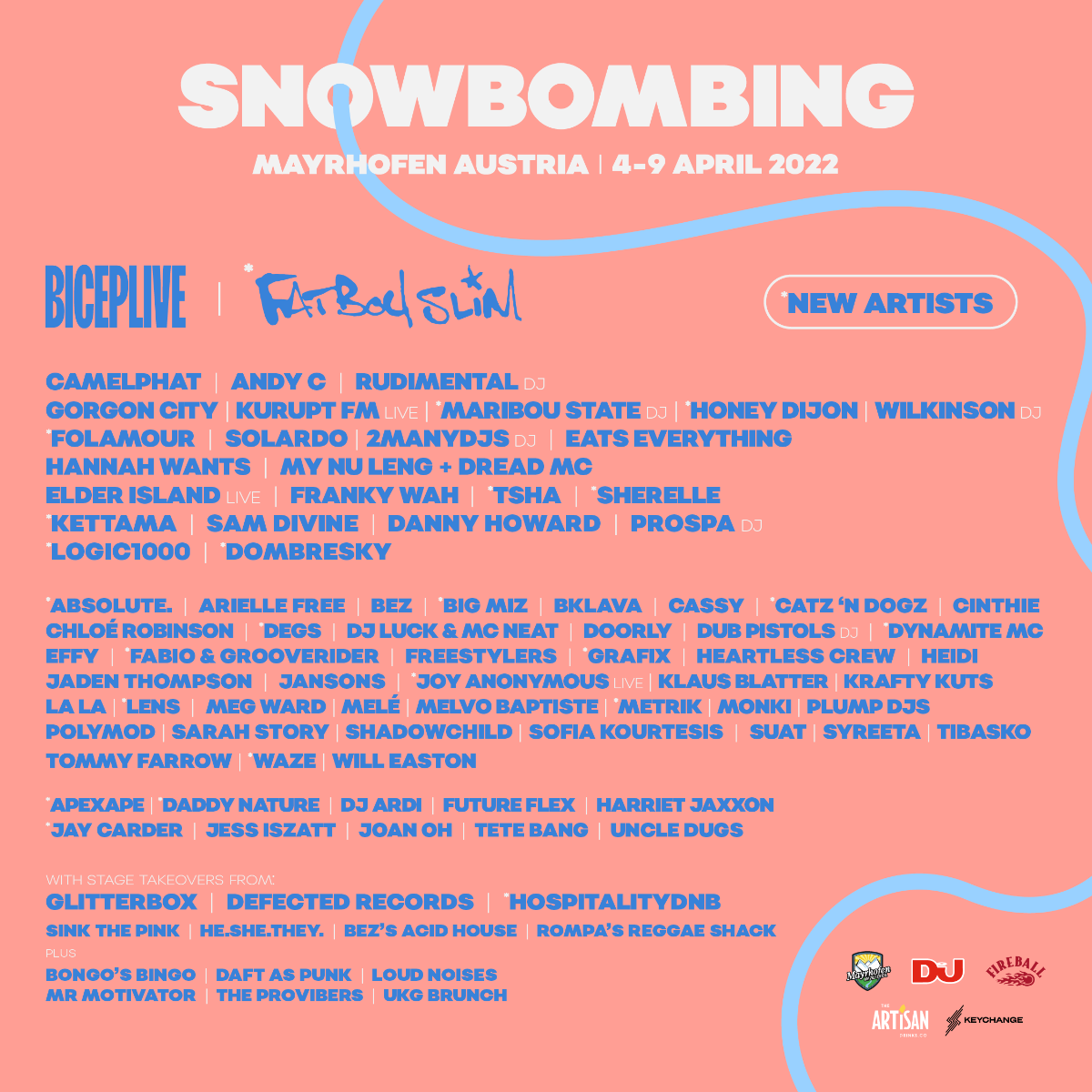 The Original. The Best. The Ultimate Alpine Festival Adventure. An iconic global party that has become synonymous for the biggest and best celebrations Europe has to offer, Snowbombing’s return in 2022 is two years in the making – and Mayrhofen just itching to welcome party-starters back. Returning in emphatic style, even more names are set to join The World’s Greatest Show On Snow – bringing together phenomenal live moments, the best parties on the planet and an assortment of the wacky and wonderful characters that make Snowbombing unlike anything else you’ll experience in 2022.

Leading the new batch of programming announced today is true Snowbombing royalty, Fatboy Slim. Responsible for some of the biggest moments in the festival’s history, he has blazed a trail across his incredible career – elevating electronic music to the global powerhouse the scene now stands at today. With a catalogue of undeniable bangers that have travelled from generation to generation, Fatboy Slim continues to innovate and push the boundaries of what it means to dance together and celebrate in a fashion that only Norman Cook knows how. Returning for a special set headlining the jaw-dropping Forest Stage, the keys to Mayrhofen and Snowbombing fall into the hands of the very best. There’s simply nobody better.

Trying something you’d never get the chance to. Exploring a stunning landscape and village full of bustling culture and unmissable moments behind every door. Snowbombing is more than just a week-long alpine getaway. It’s the experience and party you’ll be talking about for years to come, desperate to return to be amongst your fellow Snowbombers. Continuing its highlight status as part of the Snowbombing experience, 2022’s Street Party finds itself the perfect host with the team at Glitterbox bringing their star-studded vibes to the streets of Mayrhofen with the Glitterbox Street Party. Announced today, the Street Party will feature the glorious sounds of Honey Dijon, alongside a thrilling lineup that includes French party-starter Folamour and Glitterbox resident Melvo Baptiste – for a party full of the jaw-dropping sights and inclusive atmosphere that makes Snowbombing what it is today.

Across Snowbombing’s phenomenal venues and stages, each minute of each day is primed to feature a new memory fans will be talking about for years to come, assembling a true G.O.A.T of a lineup that marks its grand return. Maribou State (DJ) head to Snowbombing next year with a rich history of spine-tingling sounds that are sure to catch the attention when they take to the stage, whilst the likes of TSHA, Sherelle, Logic1000, Dombresky, Kettama, Fabio & Grooverider and Joy Anonymous (Live) all bring their own distinct flair and gravitas to a festival experience that goes beyond any expectations. With special takeovers continuing from the likes of Defected, Sink The Pink, He.She.They and HospitalityDnB (with Metrik, Grafix, Degs and Lens announced today as part of the festival’s huge drum and bass lineup), Snowbombing lives and breathes in the biggest parties on the planet in the most sensational settings you’ve ever ticked off your bucket-list.

These new names cement Snowbombing as an experience that every festival and party-loving fan simply needs to attend at some point in their life. With the previously announced force of names such as headliner Bicep (Live) alongside the likes of Camelphat, Andy C, Rudimental (DJ), Kurupt FM (Live), Wilkinson (DJ), Gorgon City, Hannah Wants, Solardo, Eats Everything, 2manyDJs, Danny Howard, Monki, Heidi, Sam Divine, Elder Island (Live), Cassy and many many more – Snowbombing 2022 looks to be the welcoming return to unbridled European festival adventure that we’ve all been waiting for. Unpredictable. Unrivalled and Unlike anything else, The World’s Greatest Show On Snow is back to remind the world what they’ve been missing.

Exploring Mayrhofen and exploring Snowbombing is a time to leave your cares and worries at the door (and boy, have we had a few of those since the last time we were back right?!). Snowbombing provides the chance to party in spectacular locations including the Forest Stage, The Racket Club, The Street Party and more, not to mention the Spas & Saunas, Paragliding, Chairlift Speed-Dating, Alpine Yoga, Cable Car Raves, Comedy & Talks, an award-winning Snow Park and so much more.

From waking up to stunning skies and lounging in pools and jacuzzis across Mayrhofen, to taking to the skies with paragliding as you look down on the vast scenery in front of you, to gathering up the crew and heading to Mountaintop Brunches helmed by the likes of Bongo’s Bingo or the unstoppable UKG Brunch, and limbering up with a wink and a smile from Snowbombing’s resident doctor of vibes Mr Motivator – Snowbombing is a living and breathing nation born to be together once again. An invitation to make Snowbombing your home too, you’d be foolish to turn it down in 2022.

After an incredible reaction to Snowbombing’s return in 2022, only a limited number of festival packages remain – with fans encouraged to snap up tickets ASAP in order to secure your place in Mayrhofen next April! Ticket packages are on sale now at:
https://snowbombing.com/