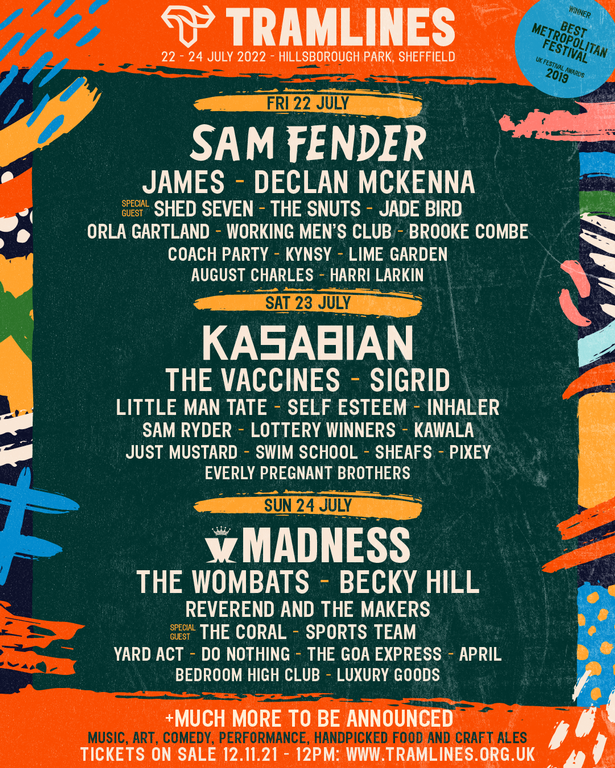 Alongside this first wave lineup announcement, Tramlines also reveals that Day tickets will go on sale on Friday 12th November at midday. 75% of Weekend tickets have already sold so only a very limited number remain. Day tickets for Tramlines are priced from £50 and Weekend tickets at £130 (both plus booking fees) and can be purchased alongside VIP ticket options from www.tramlines.org.uk. Sign up for ticket alerts here: https://bit.ly/TL22SignUp.

Tramlines 2022 takes place following an exceptional event in 2021 where the festival took place as part of the Government’s Event Research Programme. It was the largest festival in Western Europe to go ahead since lockdown restrictions were eased and marked a national celebration of the return to live music.

Timm Cleasby, Tramlines Operations Director said, “After the amazing spirit that everyone brought to Tramlines 2021 and how the team delivered an amazing festival in challenging times, we’re all back working hard to make 2022 better than ever. I honestly can’t wait to be back in the park and having a blast with Sheffield again.

“There are so many great bands on the 2022 lineup. Those I’m really looking forward to catching are Sigrid, Kasabian, The Coral, Orla Gartland and James, and there’s some great Sheffield artists that I’ve been looking forward to seeing for a while too, the amazing Self Esteem, the return of Little Man Tate and our friends, Reverend and The Makers to name a few. Then to finish off the party, Madness will be sending everyone dancing back to their house…Tramlines 2022 is gonna go off.”

Headlining ‘Sarah Nulty’s Main Stage’ on Friday night is Sam Fender with two Number 1 albums now under his belt. The newly formed but better than ever Kasabian take the lead on Saturday night, while Madness finally get to deliver a long-awaited set following the postponement of Tramlines in 2020 where they were originally due to headline.

Other lineup highlights include James who will be bringing the most festival-ready tracks from their 39-year long career; the frenetic five piece The Vaccines who’ll be dropping classics such as ‘Norgaard’ and ‘If You Wanna’; Americana/alt-rocker Jade Bird; the Norwegian pop sensation Sigrid; and the Mercury Prize-nominated Sports Team who make a triumphant return to Hillsborough Park following their appearance in 2019 – anyone recall Alex Rice’s crowd surfing in the Leadmill tent?

Ever with its finger on the pulse of breaking talent, the Tramlines 2022 lineup shines a light on some of the most exciting new acts around. These include the gritty indie-folk artist Orla Gartland who dropped her debut album ‘Women on the Internet’ this August; the melodic, indie-pop rising star Pixey who has just released her second EP on the influential Chess Club label; the guardian tipped ‘one to watch’ outfit Coach Party; and guitarist-singer Sam Ryder who shot to fame with his cover versions during the pandemic resulting in TikTok crowning his the most popular UK artist account of 2020.

A Tramlines lineup wouldn’t be complete without a solid injection of Sheffield’s finest. For 2022, crowds can expect homegrown sets from Jon McClure’s Reverend and The Makers; Self Esteem (aka Rebecca Taylor formerly of Slow Club); Little Man Tate in their highly anticipated return since their farewell in 2009; and arguably one of most attended performances of the entire Tramlines weekend, The Everly Pregnant Brothers who’ll bring the power house of parody, charm and sing-a-long vibes.

Plenty of up and coming local acts have also been revealed including Bedroom High Club, Luxury Goods, Sheafs and August Charles. Bedroom High Club are a 4-piece new age indie band who have become firm Tramlines favourites since debuting in 2019. Luxury Goods are the new incarnation of LIO and have just announced a Leadmill show in December whilst Sheafs are riding high following their debut EP ‘Vox Pop’ in 2020. August Charles is a fantastic new vocalist from Doncaster who made his Tramlines debut last year as a winner of the ‘Apply to Play’ competition.

This is just the first wave of talent set to perform at Tramlines 2022. Festival-goers should keep an eye out for further lineup announcements, plus further announcements from across the festival site including, comedy and cabaret, family fun, fabulous food and drink offerings and much more.

Keep up to date with all the latest news and announcements at www.facebook.com/tramlines­.