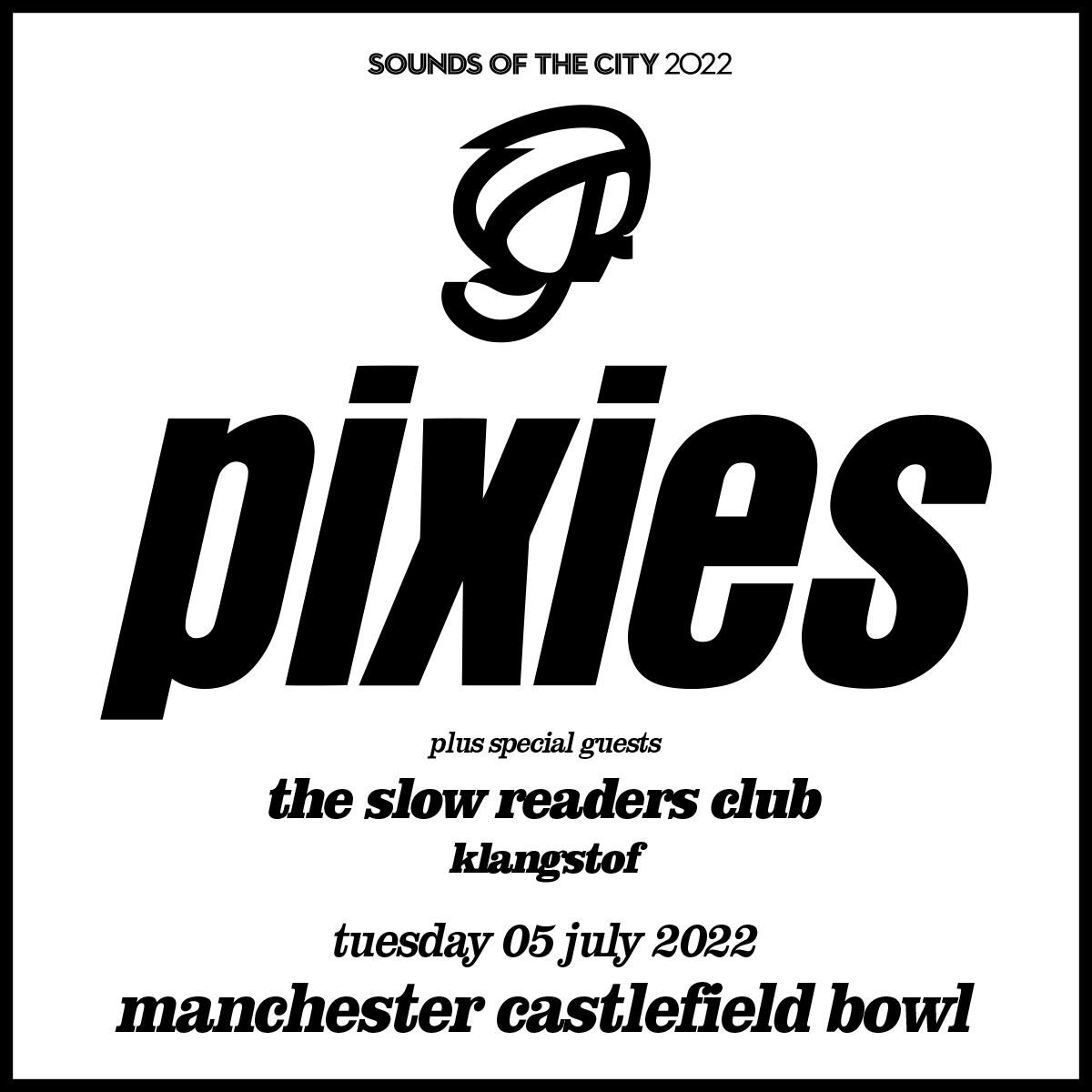 SOUNDS OF THE CITY PRESENTS PIXIES AT MANCHESTER CASTLEFIELD BOWL

Pixies, one the most influential, pioneering bands have announced their return to Manchester’s Castlefield Bowl for Tuesday 5th July 2022 – eight years after their acclaimed headline show. Tickets go onsale Friday 19th November at 9.30am via www.Gigsandtours.com, www.ticketmaster.co.uk and www.pixiesmusic.com. Pixies will be joined by Manchester live favourites The Slow Readers Club and the Dutch alt-pop trio Klangstof (the first Dutch band to ever play Coachella).

Pixies have been lauded as the most prominent and innovative band of the late 80s alt/rock movement, having blazed the trail for artists from Nirvana to Radiohead to Pearl Jam. Over the past decade or so, a whole new generation of music fans have been discovering the band’s iconic “loudquietloud” signature sound.

After five genre-defining studio albums — including the now-Platinum-certified Doolittle – Pixies disbanded in 1993, and then launched their reunion tour in April 2004, playing to sell-out crowds across the globe for 15 years, a far longer period of time than they were a band originally.  But writing, recording, and releasing new music was something that the band had been wanting to do for a long time, so they secretly booked studio time in Wales for the fall of 2012. Six days into the recording, founding bassist Kim Deal decided to leave the band; Black Francis, Joey Santiago and David Lovering made the decision to carry on, finishing and releasing the band’s first studio album in more than two decades, 2014’s Indie Cindy.

Also wanting to play live, the three began working with a number of touring bassists, including former A Perfect Circle bassist, Paz Lenchantin who came out on the road with the band in 2014. The band welcomed her as Pixies’ permanent bassist in 2016. Since then, Pixies have released two more studio albums:  Head Carrier in 2016, that marked Paz’s recording debut with the band, and 2019’s Beneath the Eyrie that was recorded with producer Tom Dalgety.

Also in 2022, Pixies will release box set Live In Brixton, which will be released on January 28th.  The band’s Brixton shows in 2004 live long in the memory of the band as well as their legions of fans. Pre-order here

Dates, album and ticket information can be accessed at www.pixiesmusic.com