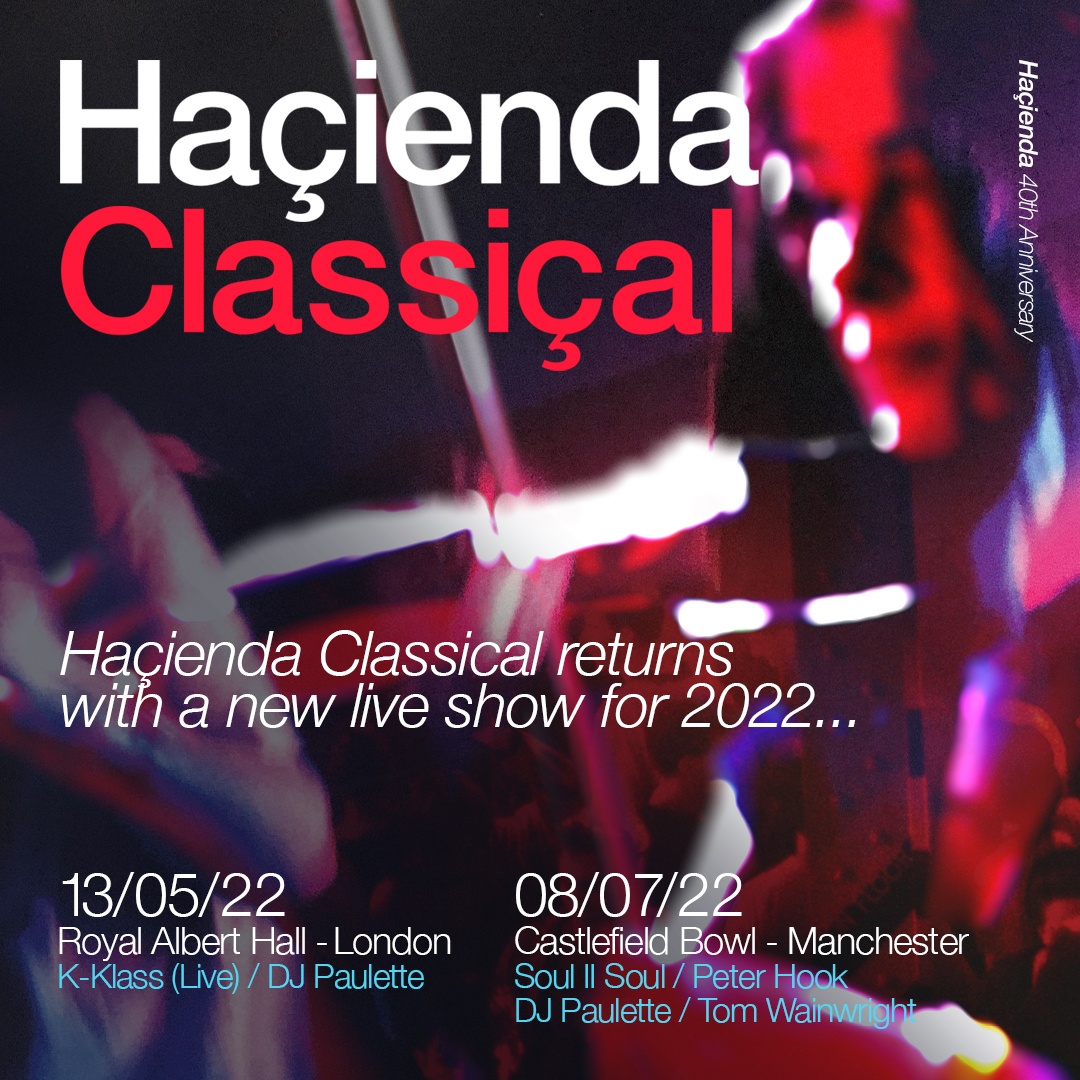 2022 marks four decades since FAC51 The Hacienda first flung open its doors back in 1982, transforming the run-down Central Manchester yacht showroom into what has become one of the most iconic and influential nightclubs in history.

The Hac chronicled the emergence of indie to the mid 80’s and then redefined club culture as the scene adapted to the emerging dance music sounds of the UK and the US changing the cultural soundtrack.

Considered the UK’s cathedral of house music and then epicentre of the “Madchester” scene, The Hacienda continues to inspire generations new and old, producing world class events that remain true to the ethos and integrity that guided the original club.

Celebrating forty years of The Hacienda all across 2022, our first Hacienda Classical events to be announced include Hacienda Classical back at Castlefield Bowl Manchester Friday 8th July 2022 for what has now become our annual homecoming party, sold out year on year and now taking place for a record six times.

Also a much awaited return to London’s Royal Albert Hall takes place on Friday 13th May 2022, our fifth at the prestigious venue having sold out our previous four visits.

With all previous Hacienda Classicals at both venues fully selling out tickets are expected to be in high demand.

Taking in well known favourites and new versions of club classics all mixed continuously into one non-stop set, Hacienda Classical is now entering its seventh year and has performed to audiences nearing 750.000, with more reportedly tuning into our recent successful streams.

The collaboration between The Hacienda, Manchester Camerata, DJ Graeme Park and musical director, Tim Crooks has proved remarkably enduring, especially with the revisions and renewals made year on year to the set.

“It’s amazing for myself and Hacienda Classical to be back at Castlefield Bowl for our sixth show and also our fifth appearance at Royal Albert Hall. It’s astonishing what we’ve all achieved since 2016 and I’m really proud of everyone who’s taken part. To see it going from strength to strength makes all us very proud.” Graeme Park

Hacienda Classical has well outperformed any expectations at the outset and has seen tremendous reactions from audiences and critics many of who have awarded the show five stars, even at the very first Bridgewater Hall show, The Times gave it top marks declaring that “theatmosphere was incredible.”

Similar rave reviews followed from the first Royal Albert Hall visit as NME called it “Probably the best rave since 1997″ whilst Mixmag termed the event. “a near two hour blend of house music’s greatest players with an audience dancing and singing from the off.“

Hacienda Classical has continued to receive 5 star reviews from the like of The Independent – “It doesn’t get much better than this. A powerful, poignant performance.” – and its hometown paper, Manchester Evening News.