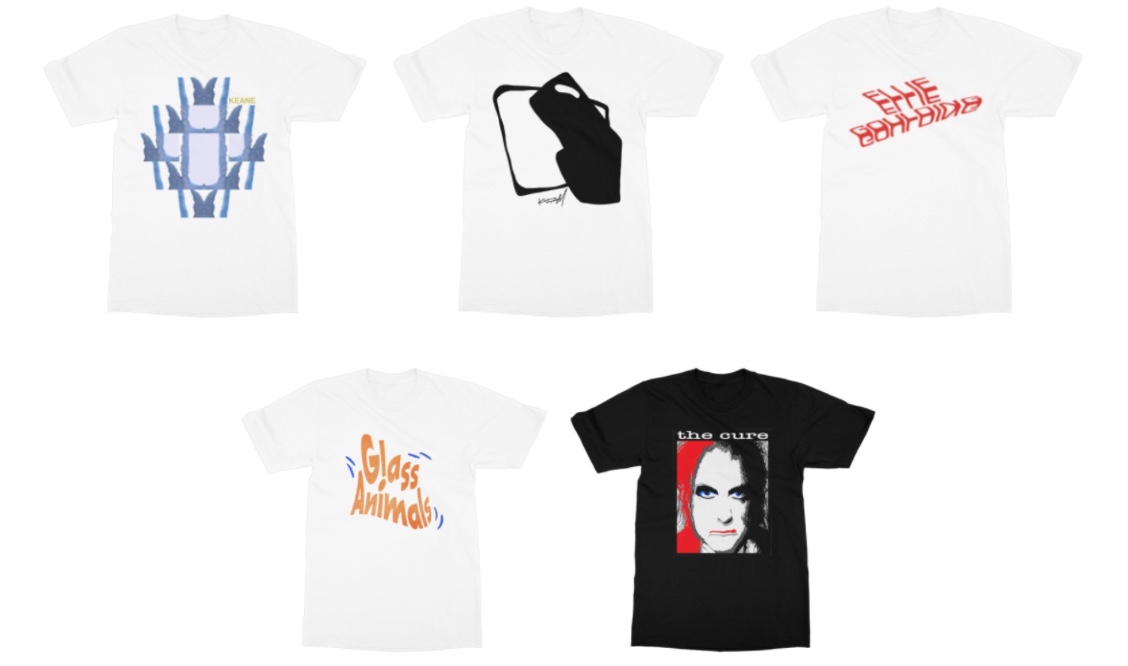 Today, the charity Trekstock have continued their 2022 Merch For Good fundraising campaign, launching the second wave of exclusive T-shirts designed and donated by some of the world’s best artists and musicians. 100% of the profits from each sale goes to Trekstock – the only charity that provides tailored social and practical support nationwide to young adults in their 20s or 30s as they live with, through and beyond cancer.

The second wave of T-shirts include exclusive designs from global pop sensation Ellie Goulding whose tee is emblazoned with her futuristic logo; alt-rock icons Keane; Scottish singer, songwriter and musician KT Tunstall‘s whose T-shirt features a stunning monochrome design that was hand-drawn by the singer herself; punk-rock band Frank Carter & The Rattlesnakes; acclaimed actor and singer Jamie Campbell Bower; the iconic Yusuf / Cat Stevens whose design was hand-drawn by him back in the 70’s and donated to Trekstock for Merch For Good; and Italian gothic metal band Lacuna Coil.

Trekstock will release the third and final phase of the exclusive T-shirts in March, with exclusive merchandise from the chart-topping artist Yungblud, The Spice Girls’ Mel C, You Me At Six, Pale Waves, Jack Savoretti, Don Broco and Razorlight.

This year’s Merch For Good campaign launched on February 4th 2022, World Cancer Day 2022. Since the launch, they have raised a massive £30,000 for young adults living with cancer from the exclusive T-shirts, still available to buy, from the biggest band in the UK right now Glass Animals, The Cure who are the first artist to give two designs to the Merch For Good fundraiser, Blossoms whose T-shirt features the artwork to their latest single ‘Ribbon Around The Bombs’, The Snuts whose T-Shirt is made up of 34 smiles to represents the 34 young adults that are diagnosed with cancer each day, Bullet For My Valentine, Nothing But Thieves, The Damned and Simple Minds whose tee is an exclusive version of the artwork of their latest single ‘Act of Love’.

The first and second waves of exclusive T-shirts are available to purchase today via Trekstock / Merch For Good. 100% of the profits from each sale supports young adults living with cancer.

Each T-shirt is priced at £24.99 and is sustainably made to order, using water-based Eco Inks that are 100% non-hazardous, toxin-free and totally vegan.

Sophie Epstone, CEO & Founder of Trekstock, says: “As a small charity, we are always completely blown away by the level of support the music industry gives Trekstock. This collection is our biggest one to date and has the power to change lives. We could not be more grateful to all the artists and their teams who have donated their time and creativity to make a difference to the lives of those in their 20s or30s affected by cancer. We hope you love the designs as much as we do.”

Ellie Goulding says “I am happy to donate this exclusive design to the Merch For Good initiative by Trekstock. This charity does important work supporting adults in their 20s or 30s living with and beyond cancer and I am proud to support them.”

Jamie Campbell Bower says “I’ve supported Trekstock for a number of years and am so proud of the work they do. It is my pleasure to be working with them on the Merch For Good campaign and do what I can to support this wonderful charity”

Yusuf / Cat Stevens says “Cancer touches so many people and tragically implodes in so many homes, causing loss to families, without discrimination. I’m proud to support the cause.”

KT Tunstall says “Trekstock does amazing work to support young people in their 20’s or 30’s with cancer. I loved creating this hand-drawn design – inspired by the interconnection of Yin and Yang and how we need one another – for an exclusive t-shirt, in the hope to help them make a difference through Merch for Good.”

Dean Richardson of Frank Carter & The Rattlesnakes says “Merch For Good is an amazing campaign from Trekstock, raising money to support people through what is one of the most difficult things you can face in life. We’ll all be impacted by Cancer at some point, directly or indirectly, so if you’re reading this – pick up a t-shirt knowing your money will make a difference to those young people who are being impacted by it right now.”

Jesse Quinn of Keane says “We’re honoured to be asked to be part of such a good cause. Cancer is a scourge that has caused sorrow to each and every one of us. Here’s to the day, hopefully soon, when it’s defeated.”

Andrea Ferro of Lacuna Coil says “We are really proud to be part of the “Merch For Good” campaign alongside so many great and generous artists. Sadly cancer is a part of many peoples lives so it’s really important that we all make the best effort to fight against it, together we can try to make a difference and “rise above the darkness”

Dave Bayley, frontman of Glass Animals says “Many of the people I love most in the world have suffered from cancer. Physical problems aside, I have seen the psychological and social side effects surrounding it overwhelm them. If each t-shirt goes a little way towards helping someone find their footing, it’s a huge win.”

Trekstock was founded in 2009 by Sophie Epstone after she became aware of a huge gap in tailored support services for those diagnosed with cancer in their 20s or 30s. The charity’s ambassadors include Harry Styles, Liam Payne, Mark Ronson, Andy Burrows, Ella Woodward and Dr Hazel Wallace.

and get involved at #MerchForGood