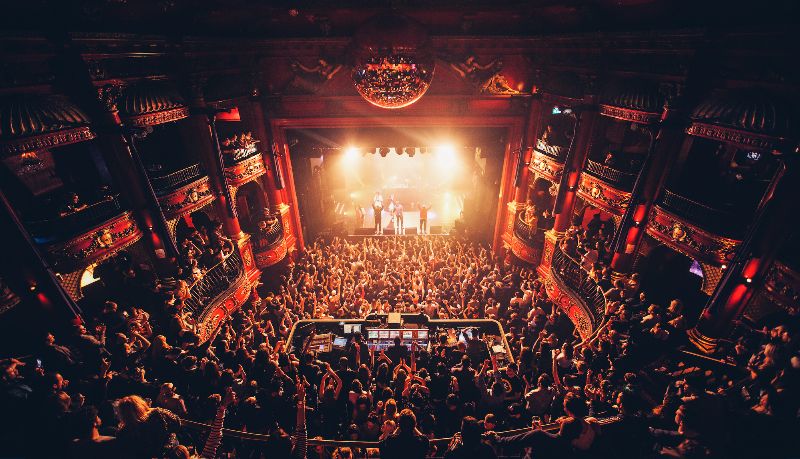 Charlie Chaplin twirled his cane on its stage, Monty Python and the Rolling Stones broadcast from its studios and Charles Dickens used to pop in for a drink. Madonna, Prince, Kanye, Amy Winehouse, Stormzy and Dua Lipa are just some of the musicians to have graced its stage.

Now, 122 years after it originally opened, KOKO will be throwing open its doors once again in April 2022 following a £70m restoration and redevelopment, which will see it transformed from the historic theatre into a 50,000 square foot state-of-the-art live music venue and broadcasting house.

The new KOKO will include the new Fly Tower ‘venue within a venue’: a 50 foot tall shaft housing the original 19th century machinery to operate the theatre stage, which was a surprise discovery during the restoration process, and stands alone as an intimate, 200 capacity venue within the theatre itself. In a Fly Tower show, the artist performs facing the reverse, with the audience on surrounding balconies and on the stage itself.

Today KOKO announces the first names to play its opening season – a series of events that represents the depth and breadth of contemporary, global music culture. On 26 May, British R&B singer Jorja Smith will play a headline show along with guests from her label, FAMM. She last played London when she headlined All Points East Festival in 2021 to critical acclaim. About the new KOKO, Jorja Smith said; “KOKO is an iconic venue and I am so excited to play there. The new design and spaces are stunning.”

Earlier in the month, kicking things off with a three-day residency over 9 – 11th May is Grammy award winning Lianne La Havas, a favourite of the late Prince, who last performed with him on stage at KOKO in 2014. The shows sold out in under 24 hours. Lianne La Havas said: “KOKO has been truly missed. It’s one of my favourite London venues and many of my favourite artists have played there. Having always wanted to do my own show at KOKO, I’m excited that I now have the opportunity to do that”.

Also confirmed for the live programme: fast-rising singer, songwriter, producer and favourite of Rihanna and Wizkid, TEMS (17 & 22 June); rock royalty Kim Gordon (23 May); Mercury Prize nominated jazz-meets-electronica ensemble GoGo Penguin (3 Nov); cinematic London instrumental act Portico Quartet (8 May); legendary father of the Ethio-Jazz movement, Mulatu Astatke (15 May), and British ska act The Beat (3 July). The new KOKO will continue on its mission to support a diverse selection of live acts across all genres. Nick Lewis, KOKO’s Head of Music (formerly Ronnie Scott’s), said: “I’m so excited about our opening season and the quality and eclectic nature of our line ups. Putting together this mix of talent is exactly what we love doing.”

KOKO Electronic is a new brand which will run on Friday and Saturday nights until 6am in the main theatre and will comprise the most exciting electronic music artists and brands from around the world – from house, techno and disco to world music & rap. Andy Peyton, KOKO’s Head of Electronic (formerly XOYO, Phonox) said: “It’s never been a more exciting time to mark a new chapter for electronic music in the capital. London is a global epicentre of talent and KOKO Electronic will be a great new addition to this amazing city.”

In addition to the newly launched Fly Tower venue and the beautifully restored 19th century theatre, KOKO will return with two new venues on the ground floor for the public; a new shop/DJ space which will feature exclusive merch drops and artist collaborations, and a morning to late-night pizzeria and tap bar, with Cafe KOKO hosting intimate live performances for artists.

KOKO will also return with a new tiered membership offering. Those who become members of The House of KOKO will get members access to: a stunning new roof terrace and conservatory, dome cocktail bar, penthouse and recording studio, piano room, library, a hidden speakeasy, stage kitchen and vinyl rooms. Further spaces within the members’ floors will allow artists to perform in Ellen’s Jazz bar, acoustically on the roof terrace, in the penthouse studio, in the dome or in the stage kitchen.

High-spec broadcasting, recording and live streaming capabilities have been built into the fabric of the Grade II listed theatre and its new four storey extension which spans 50,000 square feet, meaning musicians now have access to a truly one-of-a-kind physical space and media facility. In the new KOKO, artists can not only perform live in one of the many new spaces, but can co-produce, stream and distribute their music to a global audience with the newly formed KOKO Studio, whilst a new KOKO radio station will help break new and emerging artists.

Olly Bengough, CEO/Founder, said: “It’s been a seven year journey to bring this project to life and now, on the cusp of opening, I’m so happy to be paying homage to the cultural legacy of the building with a diverse mix of artists and contributing to arts and culture at a time when British live music needs it most”

KOKO is proud to announce See Tickets as its official ticketing partner.

LISTINGS
For all times, prices and ticket links, visit www.koko.co.uk